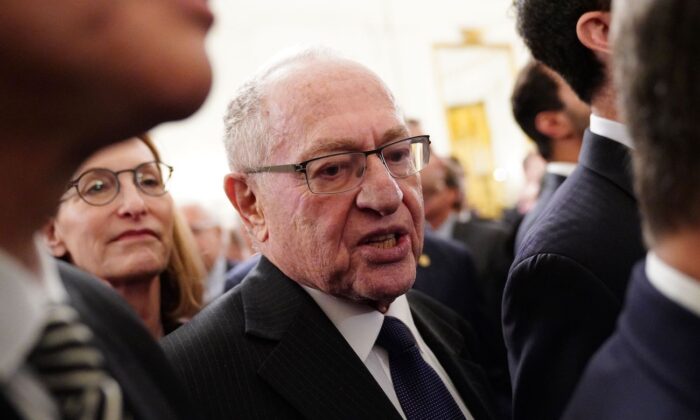 Attorney Alan Dershowitz said on Dec. 6 that he believes the Supreme Court may get involved in adjudicating on whether state legislators have the power to pick alternate Electoral College electors who would vote for President Donald Trump if legislatures determine there was voter fraud, even after an initial slate of electors has cast its votes on Dec. 14.

Dershowitz made the remarks in an interview with Fox News in which he was first asked about claims made by Trump attorney Rudy Giuliani, who said there was a pattern of fraudulent activity that swayed the election in favor of Democrat Joe Biden.

“There certainly is probable cause for investigating and looking further. Giuliani has made very serious accusations. The question is which institution is designed constitutionally to look into it? Is it the state legislature? Is it the courts? Is the clock running in such a way that there won’t be time to look into this?” Dershowitz said.

His reference to time running out presumably refers to the Dec. 14 Electoral College meeting, at which electors cast their presidential votes.

“The American public wants to know, is Giuliani correct or isn’t he correct? I don’t know whether we’ll find that out in time for the meeting of the Electoral College votes,” Dershowitz said.

Attorney Ken Starr, who also took part in the interview, said that a “bit of a nightmare” scenario has taken place in the form of claims of voter fraud relating to absentee and mail-in ballots and other irregularities.

“So what do we now do about it?” Starr said. “I think, to be honest, we’re running out of time, because the Electoral College meets on Dec. 14, so it’s going to take an extraordinary action by legislatures and so forth. And Rudy has rightly pointed to legislatures because therein lies the ultimate—other than the Supreme Court of the United States—ability to have an effect on the just-concluded election.”

In the interview, Dershowitz was asked about evidence Giuliani has presented, including surveillance footage and around 1,000 affidavits alleging various election-related irregularities and malfeasance.

“These are retail evidence that have to be determined to be true by cross-examination and witnesses,” Dershowitz replied.

Elections officials in states facing allegations of voter fraud and other election-related legal challenges brought by the Trump legal team and others have insisted that there’s no widespread voter fraud. Attorney General William Barr said on Dec. 1 that the Justice Department has, to date, “not seen fraud on a scale that could have effected a different outcome in the election.”

Dershowitz said the key question would be whether state legislatures, if they determine that significant voter fraud has indeed taken place, have the power to pick an alternate slate of Electoral College electors even after electors have cast their presidential votes.

Asked if he thinks that, if it decides to take up the case, the U.S. Supreme Court would be likely to rule that it was unconstitutional for Pennsylvania to extend the deadline past Election Day for receiving mail-in ballots, Dershowitz replied, “I think so.”

“I think that there’s a 5–4 vote now in the Supreme Court, and Justice Alito seemed to suggest that that would cancel out the votes in Pennsylvania that were received after the close of Election Day,” Dershowitz said. “Whether that’s right or wrong, that’s the way I predict the Supreme Court would decide the case if it decided to take the case.”

Dershowitz also suggested the establishment of a nonpartisan panel that would examine and make recommendations on claims of fraud and other related issues in future elections.

Meanwhile, an election integrity watchdog said the current Electoral College deadlines not only have “zero constitutional basis,” but are preventing states from fulfilling their legal and ethical obligations to ensure free and fair elections.

The Amistad Project of the nonpartisan Thomas More Society released a study (pdf) on Dec. 4, making the case that the only constitutionally set date in the election process is Jan. 20, when the next president of the United States will be sworn in. All other dates, including the “safe harbor” deadline, the Electoral College vote on Dec. 14, and even the congressional vote count on Jan. 6, are dates set by federal law, which the document argues are “arbitrary” and founded on obsolete concerns.