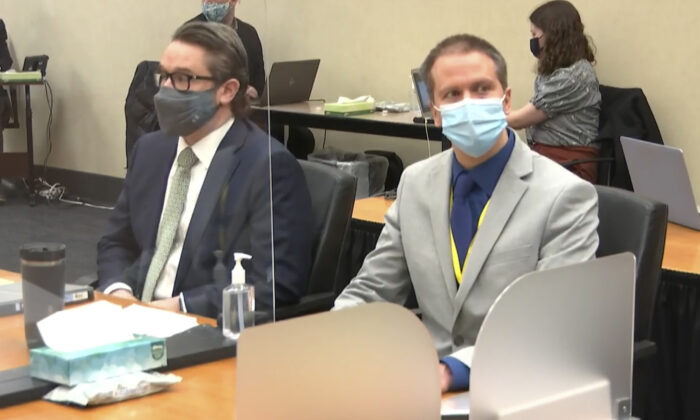 The defense attorney for former police officer Derek Chauvin filed a motion for a new trial on Tuesday.

Attorney Eric Nelson filed the request (pdf) to a Minnesota court arguing that a new trial should be granted in the interest of justice and because an abuse of discretion had deprived Chauvin of a fair trial. He also contends that Chauvin’s conviction was tainted by prosecutorial and jury misconduct, errors of law at trial, and that the verdict was contrary to law.

In support of his request, Nelson alleged a number of issues that he said would have affected the outcome of Chauvin’s trial including the refusal to move the trial over concerns of a tainted jury pool or failing to sequester the jury. He also argued that Judge Peter Cahill abused his discretion when he rejected a separate motion for a new trial over concerns that the publicity during the case could have affected the jurors’ judgment.

“The publicity here was so pervasive and so prejudicial before and during this trial that it amounted to a structural defect in the proceedings,” Nelson wrote.

Other issues include alleged errors by the judge throughout the trial such as when Cahill submitted instructions to the jury that failed to “accurately reflect the law with respect to second-degree unintentional murder, third-degree murder, and authorized use of force.”

He also alleged that the prosecutors had committed misconduct including disparaging the defense, improper vouching, and failing to adequately prepare its witnesses.

“The cumulative effect of the multiple errors in these proceedings deprived Mr. Chauvin of a fair trial, in violation of his constitutional rights,” he said.

Nelson is asking the court to order a hearing to impeach the verdict on the grounds that the jury “committed misconduct, felt threatened or intimidated, felt race-based pressure during the proceedings, and/or failed to adhere to instructions during deliberations, in violation of Mr. Chauvin’s constitutional rights to due process and a fair trial.”

The request comes days after prosecutors filed a legal brief arguing that Chauvin should be given a higher sentence due to a series of what they say are aggravating factors.

The aggravating factors, they said, include Floyd being “a particularly vulnerable victim”; Floyd being “treated with particular cruelty”; Chauvin abusing his position of authority; Chauvin committing the crime as part of a group of three or more persons; and the fact that multiple children were present when the crime was committed.

“Any one of these five aggravating factors would be sufficient on its own to warrant an upward sentencing departure. Here, all five apply. The State therefore respectfully requests that the Court find the facts necessary to support the existence of these five aggravating factors, and that the Court impose an aggravated sentence on that basis,” prosecutors said.

Under Minnesota law, second-degree unintentional murder, the most serious offense Chauvin was convicted of, is punishable by up to 40 years in prison. The starting presumptive sentence for a person convicted of that offense with no criminal history is 12 and a half years, according to the state’s sentencing guidelines (pdf).