Depth and Diversity Through Dance of Shen Yun 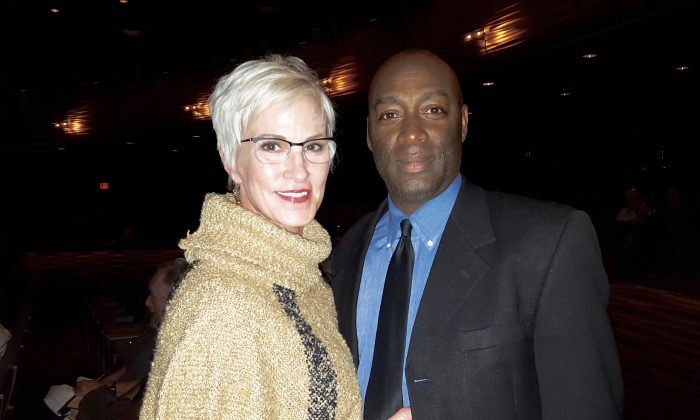 “The artistic expression through the themes … was absolutely wonderful,” Mr. Williams said. He spoke of the symmetry of the choreography, the precision in the lines of the dancers, the completely cultural experience of watching classical Chinese and ethnic and folk dances, and how it was all put together. He called it cinematography in theater.

“To me it was visually intoxicating,” he said.

Ms. Tate was captivated by the idea of it all—all 5,000 years to depict, the 50-plus ethnic minority groups to draw from in the ethnic and folk dances.

“I loved the culture and all the costumes, just the tradition behind it,” Ms. Tate said. In awe, she compared the United States—not even 300 years old—to a dance set in the year 353, where a group of scholars composed a famous anthology of poems.

The two are accustomed to seeing dance—modern, ballet, and theater—but like most audience members, this was an introduction to classical Chinese dance.

As Shen Yun explains, this is an independent dance system that has truly been passed down and refined over thousands of years, soaking up wisdom from every dynasty. It is the foundation of what Shen Yun performs and used as a base for the ethnic and folk dances it presents as well.

The dance form is characterized by its unique ability to be incredibly expressive as the dancers emphasize “yun,” which translates to something like the feel behind a movement, Shen Yun’s emcees explained.

Through this, Mr. Williams could feel the hearty cheer and power of the Mongolians dancing in the grassland in one ethnic dance and the wide range of emotions and high drama in another dance with supernatural monks.

“It was a learning experience,” he said. “You do not see that in a lot of dance companies. It’s the first time I’ve seen that.”

Also in the audience were Noemy and Justin Skelton, who said they learned much about the cultural traditions and beliefs through the dance.

Mrs. Skelton said “a lot of beautiful messages” came through in the dance.

“About just being a good person … good qualities … I think it had a lot of good messages,” she said.

Mr. Skelton, too, connected with the expressiveness of the dance.

“Even without any of them speaking, just from their actions and everything, you’re able to interpret what they were feeling, and what they were communicating with each other, and it brought us into the story without them having to speak at all,” Mr. Skelton said. “It was really, really awesome.”

Mrs. Skelton added, “It was perfect.”