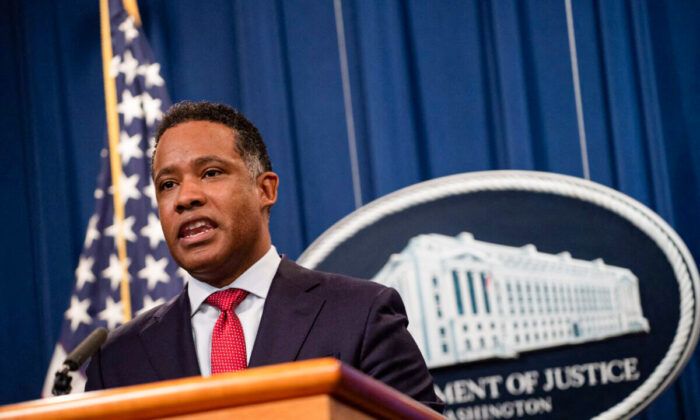 Department of Justice Criticizes Jan. 6 Committee for Not Turning Over Interview Transcripts

Top Department of Justice (DOJ) officials have chastised the House of Representatives committee investigating the U.S. Capitol breach that took place on Jan. 6, 2021, for not handing over transcripts of interviews they’ve conducted.

“It is now readily apparent that the interviews the Select Committee conducted are not just potentially relevant to our overall criminal investigations, but are likely relevant to specific prosecutions that have already commenced,” Assistant Attorney Generals Kenneth Polite Jr. and Matthew Olsen wrote to the panel in a letter dated June 15 that was docketed in a federal court on Thursday.

“The Select Committee’s failure to grant the Department access to these transcripts complicates the Department’s ability to investigate and prosecute those who engaged in criminal conduct in relation to the January 6 attack on the Capitol,” they added later, urging the panel to reverse its position.

Matthew Graves, the U.S. attorney for the District of Columbia, also signed the missive.

The office of Graves submitted the letter in a case against members of the Proud Boys who are charged with crimes in relation to Jan. 6.

Prosecutors said the DOJ “has neither access to the transcripts, nor the ability to compel Congress, a co-equal branch of government, to provide copies of the transcripts.” They also said they do not oppose pushing back the trial of the defendants due to the transcripts not being available.

“We got the letter yesterday, we are reviewing it, we will respond to it, but we are in the midst of conducting our hearings,” Rep. Bennie Thompson (D-Miss.), the chairman of the House panel on Thursday.

We have a program to get over, we have to get the facts and circumstances behind Jan. 6. We will work with them, but we have a report to do. We are not going to stop what we are doing to share the information that we have gotten so far with the Department of Justice. We have to do our work,” he added.

Thompson told reporters in May that he rebuffed a request from DOJ officials to turn over transcripts, describing them at the time as “the committee’s work product.”

The transcripts would be shared after the panel’s work is done, Thompson added.

Lawmakers on the panel cannot bring criminal charges, but they can make criminal referrals. Thompson said recently that the panel wouldn’t make any referrals; some members said that decision has not been made yet.

Attorney General Merrick Garland, head of the DOJ, told reporters this week that he is watching the hearings the panel is holding. “And I can assure you that the January 6 prosecutors are watching all of the hearings as well,” he said at an unrelated briefing in Washington.

Garland said the DOJ is working to “hold all perpetrators who are criminally responsible for Jan. 6 accountable, regardless of their level, their position, and regardless of whether they were present for the events of Jan. 6.”

The Jan. 6 House panel has interviewed over 1,000 people in its probe, including many who have not been charged with a crime. The list includes former President Donald Trump’s daughter and adviser, Ivanka Trump; former Trump lawyer Rudy Giuliani; and Bill Stepien, who managed Trump’s 2020 campaign.

The panel is holding hearings in June, with the third one of the month completed Thursday. Leaders have said they plan to issue a report by the end of the year.