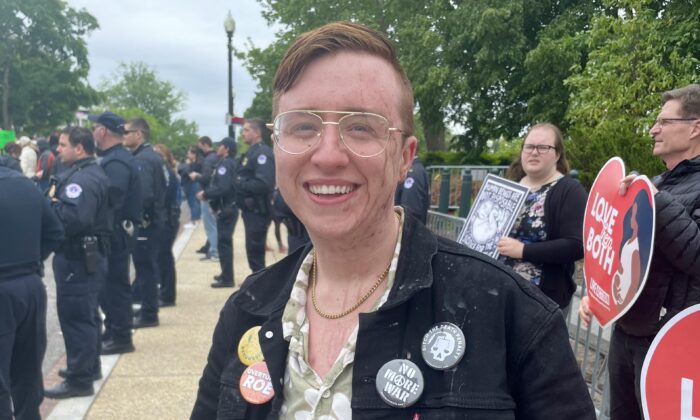 Herb Geraghty in a file image. (GiveSendGo)
By Zachary Stieber

The Department of Justice (DOJ) has charged another pro-life activist, in the latest case by the Biden administration against an individual for allegedly seeking to block access to an abortion clinic.

Herb Geraghty, of Pennsylvania, was charged with violating the Freedom of Access to Clinic Entrances (FACE) Act and conspiring to deprive civil rights, the same charges leveled against activists who gathered at clinics in Washington and Tennessee.

Geraghty was named in a superseding indictment (pdf) against a group that allegedly sought to block access to the Washington Surgi-Center, an abortion clinic in Washington, in October 2020.

Geraghty is accused of communicating with Lauren Handy, who was previously charged, to plan a blockade of the facility, according to the DOJ. Handy used money from a donation to pay for an Airbnb for herself and Geraghty, according to charging documents.

The group entered the clinic and blocked its entrance with their bodies and items such as chains. Jonathan Darnel, another defendant, allegedly livestreamed the blockade.

“We have people intervening physically with their bodies to prevent women from entering the clinic to murder their children,” Darnel said during the livestream.

All 10 defendants were charged with violating the FACE Act, which prohibits obstructing people from obtaining or providing abortions. They also were charged with civil rights conspiracy for allegedly conspiring to restrict people’s constitutional rights. Each faces up to 11 years in prison if convicted.

Geraghty took to social media on Oct. 17 to say the charges against himself and others are being motivated by politics.

“It is clear that the Biden administration intends to use the DOJ as a weapon against political dissidents,” he said.

Eleven people were charged in October for blocking access to a clinic in Tennessee in 2021. Some of the defendants in that case also said they feel as though they’re being unfairly targeted.

Geraghty thanked supporters but asked people to “never lose sight of the fact that no matter what the state does to me or the other defendants—it will never compare to what they allow abortionists to do to children.”

“The unborn babies still being killed every day in this country, despite the Dobbs decision, are the real victims,” he said. “These children do not even get a trial before they are put to death. As you pray and demand justice for us, do NOT stop working for justice for them.”

Supporters are raising funds for Geraghty on GiveSendGo.

The FACE Act has been on the books since 1994 but has rarely been used to prosecute pro-life activists, the Progressive Anti-Abortion Uprising noted in a statement released after Geraghty’s arrest. That group’s director of activism is among those who took part in the 2020 blockade.

“Yet in 2022 alone, under the Biden/Garland DOJ, there have been at least 22 peaceful pro-life activists indicted under the act,” the group stated. Attorney General Merrick Garland was appointed by President Joe Biden to lead the DOJ.

The uprising group is among those that see the civil rights conspiracy charges as contrary to the Supreme Court decision because striking down Roe means that access to abortion is no longer a constitutional right.

Garland, in prepared remarks delivered at the White House in July, acknowledged that the decision effectively “[eliminated] a … constitutional right.”

But he said that the DOJ “will continue to enforce the FACE Act and protect health care providers and individuals seeking reproductive health services in states where those services remain legal.”

“The Justice Department’s Reproductive Rights Task Force, led by Associate Attorney General Vanita Gupta, is vigilantly monitoring state laws and enforcement actions to ensure that states do not infringe upon these and other protections of reproductive rights,” Garland said. “And when we learn that states are infringing on federal protections, we will consider every tool at our disposal to affirm those protections.”