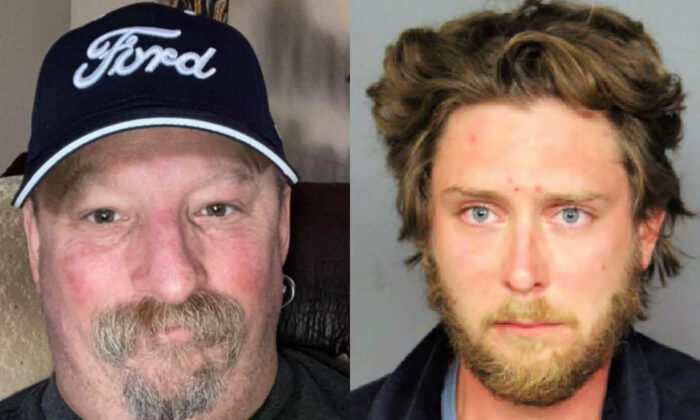 Family members named the man who was shot dead in Denver on Oct. 10 as authorities identified the shooter who was caught on camera firing his weapon.

The shooting came after a conservative demonstration was met by counter-protesters with Black Lives Matter and Antifa.

“My son Lee was at the patriot rally today in Denver. After the rally, a person on the BLM and Antifa side went up to him said a few nasty words then shot him in the head,” Carol Keltner, Lee Keltner’s mother, wrote on Facebook.

“He was murdered because he backed the police. His 24 year old son was with him. I moved to Arkansas because Colorado got too expensive and liberal. The left has gotten out of hand,” she added.

Carol Keltner didn’t respond to a request for an interview.

Suzan Keltner, Lee Keltner’s sister, confirmed to the New York Post that her brother was gunned down in full view of his son.

“He was my brother, my only sibling. He also served our country,” she said, adding, “There’s going to be a lawsuit. So, I don’t know how much we can let out.”

Keltner’s son, Johnathon, told the Denver Post that his father wasn’t part of a group.

A Facebook page under a pseudonym showing Lee Keltner included a picture of him wearing the same American flag bandana as a mask that the shooting victim was wearing in Denver.

The page includes pictures of Keltner appearing to wear the same shirt he had on during the rally on Saturday, of vehicles with “Trump 2020” flags, and a Revolutionary War-era figure holding a gun with the caption, “Never apologize for being a patriot.”

One of them, Jay Keltner, said in a post late Oct. 10, “I can’t believe my dad’s gone this will never be right #RIP.”

He later posted a photograph that showed the moment when the shot was fired.

A fundraiser for Keltner was started on GoFundMe.

“This patriot was killed in a pro police rally,” according to the person who created it.

They identified the shooting suspect as Dolloff, a private security guard hired by NBC affiliate 9News. Police described the probe into the incident as a homicide investigation.

“This remains an active investigation; any additional updates will be released as it becomes available,” police said in an update on Oct. 11.

“Lee u always had a great sense of humor & always helped those you could. U were one of the good guys! This world is a sadder place without u my friend!” she wrote on Twitter, sharing two pictures of Keltner.

Keltner was a custom hatter.

“We’re keeping the West alive one hat at a time,” he said in an interview with the American Angus Association in 2012. He described himself as an artist.

“When you work behind the hat counter, it’s pretty much because of addiction. It gets in your blood and you get a passion for it. It’s an art, like painting, and I just kept doing it. I’m lucky that I’ve been able to make a living out of it for 21 years now,” he told the Denver Post in 2015.

Police said the district attorney will make the decision as to whether the shooting was in self-defense.

John Tiegen, who organized the conservative rally, said in a social media statement that he wasn’t sure if the victim had been at the rally or just in the vicinity.

Tiegen referred to Keltner as “a man who was there showing support for America and its foundational principles.”