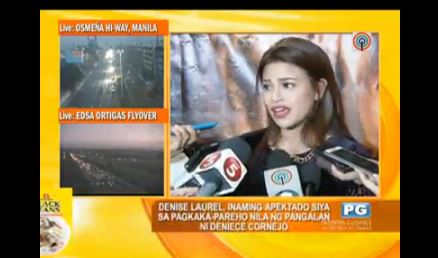 Denise Laurel Traumatized After People Mistake Her for Deniece Cornejo

Denise Laurel says she was upset after she was recently mistaken for Deniece Cornejo.

For some reason, people on the Internet believe Laurel is Cornejo, and have been sending her hateful tweets.

Cornejo is the model who has accused Vhong Navarro of trying to rape her, although the evidence in the case appears to support Navarro’s story that he was beaten and blackmailed.

“I have a slight trauma, because people are tweeting at me, cursing at me, saying things like ‘you should die,’ and ‘you turned out to be the culprit,'” Laurel told ABS-CBN.

She emphasized that she is not Cornejo and that they have very different personalities and names.

Asked if she is planning to change her name, Laurel said: “”I’d like to think that after 17 years of being in the industry, I created my own way of Denise and hopefully hindi siya masira ng isang Deniece na hindi kanais-nais ang nangyari.”