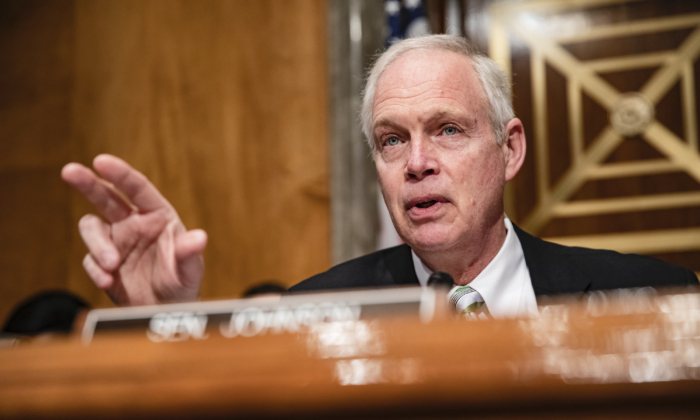 Sen. Ron Johnson (R-Wis.) speaks at the start of a Senate Homeland Security Committee hearing on the governments response to the CCP virus outbreak in Washington on March 5, 2020. (Samuel Corum/Getty Images)
By Matthew Vadum

Democratic Party activists in Wisconsin have filed a suit in federal court arguing that a pro-Trump senator and two pro-Trump congressmen should be barred from office for speaking out on 2020 election irregularities and allegedly attempting to manipulate the congressional certification of the presidential election results.

The suit claims the lawmakers cannot serve in Congress because the disqualification clause in Section 3 of the 14th Amendment forbids it. That rarely invoked constitutional provision was enacted in the wake of the Civil War to keep former Confederates out of Congress.

Johnson dismissed the lawsuit, telling The Epoch Times it is “total nonsense.”

“Democrats have ignored the Summer 2020 riots and relentlessly used January 6th [2021] as a political cudgel,” Johnson said in an emailed statement. “Now, they’ve used January 6th to file a frivolous lawsuit against me, similar to the one dismissed by a court last week.”

The lawsuit claims the lawmakers “used their public positions of authority to illegally foment an atmosphere meant to intimidate and pressure Vice President [Mike] Pence and Congress to take actions inconsistent with the facts and with their duties under the Electoral Count Act and the U.S. Constitution.”

The lawmakers used “their powers as public officials and their respective bully pulpits to undermine public trust in the outcome of the election and to enable a criminal scheme to institute fraudulent electors (in Wisconsin and elsewhere) to manufacture a constitutional crisis on January 6, 2021, over how to count the electoral ballots.”

The legal action claims the lawmakers illegally pressured Pence, in his role as presiding officer at the joint session of Congress certifying the 2020 electoral votes on Jan. 6, 2021, to “unilaterally reject the legitimate electoral votes of Wisconsin and six other states for the Biden–Harris ticket.”

On Jan. 6, 2021, there was a security breach at the U.S. Capitol in which supporters of then-President Donald Trump delayed the congressional certification of the 2020 presidential election results for several hours. Democrats and some Republicans characterize the disturbance, from which some elected officials took cover, as an insurrection or coup attempt aimed at overthrowing the U.S. government, a claim that has been adamantly denied by Trump and his supporters.

Democrats have attempted to use the disqualification clause to take two other sitting federal lawmakers off the 2022 ballot for their pro-Trump activities. While the challenges to Rep. Jim Banks (R-Ind.) and Rep. Madison Cawthorn (R-N.C.) have both failed, a ruling in the Cawthorn case is under appeal.

The 80-page legal complaint (pdf) in the case at hand, Stencil v. Johnson, court file 2:22-cv-305, was filed March 10 in the U.S. District Court for the Eastern District of Wisconsin. Nancy A. Stencil is one of 10 plaintiffs, all of whom are registered Wisconsin voters.

According to the complaint, the lawmakers “engaged in overt acts in furtherance of a conspiracy meant to foment public distrust in the outcome of the 2020 election, undermine the rule of law, and assist an insurrection against the United States with the illegal goal of reversing the results of the election that made Joseph R. Biden the 46th President of the United States.”

The three lawmakers’ “falsehoods … about the integrity of Wisconsin’s election procedures began even before citizens were allowed to cast their ballots in the 2020 Presidential Election and continued long after their lies were disproven.” The lawmakers “repeatedly proclaimed lies about the election and its results, and those lies increased in frequency and intensity as January 6, 2021, approached.”

Fitzgerald also is accused in the complaint of supporting an alternate slate of Trump electors. He allegedly procured a room for “ten fraudulent electors from Wisconsin [who] met at the State Capitol on December 14, 2020, the date designated by law” for electoral votes to be cast, the complaint states.

One of the plaintiffs’ lawyers told The Epoch Times the lawsuit isn’t frivolous.

“Lawsuits are made up of facts and legal claims,” attorney Joseph S. Goode said by email.

“The judge overseeing this case gets to decide how the law applies to the facts as our adversarial system provides. Every fact in our pleading is based on matters of public record. We look forward to litigating the case to fruition.”

The legal challenge is being underwritten by the Minocqua Brewing Company Super PAC. In a March 13 statement on the left-wing political action committee’s website, founder Kirk Bangstad estimates the lawsuit “could cost $300,000 to fight over the next six months.”

Bangstad is also the owner of the Minocqua Brewing Co., makers of “progressive beers” such as Biden Beer, Bernie Brew, AOC IPA, and Filibuster Ale.

“This lawsuit is BY FAR the biggest thing we’ve ever done, but it’s also the most important and 100% central to our mission of getting rid of Wisconsin’s traitors,” he wrote.