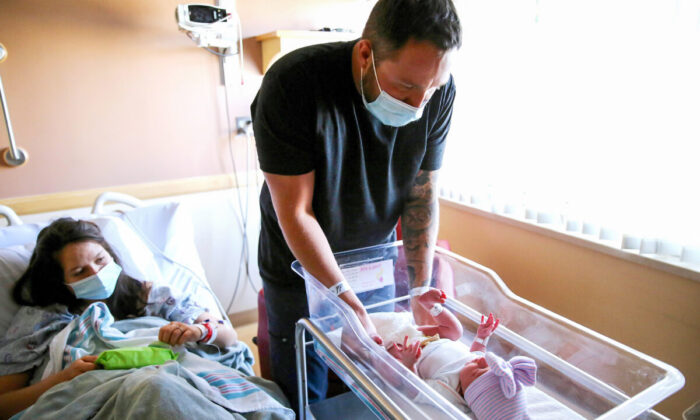 A father prepares to change the diaper of his newborn daughter as his wife looks on in a hospital in Apple Valley, California, on March 30, 2021. (Mario Tama/Getty Images)
By Kevin Stocklin

Amid the deluge of dire predictions that the human population will rise exponentially, deplete the earth’s resources, and overheat the planet, two recent demographic studies predict the opposite—that the number of people will peak within the next several decades and then begin a phase of steady, irreversible decline.

In some places, including Japan, Russia, South Korea, and most countries in Europe, that population collapse has already begun. China isn’t far behind.

The United Nations has predicted that humanity will continue its rapid expansion into the next century, growing to more than 11 billion by 2100 from just under 8 billion today. An oft-repeated interpretation of this data is that people are having too many babies, and many of the models for climate change and environmental degradation are based on projections like these. In August 2021, the U.N. declared a “code red for humanity” over climate change and overpopulation, and analysts at investment bank Morgan Stanley stated that the “movement to not have children owing to fears over climate change is growing.”

However, a demographic study funded by the Gates Foundation and published in the Lancet, a medical journal, paints a much different picture. This study, conducted by researchers at the University of Washington, predicts that the global human population will peak at 9.7 billion within several decades, and then start to decline.

“Once global population decline begins,” the authors write, “it will probably continue inexorably.”

The Lancet study projects that by the end of this century, China will have shrunk by 668 million people, losing almost half of its current population, and India will lose 290 million. Despite all efforts to reverse this trend in China, including eliminating the one-child policy and providing incentives for child-rearing, couples aren’t cooperating; China experienced its fifth consecutive record-low birth rate in 2021.

Findings like these are the basis for Tesla/SpaceX CEO Elon Musk’s statement in May that “civilization is going to crumble” from the loss of so many people. Musk had previously declared at an event in 2019 that “the biggest problem the world will face in 20 years is population collapse.” Jack Ma, co-founder of Alibaba Group, also present at the event, agreed.

“The future is going to look very, very different from the past,” he said. Some of the things we are experiencing today, such as high inflation, labor shortages, and the sacrifice of economic well-being to protect the elderly and the vulnerable, offer a “peek into the future.”

The most populous countries in the world today are China and India, both with about 1.4 billion people, together comprising one-third of the world’s population. The United States is a distant third, with 330 million. Indonesia, Pakistan, Brazil, Nigeria, Bangladesh, Russia, and Japan round out the top 10.

According to the Lancet and other studies, populations will soon start to fall throughout Asia and South America, catching up with chronic declines that are already taking place in Europe. Simultaneously, Africa will be one of the few areas that continue to grow their population, though even in Africa growth rates are falling. Nigeria is projected to gain 585 million people by the end of this century, becoming the world’s second-most populated country after India, with China falling to third and the United States falling to fourth. Japan, Russia, and Brazil will soon drop out of the top 10 altogether.

The key discrepancy between those who project rapid expansion and those who predict decline centers on fertility rates. Dr. Darrell Bricker and John Ibbitson, co-authors of “Empty Planet: The Shock of Global Population Decline,” combed through global fertility data and traveled across six continents speaking with people throughout Asia, Africa, South America, and the West. What they discovered concurs with the Lancet Study; both statistically and anecdotally, birth rates around the world are significantly below what the U.N. has projected.

Driving the population collapse is what Bricker and Ibbitson call the “fertility trap.” For a country to sustain its population, women must have an average birth rate of 2.1 children. Once a country’s fertility rate falls below 2.1, it never comes back.

Russia’s fertility rate is 1.6. Deaths substantially outnumber births in Russia today, and it is projected to lose up to one-third of its population by 2050. A January Foreign Policy report stated that Russia’s loss of population means it will soon struggle to field enough soldiers for a major military conflict, likely a factor behind its recent threats to use nuclear weapons.

In 1960, the average woman worldwide had 5.2 children. Today that number has fallen to 2.4 and is projected to decline to 2.2 by 2050, barely at replacement level across the globe. By 2100, the Lancet predicts global fertility will be 1.66, taking into account current trends of urbanization, women’s education, workforce participation, and access to birth control.

Going from a birth rate of 5 to a birth rate below 2, writes Stanford University Economist Charles I. Jones, is the difference between “exponential growth in both population and living standards and an empty planet, in which incomes stagnate and the population vanishes.” Jones’ March 2022 report, titled “Consequences of a Declining Population,” describes what he calls the “empty planet result,” featuring not only a decline in human prosperity, but also a depletion of culture, ideas, and innovation.

“Economic growth stagnates as the stock of knowledge and living standards settle down to constant values,” Jones writes. “Meanwhile, the population itself falls at a constant rate, gradually emptying the planet of people.”

For countries below the replacement rate, immigration can help sustain their population for a time, but there are few countries that allow significant immigration and even fewer that are managing it effectively. The global drop in fertility, however, means that even countries such as the United States and Canada, which have been growing their populations through immigration, may soon hit their peaks as well.

While a future with fewer people may have environmental benefits, one demographic problem is that, as humanity shrinks, the composition of societies changes dramatically. Longevity is a key factor slowing the population collapse—the average human lifespan has increased from 51 years in 1960 to 73 years today. The Lancet predicts that by century’s end, there will be 2.4 billion people older than 65, compared with only 1.7 billion under the age of 20. The median age worldwide has gone up to 30 years today from 22 in 1960, and is projected to increase to 41 by 2100.

A large portion of the earth’s population will be older, beyond childbearing age, and more dependent on an ever-shrinking pool of productive young people to care for them in retirement. This inverse pyramid of the few supporting the many is most likely unsustainable. One phrase that is commonly used by researchers regarding countries such as China is that they are “getting old before they are rich enough to get old.”

Demographers say there are several causes of declining fertility rates, but they point to one factor that seems to be driving the rest: urbanization. When people move from the countryside to cities, the economics of having children shifts.

In purely monetary terms, children are no longer a source of labor for farms, etc., but rather an expense. In the United States, the average cost of raising a child to adulthood, not including college expenses, is $267,000. Another consequence of urbanization is that women become educated, employed, independent, and have better access to contraception. Regardless of which country they’re in, women react the same way, by having fewer children and having them later in life.

According to the “Empty Planet” authors, fewer than a third of the world’s people lived in cities in 1960. Today, just over half of the world’s population are urban dwellers; by 2050, that number is expected to increase to more than two-thirds.

Africa is projected to increase from 44 percent urbanized today to 59 percent by 2050, Asia from 52 percent to 66 percent. The rest of the world’s population is already more than 80 percent urbanized. The U.N. study predicts that China will go from having been 16 percent urban in 1960 to 80 percent urban by 2050. And China’s demographic problems are exacerbated by the fact that its one-child policy, although officially ended in 2016, has created a shortage of women today. Currently, China has 34 million more males than females, leaving a large portion of its male population now reaching adulthood without the prospect of having a family.

Is Japan Our Future?

Some say that if you want to see your future, look at Japan today. Japan is 92 percent urbanized and its population is shrinking by about half a million people every year. It’s a fairly homogenous society with little immigration, and its marriage and birth rates have declined steadily, leaving it a “super-aged” nation with 20 percent of its population now older than 65. As Japan ages and empties, its economy has stalled and asset values have fallen.

Japan’s Nikkei stock market index crashed during the 1990s from a high of 39,000 to 20,000, marking the “start of a long adaption from a young, fast-growing economy to an aging, slow-growth new normal,” economist Martin Schultz explained. Japanese stocks never fully recovered; three decades later, the Nikkei index is currently at 27,000.

After rising dramatically for decades, Japan’s per capita GDP flatlined in 1995 and hasn’t grown significantly since. With an aging and declining population, sales of adult diapers in Japan now exceed that of infant diapers, and some of the emptier places in Japan have even taken to posing life-sized dolls in public places to make these locations feel less deserted.

Asked if Japan was our future, Pradhan said, “Sadly, no, because that would’ve been quite comforting. Japan had its demography turning negative while the rest of the world was swimming in labor.”

Japanese companies were able to prosper through the decline by shifting labor to places with abundant populations, while workers at home developed automation to increase their productivity. Consequently, Japan so far has avoided the inflation and debt levels that shrinking and aging populations will bring.

As countries produce less and dedicate more and more resources to caring for the elderly, Pradhan said, “We’re going to see an increase in debt-to-GDP ratios to the extent that no one has ever imagined.” This will lead to lower growth and chronic inflation. Stagflation could become a permanent feature.

On the positive side, labor shortages will likely lead to higher wages and greater equality among working-age people. And there will be great demand for technologies to replace the more rudimentary tasks and free up human labor.

Pradhan cited the example of the Japanese government providing subsidies for nursing homes to buy robots to carry out the simpler aspects of elder care.

“Japan’s productivity is one source of hope for all of us.” It’s also possible that medical breakthroughs could improve the health of the elderly and extend peoples’ productive years, allowing retirement to be pushed later in life.

Another thing that will be in high demand is empathy in taking care of others, which families traditionally had done for parents and grandparents, Pradhan said.

“I think that’s something that in a mechanized society, we’ve lost.”