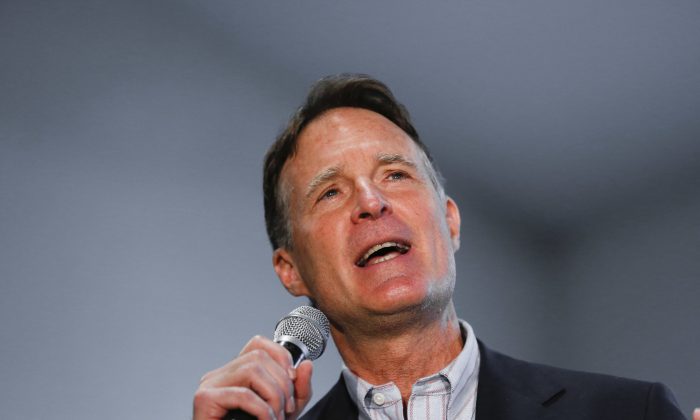 In this photo taken May 1, 2016, former Indiana Sen. Evan Bayh speaks in Indianapolis. Bayh is expected to make another run for Senate in Indiana, Democratic officials said Monday, July 11, 2016, a development that would dramatically improve the party's chances to win back the vacant seat, and Senate control along with it. (AP Photo/Paul Sancya)
US

WASHINGTON—Following a recruiting success in Indiana, Democrats are eyeing Kansas as they try to expand their playing field into red states and take back the Senate this fall.

GOP Sen. Jerry Moran is up for re-election in Kansas, Republican-friendly territory that’s on few lists of competitive races this year. Thus far his opponents are little-known, but Democrats are watching a Kansas businessman, Greg Orman, who ran for Senate two years ago as an independent, to see if he might make another try this year, according to one Democratic official with knowledge of the deliberations.

Orman challenged longtime GOP Sen. Pat Roberts in 2014 and ran a more competitive race than expected, although Roberts ultimately won. Orman could get on the ballot as an independent again this year by filing petition signatures by Aug. 1.

Orman did not return phone and email messages seeking comment. The Democrat who discussed Orman’s potential candidacy did so on condition of anonymity ahead of an official decision.

The focus on Kansas follows developments Monday in Indiana, where Democrats were applauding news that former Sen. Evan Bayh is looking to make a comeback.

The developments in both states stand as the latest examples of Democratic attempts to mount competitive races on Republican-friendly terrain, as they try to capitalize on turmoil around Donald Trump’s presidential candidacy.

“It’s going to be good for the country, good for Indiana to have him back,” Senate Democratic Leader Harry Reid said Monday of Bayh, adding that Trump “speaks for the Republicans” and creates opportunities for Democrats to compete around the country.

In addition to top-tier races in politically divided or Democratic-friendly states including Illinois, Wisconsin, New Hampshire and Pennsylvania, Democrats have been promoting a second and third tier of Senate candidates in GOP-leaning states including Arkansas, Missouri, North Carolina and Iowa. None is favored to win, but all give Republicans something they need to pay attention to in a year when Democrats are on offense nationwide.

Democrats need to net four or five seats to win back Senate control — four if they hang onto the White House and can send the vice president to break ties in the Senate; five if they don’t. With a handful of competitive races around the country, one seat can make all the difference.

In the game of chess that Democrats and Republicans play, even if Democrats’ favored candidates don’t end up winning in places like Indiana or Kansas, forcing Republicans to spend money in states they’d considered safe is its own victory.

“We’re seeing that more are tipping into play, maybe not winners, but in play,” said Michael Meehan, a longtime Democratic consultant, pointing to North Carolina, where GOP Sen. Richard Burr is defending his seat, and Arizona, where Sen. John McCain is up for re-election. Both are states where Hispanic voters angered by Trump’s rhetoric on immigration could create problems for GOP incumbents.

But Republican campaign officials disputed the notion the Democrats would be able to compete successfully in red states. They noted they scored their own coup last month, when they convinced Florida Sen. Marco Rubio, a former presidential candidate, to abandon his retirement plans and announce he would seek re-election. And they argued that Hillary Clinton’s unpopularity would harm Democratic candidates more than Trump would hurt Republicans.

“I don’t think that they’re successfully expanding the map because they have so many other races that have really turned south on them. Look at what happened in Florida,” said Greg Blair, spokesman for the National Republican Senatorial Committee. “Hillary Clinton is a historically toxic candidate on their side.”