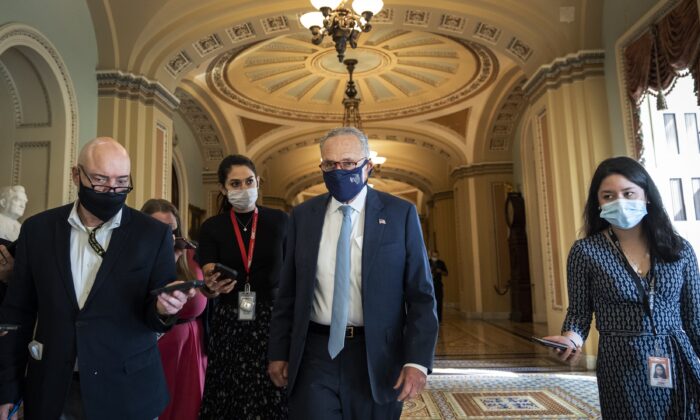 Senate Democrats plan to reveal a revenue scheme for their multi-trillion-dollar budget bill that would tax unrealized capital gains, a move targeted towards the richest of the ultra-wealthy.

The measure would put taxes on unrealized capital gains, but would start at an extremely high threshold. To meet the threshold, an individual would need to make $1 billion or more in income in one year, or $100 million or more for three consecutive years. Only around 700 Americans would be subject to this new tax.

The goal behind the move is to target the wealthiest Americans, whose wealth is primarily in stocks. If a stock owner does not sell their shares of a stock, any profit made is “unrealized” and is exempt from taxation until the stocks are sold. This would change that, allowing unrealized capital gains to count as income, thus making them subject to taxation.

Treasury Secretary Janet Yellen, who has been supportive of other Democratic revenue schemes, defended the new proposal.

“I wouldn’t call that a wealth tax, but it would help get at capital gains, which are an extraordinarily large part of the incomes of the wealthiest individuals and right now escape taxation until they’re realized,” Yellen said.

This is only the most recent among a slew of proposals by Democrats to finance their landmark budget bill, which they have promised will be entirely paid for.

Another plan would have allowed the IRS to gain information on the inflows and outflows of any American bank account with more than $600 per year. Sharp backlash from Republicans and private sector businesses forced Democrats to change course on this proposal, raising the threshold to $10,000 per year.

But it is not certain that this new proposal will pass muster with some of the upper chamber’s most important moderate swing votes.

Sen. Joe Manchin (D-W.Va.) has said in the past that he is open to raising income and corporate tax rates, which were slashed in 2017 by the Republican Tax Cuts and Jobs Act.

On the other hand, this new proposal may be more than Manchin, who has cited fears about government overreach on the economy, can stomach.

Much more pressingly, Sen. Kyrsten Sinema (D-Ariz.) must approve of the new scheme.

After months of no comment, Sinema’s office confirmed these reports Friday.

John LaBombard, a spokesman for Sinema, said that the senator “is committed to ensuring everyday families can get ahead and that we continue creating jobs.”

McConnell then turned to Democrats’ new proposal, saying, “Democrats are so desperate to raise taxes that they’re now proposing to tax money the American people haven’t even made yet.”

Despite weeks of negotiations, Democrats remain undecided on the final form that their reconciliation bill will take. But without a green light from moderates on this newest proposal, Democrats will once again be forced back to the drawing board if they hope to meet their promise to craft a fully paid-for bill.

Correction: A description of when unrealized gains are exempt from taxation has been clarified. The Epoch Times regrets the error.