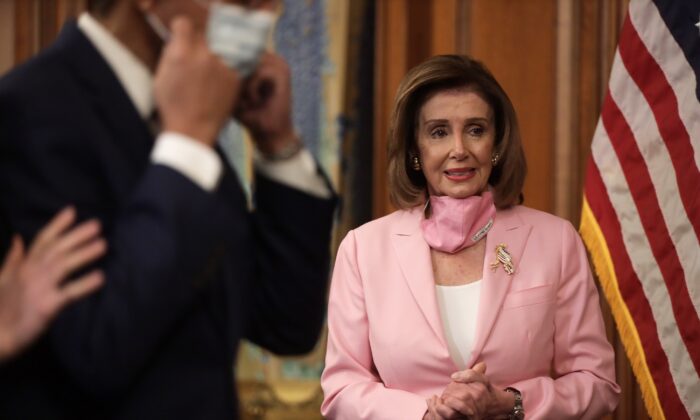 House Democrats on May 12 released a $3 trillion bill that includes another direct payment to each American as well as nearly $1 trillion for state and local governments that would help those struggling with unbalanced budgets amid the COVID-19 pandemic.

The bill (pdf) would provide $540 billion to states, territories, and tribal governments “to mitigate the fiscal effects stemming from the public health emergency with respect to” the pandemic.

Another $375 billion would go to cities, counties, and other local governments for the same.

The package includes $25 billion for the U.S. Postal Service, a $45 billion infusion for the small business loan program that’s been tapped by companies across the nation, and $100 billion for emergency rental assistance. And $90 billion is designated for the Department of Education to disperse through a state fiscal stabilization fund, while $75 billion is designated for homeowner assistance.

Billions would go to a slew of agencies and programs, including top health agencies for producing vaccines, therapeutics, and other measures; to states for preparing for elections; and for an Emergency Broadband Connectivity Fund.

Democrats plan to convene on May 15 for a vote following a prolonged break after representatives went to their homes from Washington last month.

“This bill is a partisan wish list full of outrageously unrelated items. As a country we must stay focused on reopening safely, enabling American society to rise up again and drive the economic recovery,” Romina Boccia, a budget scholar at the Heritage Foundation, said in a statement.

Democratic leaders in Congress have pushed a fifth bill for weeks, saying state and local governments require funds, and other programs could use more money, including the food stamp program.

But Republican leaders and White House officials have said they want to take things slow, saying they don’t see an immediate need for funds.

McConnell said lawmakers were assessing the effectiveness of what was passed in the previous packages.

McConnell said earlier that he and Sen. John Cornyn (R-Texas) are spearheading their own package, which will focus on liability reforms that protect businesses from COVID-related lawsuits.