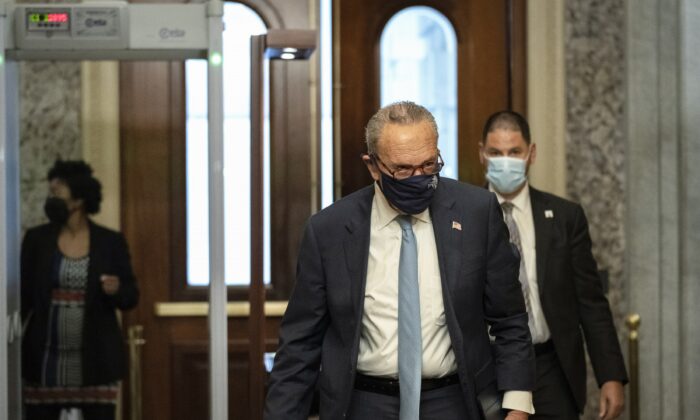 Senate Democrats are trying to push Sen. Joe Manchin (D-W.Va.) into voting to weaken the filibuster so that Democrats can pass voting rights legislation, after the senator from West Virginia on Jan. 4 rejected a strategy that would allow his party to work around Republican opposition to the measure.

In a statement on his Twitter account on Jan. 3, Senate Majority Leader Chuck Schumer (D-N.Y.) attempted to tie GOP opposition to federal election bills to “domestic extremists” who, Schumer contended, tried to “destroy our Republic” in the Jan. 6, 2021, Capitol breach.

“Domestic violent extremists sought to inflict chaos and violence. Fueled by conspiracy and the ravings of a vengeful former President, they sought to destroy our Republic,” Schumer told his Senate Democratic colleagues in a Dear Colleague letter.

Hoping to nullify the opposition of all 50 Republican senators to the legislation, Schumer proposed that Democrats use the “nuclear option,” which in U.S. legislative parlance describes a pathway to change Senate rules with a simple majority vote, in order to advance legislation.

With the support of its entire Senate caucus, Democrats would have a straight shot to override practically every Senate standing rule and turn the Senate into a smaller version of the House of Representatives.

If they were to achieve this, Democrats have made clear that they would use the new rules to pass wide-ranging legislation that would effectively neuter states’ controls over elections, giving that power instead to the federal government.

But Manchin said on Jan. 4 that he’s not on board with changing the filibuster along party lines, denying Democrats his much-needed vote.

“I’ve always been for rules being done the way we’ve always done,” Manchin said when asked about Schumer’s proposal. “Being open to a rules change that would create a nuclear option, it’s very, very difficult.”

“Any time there’s a carveout, you eat the whole turkey,” Manchin said, referencing potential dangers that could come from liberally using the nuclear option. “The Senate, as it has operated for 232 years, [has an] extremely, extremely high bar that we must be very careful [of crossing].”

Now, Democrats again find themselves in the position of begging Manchin to reconsider.

“Manchin has said all along that he wants to deal with Republicans and we have all been very patient,” Schumer told reporters after Manchin’s comments. “I believe he knows that we will not get any Republican cooperation.”

Schumer claimed that he and Manchin have had “serious discussions” over a rules change. However, from August until December, Manchin engaged in similar talks over the now-shelved Build Back Better budget bill; ultimately, Manchin wouldn’t be swayed to support the measure.

Manchin has been even more outspoken against weakening the filibuster than he was against the budget bill.

After Democrats won control in the Senate during the 2020 election, some of the party’s more progressive elements mused that Democrats could weaken or abolish the filibuster, pack the courts, and other similar efforts to shift the balance of power more in their favor.

Manchin was as concerned about this as were conservative critics, and before the 117th Congress was seated, he spoke on Fox News.

During that appearance, Manchin described himself as a “conservative Democrat” and vowed that he wouldn’t support any of the major rules overhauls being proposed by his party. Manchin emphasized that this was especially the case with the filibuster, which he said he would fight to strengthen rather than to weaken.

In the wake of this resistance, Democrats are now trying to force Manchin hands by scheduling a floor vote on the filibuster carveout even without Manchin’s support, forcing Democrats to show where they stand on the measure; that vote currently is expected to take place on Jan. 17.

However, Manchin isn’t the only Democrat who is hesitant to change one of the most basic rules of the U.S. Senate. Moderate Sen. Kyrsten Sinema (D-Ariz.) has also expressed concern over gutting the filibuster. Defending this position during one TV appearance, Sinema described the filibuster as a “tool … for the protection of the minority,” noting that Democrats had used the filibuster against GOP proposals on several occasions.

Another potential “no” vote is Sen. Dianne Feinstein (D-Calif.).

Over the summer of 2021, when Democrats were making similar proposals, Feinstein contended that the need for election reform wasn’t pressing enough to merit weakening the filibuster. She indicated that she could be convinced otherwise, but made clear that she was skeptical about the utility of such a move.

Speaking about Manchin and Sinema, Sen. Dick Durbin (D-Ill.) said: “You’ll never know until you have the vote, frankly, and I hope that they will be on board. We’ve spent month after month after month with both of them. … We’re trying to convince both of them, give us a fair chance to deal with voting rights.”

A long list of other Democrats, including Sens. Jon Ossoff (D-Ga.), Mark Kelly (D-Ariz.), and Mark Warner (D-Va.), among others, also in the past have been lukewarm at best toward changing or abolishing the filibuster.

Because Democrats need all 50 members of their caucus on board with a rule change, any one of these critics could singlehandedly kill the measure.

Even with the pressure that a floor vote could put on some senators from progressive-leaning states, it’s unlikely that Democrats can overcome the 51-vote threshold to pass any such changes.