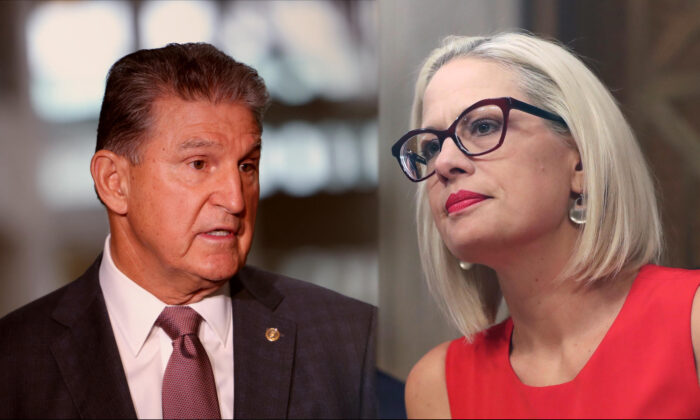 President Joe Biden and other Democrats have suggested that the party could break the $1.85 trillion Build Back Better (BBB) social spending package into smaller, more targeted bills in order to pass some parts of the scheme after its defeat in late December.

Biden and other Democratic leaders spent the latter half of 2021 pushing for the passage of the BBB. Biden focused especially on moderate Sens. Joe Manchin (D-W. Va.) and Kyrsten Sinema (D-Ariz.), who remained opposed to the omnibus bill to the end.

Over its short life, the BBB saw price cut after price cut before its final failure.

In the original proposal by Senate Budget Chairman Bernie Sanders (I-Vt.) the budget had a top line price of $6 trillion. This proposal was too much even for less moderate Senate Democrats; Sanders was forced to revise the bill, which would have been $2 trillion more expensive than the entirety of the United States’ spending on WWII and its aftermath, down to $3.5 trillion, a figure that moderates found slightly easier to stomach.

Amid the rampant inflation and unprecedented government expenditures in the months leading up to the bill’s creation, Sinema and Manchin said that the $3.5 trillion price tag was too expensive, and the duo refused to give the scheme their blessing.

Finally, the bill was sliced down to $1.85 trillion, a tough blow for progressives who already considered $3.5 trillion a substantial compromise.

Still, Manchin stood resolutely against the further-gutted bill, and effectively killed any hope that it could still pass when he said he was still unwilling to vote for the package, saying that White House staff had done “inexcusable things” with the bill.

Following this blow, Biden and his party turned their attention to another priority: the passage of wide-reaching election legislation.

Because any Democrat-sponsored election bill had no chance of making it through the Senate under normal rules, Biden and Senate Majority Leader Chuck Schumer (D-N.Y.) threw their support behind a scheme to neuter the filibuster to bypass GOP objections to the election legislation, which Republican critics said would unfairly benefit Democrats over Republicans.

This scheme too failed, again at the hands of Manchin and Sinema, who on Wednesday voted with Republicans against a filibuster carve-out.

In the wake of this defeat, Democrats are considering again returning to the BBB. But rather than pass the social package as an omnibus bill, the latest plan to pass the partisan legislation would involve breaking the bill into smaller chunks.

During a Wednesday press conference at the White House, Biden raised the idea with reporters.

“It’s clear to me that we’re going to have to probably break it up,” Biden said. “I think that we can get—I’ve been talking to a number of my colleagues on the Hill—I think it’s clear that we would be able to get the $500-plus billion for energy and the environment issues that are there.”

Sen. Ron Wyden (D-Ore.) also discussed the proposal with reporters on Thursday, expanding on what these standalone bills could look like.

After the original negotiations between Manchin, Sinema, and the White House, Wyden reported that he told colleagues, “I thought it made a lot of sense to go forward with a handful of priorities.”

Wyden mused that these smaller bills could satisfy Manchin who, Wyden said, is “rightfully concerned” about holding down inflation and rising costs. Smaller bills, Wyden suggested, could mesh with these concerns and win Manchin’s support.

“The President himself has said that he thinks [the CTC is] one of the most important domestic policy achievements of his administration,” Bennet said, adding that the CTC is “wildly popular in the Congress, wildly popular among the leadership of the Senate and the house.”

“We’re not giving up,” Bennet vowed, saying that he and others would “fight tooth and nail” to restart the program.

Rather than acting like a moderate, which he presented himself as being during the 2020 election, McConnell said that over the past year Biden has “adopted the Bernie Sanders prescription for America.”

But, McConnell argued, Biden “got no mandate” for this wide-reaching progressive agenda, as his party only took the Senate by the thinnest-possible majority and fared only a bit better in the House, where Democrats hold only a handful of seats more than Republicans.

McConnell said that if Biden were to “re-invent himself and come back to the middle,” Republicans would be willing to work with him. But on BBB, McConnell made clear, Republicans remain as opposed as ever.

It remains to be seen whether these proposed standalone bills can win the support of Manchin and Sinema.

Originally, the BBB included around $550 billion in climate spending, but in the past Manchin has opposed several of his party’s climate proposals—including proposed electric vehicle tax credits, government-financed incentives to switch to “clean energy,” and others that could hurt his coal-reliant constituents in West Virginia.

Because of their thin majority in the Senate, Democrats will need to be unanimously behind any proposal that comes to the Senate floor, meaning that Manchin and Sinema’s votes will be crucial to any of Democrats’ policy goals.