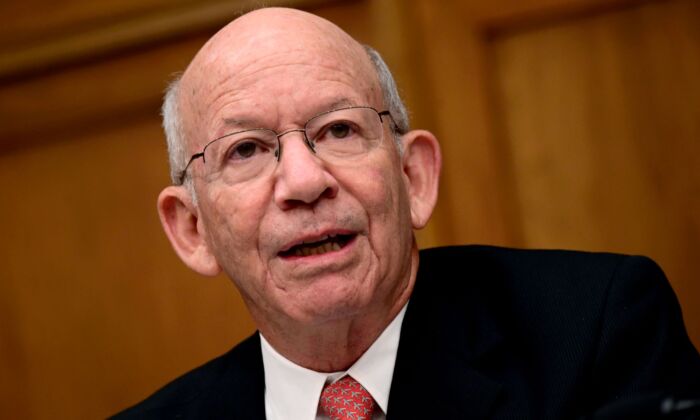 Congressman Peter DeFazio (D-Ore.) announced on Dec. 1 that he will retire and not seek re-election in 2022.

Chair of the powerful House Transportation and Infrastructure Committee—a position that allowed him to help shape the $1.2 trillion infrastructure package that passed in November–DeFazio served 36 years in the House of Representatives and was Oregon’s longest-serving House member.

Elected in 1974, DeFazio is known as a progressive populist who played a key role in drafting the bipartisan infrastructure bill and says he will continue to work on President Biden’s Build Back Better agenda during the remainder of his term.

“It’s been a great run, but it’s time to pass the torch,” DeFazio said during a press conference from his office in Washington, D.C., citing health concerns and a desire to spend time with family.

“Meanwhile, I’ve got more to do, including work on the Biden agenda, greenhouse gas reduction, equity, high-speed rail, and transit.”

Del. Eleanor Holmes Norton, a Democrat from the District of Columbia, has already announced her candidacy to succeed DeFazio in his chairmanship.

DeFazio’s decision to step down sets up a rare opening in Oregon’s congressional delegation.

Already, Alek Skarlatos, a Republican who narrowly lost his bid for DeFazio’s seat in Oregon’s 4th Congressional District in 2020, is seizing on the opportunity.

“President Joe Biden and his liberal policies have resulted in higher gas prices, record-high inflation, and an open border that has made our country unsafe, so it’s no surprise that Peter DeFazio has retired,” Skarlatos told The Epoch Times.

“It’s time for a new generation to lead Oregon, and not only will I hold Joe Biden accountable, but I will also offer fresh ideas to secure our border and fix this inflation crisis that is hurting middle-class families in Oregon.”

“We’re confident we will win this time,” he said. “We are now one of the four most competitive congressional races in the nation.”

“With an open seat and an extremely unpopular president, that may be true,” Jake Pelroy, an Oregon political consultant told The Epoch Times.

“But after redistricting, the district went from a ‘toss-up’ to ‘likely Democrat’ with a six-point advantage.”

Analysts expect a crowded field in the Democrat primary for the 4th District, as well.

Shortly after DeFazio’s announcement, Oregon Labor Commissioner Val Hoyle, who lives in the district, announced her intention to run for the seat.

“I have always been focused on getting the job done, not on who gets the credit,” Hoyle said in a statement.

“Nobody can fill Peter DeFazio’s shoes. But I am determined to do all I can to ensure that his dedication to our people and communities, his strong and principled leadership, and his track record of putting the needs of hard-working Oregonians first, will continue.”

On Dec. 1, state senator Sara Gelser Blouin said she is “carefully weighing her options” and a potential House run, in light of DeFazio’s announcement.

Even if a Democrat keeps the seat, the party still may lose its majority. The 2022 elections are widely expected to favor Republicans.

“I think the Republicans are measuring the curtains too early,” DeFazio said. “I expect to endorse and work hard to keep the seat in the Democrat column.”