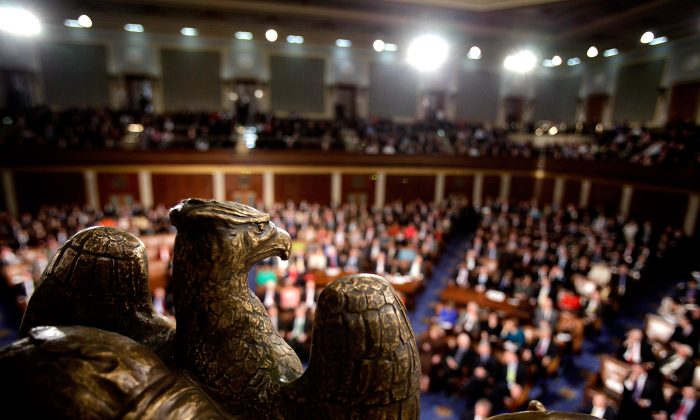 A joint session of Congress meets to count the Electoral College vote from the 2008 presidential election the House Chamber in the U.S. Capitol January 8, 2009 in Washington, DC. (Chip Somodevilla/Getty Images)
Politics

Democrats Seek to Work Around the Electoral College

A proposal to overthrow the constitutionally mandated system for electing the president and vice president of the United States—known as the Electoral College—without going through the effort of amending the U.S. Constitution has three-fifths of the support its backers say it needs to become a reality.

According to a group called National Popular Vote (NPV), the proposal “would guarantee the Presidency to the candidate who receives the most popular votes in all 50 states and the District of Columbia.” Currently, 48 states give all their electoral votes to the candidate who prevails in the popular vote in that state. Nebraska and Maine use a different formula, awarding some of their electors by congressional district.

According to a tally maintained by NPV, enabling legislation has been adopted in 11 states plus the District of Columbia, representing a total of 172 electoral votes. Those states are California, Connecticut, Hawaii, Illinois, Massachusetts, Maryland, New Jersey, New York, Rhode Island, Vermont, and Washington.

Getting Around the Electoral College

In the new Congress, House Judiciary Committee member Steve Cohen (D-Tenn.) has introduced legislation that would lead to an amendment to abolish the Electoral College.

“In two presidential elections since 2000, including the most recent one in which Hillary Clinton won 2.8 million more votes than her opponent, the winner of the popular vote did not win the election because of the distorting effect of the outdated Electoral College,” Cohen said.

“Americans expect and deserve the winner of the popular vote to win office. More than a century ago, we amended our Constitution to provide for the direct election of U.S. Senators. It is past time to directly elect our President and Vice President.”

Democrats have long sought to get around the Electoral College, which prevents the United States from political domination at the hands of major population centers, which are controlled by Democrats in so-called blue states.

Instead of amending the Constitution, a very tall order, NPV wants states to ignore their own voters and enter into an interstate compact that would hand the presidency to whomever gets the greatest number of popular votes nationally.

Constitutional amendments need two-thirds approval of each chamber of Congress, and then ratification by three-quarters of the states. Small states aren’t likely to go along with a proposal like NPV’s that would permanently water down their voting power in presidential elections.

The plan to junk the Electoral College has been in the works for years. Jonathan Soros, son of radical financier George Soros, endorsed the proposal back in 2008.

“The Constitution is no longer in line with our expectations regarding the role of the people in selecting the president,” Soros wrote in a Wall Street Journal op-ed, adding that Americans are currently at the mercy of “the tyranny of small-state logic.”

The interstate compact is unlikely to be enacted before the 2020 election, if ever. Even if it secures the state support its advocates say it needs to take effect, it would almost certainly be subjected to a mountain of legal challenges on constitutional grounds.

According to Hans von Spakovsky, a senior legal fellow at The Heritage Foundation, a national popular vote system is a recipe for chaos.

“The compact is an end run around the Constitution. It would lead to litigation,” said von Spakovsky, a former attorney with the U.S. Department of Justice and the Federal Election Commission, told The Daily Signal. “The national popular vote backers realize they will never convince the public to amend the Constitution. But they can convince [the public] to enter a compact.”

“Whoever is president is supposed to have broad geographic support,” Adams said. “People who support a national popular vote want elections decided in large urban centers. Under the Constitution, Congress would have to approve a compact between states.”

An exception is Saul Anuzis, a former Republican Party chairman in Michigan who works as a senior consultant to the NPV group. Anuzis says interstate compacts such as one between eight states regarding water use and another authorizing the multi-state Powerball lottery are legal.

State legislatures are “clearly” allowed to decide how to choose presidential electors, he said.

No Republican red states have joined the compact, but Anuzis says they should, arguing a national popular vote system would help the GOP.

“The Electoral College doesn’t protect small states. It’s not learned people discussing who should be president. That’s all horse manure.”

Defenders of the current system point out that the Electoral College was intended as a safeguard against majoritarian tyranny and to prevent larger states from overwhelming smaller states. Allowing individual citizens to directly elect the president would create “mobocracy” and allow the most-populous states to dominate the process, the thinking went, and the states with smaller populations would be ignored by candidates.

The Framers of the Constitution also rejected proposals for Congress or the states to choose the president, and instead created the Electoral College to provide for the indirect election of the president (and the vice president). Voters in the 50 states and—since the ratification of the 23rd Amendment in 1961, the District of Columbia—choose electors bound to the candidate they prefer.

The number of electors each state receives is equal to the number of seats the state holds in the Senate and the House of Representatives, with a minimum of three electors per state including the District of Columbia, for a grand total of 538 electors.

The electors meet in their respective state capitals in mid-December and formally elect the president. If a presidential candidate receives fewer than half of the electoral votes cast, the House chooses the president. The president is then inaugurated the following Jan. 20.

Usually, the individual who wins the election is the person who receives both the most electoral votes and popular votes, but not always. President Donald Trump beat Hillary Clinton in the Electoral College but garnered fewer popular votes, largely because of Clinton’s commanding popular vote lead in Democrat-dominated California.