Victory Declared for Kelly in Arizona, Would Put Democrats One Seat Away From Senate Control

Masters yet to concede, seeks to ensure 'every legal vote is counted' 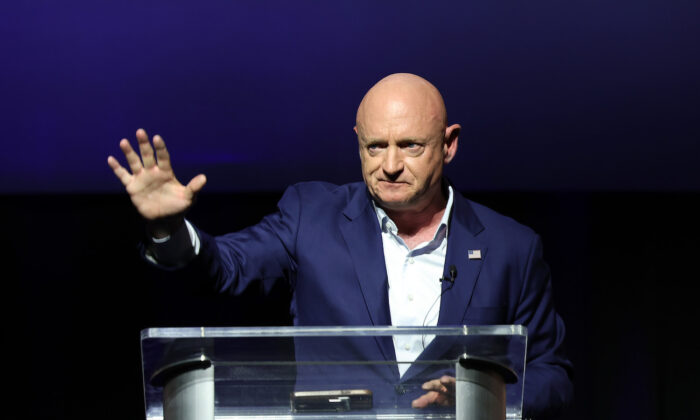 Incumbent Sen. Mark Kelly (D-Ariz.) on Friday declared victory over Republican challenger Blake Masters in the midterms after multiple media outlets called the race in Kelly’s favor. The win would mean that Democrats are one seat away from retaining control of the U.S. Senate. Meanwhile, Masters has called for “every legal vote” to be counted.

The Associated Press called the race in Kelly’s favor Friday night after Maricopa County reported a large batch of results that increased Kelly’s lead such that Masters could not make up the difference with the remaining ballots.

The AP has said it “does not make projections and will only declare a winner when it’s determined there is no scenario that would allow the trailing candidates to close the gap.”

It comes amid recent hiccups in Maricopa County with voting machines, and as hundreds of thousands of ballots remain to be counted.

The results remain unofficial until they are canvassed.

Kelly, a former NASA astronaut, was first elected in 2020 in a special election triggered by the death of Sen. John McCain (R-Ariz.), to serve out McCain’s Senate term. Kelly’s victory gave Democrats both of Arizona’s Senate seats for the first time since 1953.

Kelly and his wife, former U.S. Rep. Gabby Giffords (D-Ariz.), were at an Elton John concert in Phoenix when the AP called the race.

“It’s been one of the great honors of my life to serve as Arizona’s Senator,” Kelly said in a statement. “I’m humbled by the trust our state has placed in me to continue this work.”

Masters, who was endorsed by former President Donald Trump in the race for Senate, said on Saturday he would make sure all legal ballots are counted.

“For my people who knocked doors in 115 degree heat, and for the million+ Arizonans who put their faith in me, we are going to make sure that every legal vote is counted,” he said in a statement posted to Twitter. “If, at the end, Senator Kelly has more of them than I do, then I will congratulate him on a hard-fought victory. But voters decide, not the media; let’s count the votes.”

Trump has alleged voter fraud took place in Arizona and demanded the election be carried out again.

The former president said on Truth Social that “possibly corrupt” officials had “lost control of the tainted Election in Arizona” after the race was called for Kelly.

“This is a scam and voter fraud, no different than stuffing the ballot boxes. They stole the Electron [sic] from Blake Masters. Do Election over again!” Trump wrote on the platform.

He did not provide detailed evidence for his statements, but pointed to problems with counting votes in Maricopa County, Arizona’s most populous.

The Senate has 48 Democrats and two independents who caucus with the Democrats, as well as 50 Republicans.

In the midterm election, 34 of the 100 seats in the Senate—20 Republican and 14 Democrat—were contested. The independent seats were not contested.

If Kelly’s declared victory is taken into account, the Senate now has 47 seats for Democrats, two independent seats, and 49 seats for Republicans.

Democrats are just one seat away from retaining control of the Senate, as even with just 50 seats, Vice President Kamala Harris can cast a tie-breaking vote on their behalf.

Seats for Nevada and Georgia, which are currently held by Democrats, are still to be determined. The race in Nevada remains too close to call, while Georgia is headed for a runoff election on Dec. 6, after neither of the major party candidates received more than 50 percent of the vote.

For Republicans to win Senate control, they must claim victory in both races.

Kelly’s 2022 campaign largely focused on his support for abortion, protecting Social Security, lowering drug prices, and ensuring a stable water supply amid a drought, which has curtailed Arizona’s cut of Colorado River water.

Masters, meanwhile, called for privatizing Social Security, took a hard-line stance against abortion in favor of protecting the life of the unborn, and has voiced support for securing the U.S.-Mexico border. Masters recently said he wouldn’t vote “for a single thing that Biden wants—not a single piece of funding, not a continuing resolution, not a single appointee—unless and until he agrees to give us some border security.” He said this is the leverage that Kelly has but hasn’t used.

Masters, like Trump, has cast doubt on the results of the 2020 election due to concerns over potential election fraud.

Kelly, despite presenting himself as a moderate, has faced criticism from Arizonans for voting with his party on almost every bill the Democrats have sought to pass, including the $1.9 trillion American Rescue Plan—a spending package many economists blame for increasing inflation, the $740 billion Inflation Reduction Act, and others.

Kelly has particularly tried to talk tough on border security amid unprecedented levels of illegal immigration along the southern border. But Preston Huennekens, a spokesperson for the Federation for Immigration Reform, told The Epoch Times that Kelly and other Democrats talking tough on the border have been silent about Biden’s past decisions that critics said have weakened border security.

During his time in the Senate, Kelly has been much more in line with the policies of his party than his colleague Sen. Kyrsten Sinema (D-Ariz.), who several times has bucked White House initiatives over concerns about illegal immigration, inflation, and other economic considerations.

This article has been updated with statements from Blake Masters and Donald Trump.