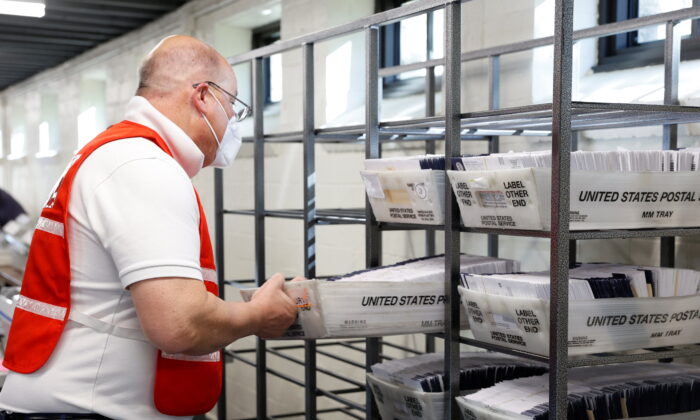 An election worker is seen as mail-in ballots are counted in Chester County, Pa., on Nov. 4, 2020. (Rachel Wisniewski/Reuters)
By Beth Brelje

The Democrat strategy of using mail-in ballots to vote played a pivotal role in last week’s election results. Pennsylvania Republicans are talking amongst themselves about how to react in the next election. Republicans have two views: get rid of mail-in voting—which seems unlikely with more elected Democrats in power—or learn how Democrats got an avalanche of mail-in votes and employ the same strategy.

The Epoch Times asked the Pennsylvania GOP to discuss the 2022 results and its strategy regarding mail-in ballots in future elections, but it chose not to participate in this story. Pennsylvania Democrats were also asked to comment on their mail-in strategy but did not respond.

In stump speeches and on social media, Pennsylvania Democrats actively encouraged voters to vote by mail in the days before the election. Often supporters would tweet at a candidate that they just mailed in their ballot.

A look at the numbers behind the election show just how much Democrats relied on mail-in voting.

According to the Pennsylvania Department of State, 1,439,579 voters requested mail-in ballots statewide. Of those, 986,540, or 69 percent, were registered Democrats, and 303,438, or 21 percent, were Republicans. The rest were independents.

When looking at individual counties, the disproportionate use of mail-in ballots by party is clear.

For example, in Philadelphia County, 165,980 mail-in ballots were requested, and of those, 86 percent went to Democrats and just 5 percent went to Republicans. That may not be surprising in a majority Democrat county like Philadelphia, which has 807,979 registered Democrats and just 120,949 registered Republicans, or in Democrat majority Allegheny County, which received 190,684 requests for mail-in ballots, 76 percent of which were Democrat and 15 percent were Republican.

But they were not as keen on Fetterman, who received 949,616 mail-in votes, that is, 36,924 fewer mail-in votes than the total number of mail-in ballots requested by Democrats.