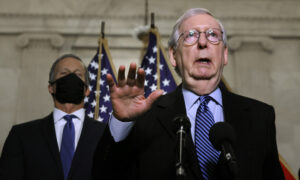 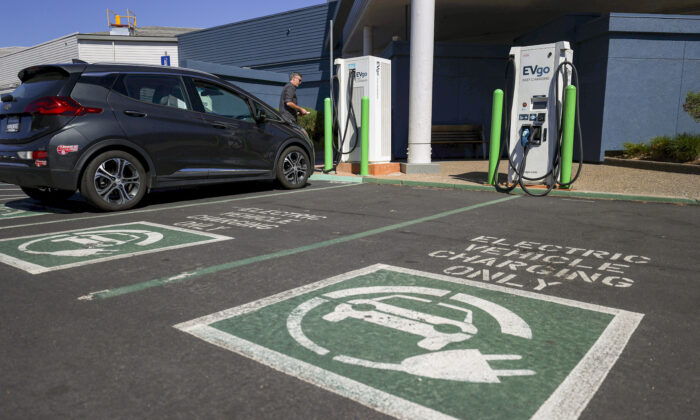 Major federal infrastructure spending was originally justified as a national defense issue. The interstate system was to secure expedient troop movement, for instance. But those days are long gone. Today’s bipartisan support for such spending stems from political expediency.

There are still bridges, dams, perhaps even airport projects, that could be defended as national security assets, but politicians no longer bother. They present infrastructure bills as a way to boost the economy and create jobs. In the latest proposal, Democrats go further still, marketing it as a part of economic relief tied to the CCP (Chinese Communist Party) virus pandemic as well as an environmental issue. The justifications range dubious to fallacious, according to David Ditch, budget and transportation researcher at the conservative Heritage Foundation think tank.

Biden administration officials leaked to The New York Times an outline of a plan to spend about $3 trillion of what they broadly subsume under infrastructure. Less than $1 trillion would go to “construction of roads, bridges, rail lines, ports, electric vehicle charging stations, and improvements to the electric grid and other parts of the power sector.”

Most of the proposal could be called a “kaleidoscope of different left-leaning priorities,” Ditch told The Epoch Times. The outline includes items from housing construction to child care subsidies.

Democrats also want the proposal to address “economic inequality.” It’s not clear how that would be accomplished besides plans to raise taxes on richer Americans and corporations.

Republicans have already voiced opposition to bills they consider loaded with “pork”—unrelated expenditures. They particularly oppose raising taxes. That leaves Democrats with the option of pushing the bills through the budget reconciliation process that only requires a simple majority in the Senate or ditching the filibuster rule.

At the same time, however, the Highway Trust Fund, which covers a large chunk of traditional infrastructure spending, is about to go bankrupt (again) in September. Congress is likely to expend some effort to pour more money in. Letting it expire would not only interrupt planned projects, but also cut short a longstanding mechanism to dish out money to interest groups, such as construction companies and unions.

Extending the trust fund is difficult to address in reconciliation, Ditch said. Thus, a necessarily bipartisan highway bill would present an opportunity to include infrastructure investment. Part of the Biden proposal seems to be aimed at purely infrastructure issues, like roads and bridges. If Republicans manage to get that part into a highway bill, that part of the Biden bill would become superfluous.

Republicans may well push for that alternative. Biden’s proposal, after all, may end up as a gigantic waste of money, according to Ditch.

First of all, infrastructure spending will do nothing to address the economic downturn caused by the pandemic lockdowns since the projects take years to take off, he explained. Federal grants come with federal regulations and application processes. Even projects that are ready to go need at least assess their compliance and prepare their application paperwork, not to mention the approval process itself. If compliance is lacking, the project needs to be reworked.

Involving federal bureaucracy invites a slew of other problems.

Local infrastructure projects should stem from the needs of local residents, prompting local officials and businesses to fulfill the need.

Involving the federal government turns the process on its head, starting with tailoring a project to federal grant requirements—often loaded with political priorities—so it has the best chance of outcompeting other applicants.

Take the Grant Avenue renovation project in Springfield, Missouri, which proposes reconstruction of 3.3 miles of a “multi-use bicycle and pedestrian path.” In 2018, the city applied for $20 million from the Department of Transportation’s BUILD program, which some Democrat lawmakers proposed to use as a template for infrastructure investment (pdf). The project budgeted over $80,000 in design, management, and “environmental” costs that year likely all tied to the application process. Proposed completion was fall 2023 (pdf).

In November 2019, the grant was awarded. In September 2020, the city reached out for community input. Perhaps some residents raised the question of why the city needs to spend $5 million to furnish the new paths with WiFi connectivity. Meanwhile, proposed completion was moved to 2025.

“The more removed local projects are from the people that use them, the harder it is for the people to enact change or to push back against bad ideas,” Ditch said.

Meanwhile, even traditional government infrastructure spending has proven a questionable economic booster. Despite the gargantuan sums involved, it doesn’t do much to create jobs as the pool of skilled workers is limited.

“There’s sort of a mentality that you can pick someone off the street and they can do construction work tomorrow and that’s not the case,” Ditch said. “Construction work is much more skilled than it was 100 years ago.”

“The mean effect it will have would be to move workers and construction firms off of private projects and towards the public projects that are getting all this extra money,” he said.

Economic research indicates that federal infrastructure spending does make a difference, generally boosting the economy in the long run by a bit under $2 for every dollar invested (pdf). But only if the projects are productive. That’s where political priorities come in play.

As it now looks, the administration wants a major portion of the endeavor to focus on reducing emissions of carbon dioxide, which many scientists blame for changes in climate. But the technologies currently favored, such as solar panels, wind turbines, and electric cars, are still less efficient than their fuel-burning alternatives.

Even for projects that aren’t directly related to the energy sector, grant applicants are likely to see “green” standards and environmental reviews causing delays and inflated costs. While protecting nature is important, the years-long federal review process provides “little to no actual environmental benefits” compared to a more streamlined review that can be done locally, Ditch said.

If the recent $1.9 trillion COVID-19 relief bill is any indication, Democrats may also want to include racial quotas, raising yet more barriers for potential applicants.

It’s as if any project the federal government touches takes longer and costs more.

“Either we get less infrastructure for our money, or we have to spend more,” Ditch said.

He also rejected the notion that there’s not enough money on the local level to fund infrastructure. When one digs into the numbers, it turns out it’s less of a revenue problem than a spending one.

“They are taking a growing revenue budget and they’re finding ways to grow costs of various things in their responsibility,” he said. “Costs of construction projects go up, compensation costs for government workers consistently go up much faster than inflation or the size of the economy.”

Sending money from Washington creates a wrong incentive, he argued.

“This is a bailout. … You’re essentially redirecting money from people who live in financially responsible parts of the country and you’re giving it to places that are financially irresponsible.”

Moreover, infrastructure spending is not a one-off endeavor. While clearing up the massive maintenance backlog on basic infrastructure would likely help the economy in the long run, it would also set a precedent of bailing out local authorities that should have budgeted for it.

“That encourages state and local governments to not spend, to sit on their hands and wait for the federal dollars,” Ditch said.

When the money comes, states and localities with fiscal issues are likely to respond by lowering their local investment budgets and redirecting the freed-up money to kick down the road the can of common malaises, such as underfunded pensions and healthcare programs for government workers.

“Next time they need a new sewer line, they need to replace the pipes, they need to build a new school or renovate an old school, rather than go to the local taxpayers, they’re going to go back to the federal government and over time we see an increasing concentration of power in Washington, D.C.,” Ditch said.

In his view, Washington is already unable to effectively dispatch its current responsibilities, not to mention grabbing more. And it makes even less sense given the current political divide.

“When everything is determined by who controls the federal government one half of the country or the other is going to be unhappy all the time,” he said.

The American Society of Civil Engineers issues a series of reports every four years outlining the state of American infrastructure, including estimated investment needs. Based on its 2021 edition and additional sources: