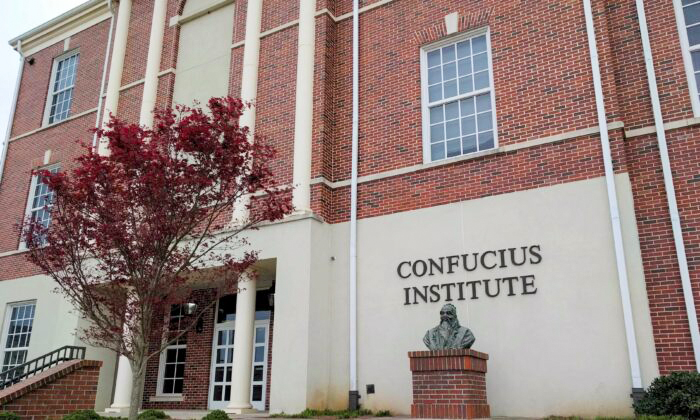 A view of the Confucius Institute building on the Troy University campus in Troy, Ala., on March 16, 2018. (Kreeder13 via Wikimedia Commons)
Threat from Communist China

As China reportedly maintains its enduring influence on American higher education by seeking to rebrand its Confucius Institutes (CI) in U.S. universities, Democrats have still refused to get tougher on the regime to counter its further infiltration, according to Republican lawmakers.

“With Joe Biden in the White House, we’re seeing … their Confucius Institute and the threats that they pose, [including] espionage on college campuses, malign influences on American universities through Confucius Institutes, have come back under different names,” Rep. Jim Banks (R-Ind.) recently told the “Capitol Report” program on NTD, an affiliate of The Epoch Times.

“The threat is still there. In fact, it’s growing because we have an administration that isn’t just turning a blind eye, they’re welcoming a rise of Chinese malign influence in the United States,” Banks said.

“Under President Trump, for the first time ever, we had an administration that took the China threat seriously. We saw almost every Confucius Institute in America shut down on Donald Trump’s watch,” he added.

Rep. Greg Steube (R-Fla.) echoed his view, saying, “You will not see anything from the Democrats come against China.”

Steube attributed the inaction of the Democrats on this foreign threat to the compromise of the Biden family by the Chinese Communist Party (CCP).

“The Biden family is compromised by the Chinese Communist Party when they have given billions of dollars to Hunter and his aligned companies,” Steube said.

Entities connected to Hunter Biden in 2017 and 2018 received millions from Chinese energy giant CEFC China Energy and firms tied to the company, according to bank records revealed by senators in March.

“The Democrats on the other side of the aisle see that China is a threat, but are completely unwilling, politically, to take them on,” Steube added.

Banks called “the rise of Chinese malign influence in the United States is shameful.”

The Epoch Times has reached out to the White House for comments.

The author of the report titled “After Confucius Institutes: China’s Enduring Influence on American Higher Education,” Rachelle Peterson unveiled the re-popping up of the CCP-backed group in an interview with NTD.

“We thought [CIs] had pretty much died out in the United States. But it turns out they have reincarnated themselves under a variety of new names,” Peterson said.

“So the problem isn’t gone. It has just been renamed and become a lot harder to track,” she added.

Out of the 118 CIs in the United States, about 105 have closed or announced closures. However, at least 38 colleges have replaced their closed CI programs with similar alternatives, according to the report by the National Association of Scholars (NAS), a conservative research and advocacy organization.

Peterson said that under the guise of the new name, the group still offers Chinese language and culture programs, “but it’s Chinese culture as approved by the Chinese Communist Party.”

It means the topics of ethnic minorities, religious minorities, Tiananmen Square massacre, and the status of Tibet and Taiwan are all excluded.

“It’s everything the Chinese government would want you to know about China and nothing else,” she emphasized.

Peterson further pointed out the strategic target that drives the operation of the institutions on American soil.

“But it’s also a way to have a strategic outpost on a college campus and keep an eye on Chinese students who are studying abroad, keep an eye on research and technology that is developing at the university, and just have an ear to the ground,” Peterson added.

Steube referred to the Protecting Higher Education from Foreign Threats Act, which he introduced back in March 2021 as a tool to push back the threat posed by the Chinese regime.

The bill, co-sponsored by seven other Republican lawmakers, seeks to “prohibit the award of Federal funds to institutions of higher education that employ instructors funded by the Chinese Communist Party.”

“The only way you’re going to get [U.S. higher education and research institutes] to be compliant is trying to take away the resources they get from the federal government,” he said.

Peterson shared the same view, saying, “The U.S. government should consider instituting a tax on Chinese gifts to colleges and universities, or even putting a cap on the amount of money that they can receive from Chinese sources before jeopardizing eligibility for federal funds.”

Banks also suggested better oversight, better guardrails, and holding accountable these universities who turn a blind eye to this threat.

“So we need better guardrails on how research is funded in America and who’s participating in that research, and there needs to be more accountability,” Banks said, as “malign CCP influences on college campuses in America continue to be prevalent.”