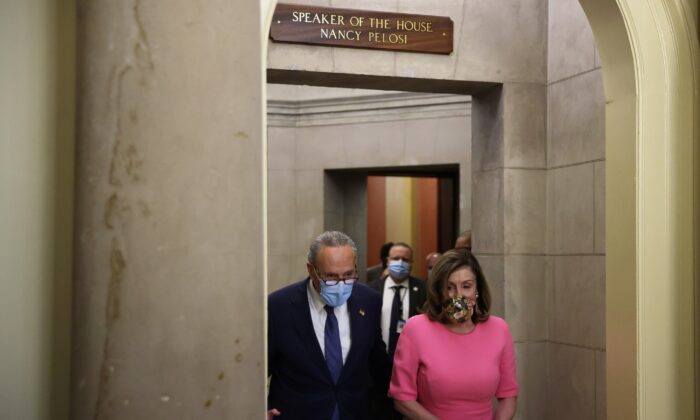 Returning from their Thanksgiving break, Democrats in Congress have challenges ahead of them as the nation inches toward a Friday deadline to avert a government shutdown and a Dec. 15 deadline to raise the debt ceiling.

The first hurdle for Democrats to vault in their first week back will be to avert a government shutdown, which will come on Dec. 3, Friday, if a continuing resolution or stopgap funding bill is not passed to continue to fund the government.

Because lawmakers from both parties broadly supported the last stopgap funding measure, voting 254–175 to pass the bill through the House and 65–35 to pass it through the Senate, it is likely that there will be bipartisan support for another stopgap bill to avert a government shutdown, which would see federal employees furloughed and government services reduced.

But raising the debt ceiling will be much more difficult for Democrats. While averting a government shutdown had bipartisan popularity, Republicans and Democrats are far more divided over the issue of the debt ceiling.

Treasury Secretary Janet Yellen has said that her department is using “extraordinary measures” to continue to finance U.S. debt, but has warned that these may not be sustainable after around mid-December.

If the debt ceiling is not raised, the United States will default for the first time in its history, which Yellen has warned would have “catastrophic” consequences.

Since August, Republicans have insisted that they will not help Democrats to raise the debt ceiling, demanding rather that the party use the reconciliation process to pass a debt ceiling increase along party lines.

Republicans have argued that if Democrats are willing to pass President Joe Biden’s sweeping $1.85 trillion social spending legislation using the process, they should have no reservation about using the same process to raise the debt ceiling.

At the same time, Republicans have emphasized that they want the debt ceiling to be raised and do not want the nation to default, but are equally opposed to helping Democrats to raise the debt ceiling.

However, Majority Leader Schumer has rejected this approach.

Democrats, including Schumer, Speaker of the House Nancy Pelosi (D-Calif.), and President Biden have suggested that Republicans are irresponsible for their refusal to raise the debt ceiling, which they have claimed has been historically bipartisan.

But this is far from the case. While Democrats and Republicans voted together to raise the debt ceiling three times under President Donald Trump, raising the debt ceiling has historically been a rather partisan affair.

In 2006, then-Senator Joe Biden and Chuck Schumer joined their party in voting almost unanimously against raising the debt ceiling under President George Bush, citing disagreements with Bush’s leadership. Speaking on his vote at the time, Biden explained that the debt ceiling should be raised, but that Democrats should not help Republicans to do so, echoing Republican arguments amid the current controversy.

The debt ceiling has been a relatively low priority for Democrats through November as they desperately tried to rally support for the $1.2 trillion infrastructure bill and the $1.85 trillion social spending bill. But now, with the infrastructure bill signed into law and the budget bill passed through the House, Democrats will be forced to return their focus to the debt ceiling issue.

Republicans, for their part, have given no indication that they have had a change of heart, and without at least 10 Republican defectors, reconciliation may be the only option available to Democratic leadership—even as Democrats insist that they are not considering such a course.