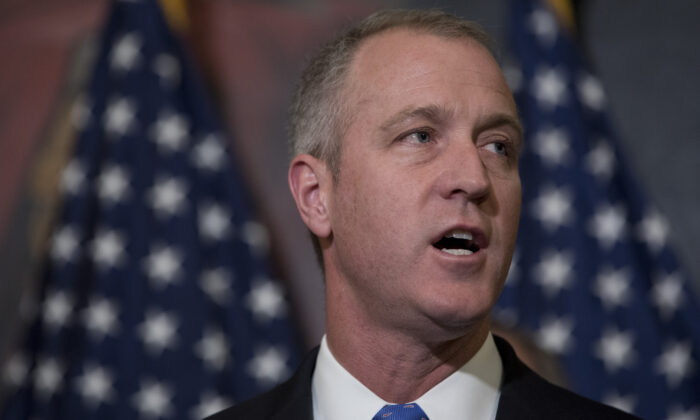 Rep. Sean Patrick Maloney (D-N.Y.) speaks at a press conference introducing the Equality Act on Capitol Hill in Washington on May 2, 2017. The 2021 version of the bill was passed by the House on Feb. 25. (Aaron P. Bernstein/Getty Images)
Congress

House Democrats approved the Equality Act of 2021 the afternoon of Feb. 25 following a rancorous debate in which Republicans said the controversial bill will significantly narrow the scope of religious freedom if it becomes law.

The Equality Act prohibits discrimination due to gender identity or sexual orientation. Three Republicans joined all 221 Democrats in the lower chamber to support its passage, while the remaining 208 Republicans opposed the proposal, which was approved as expected. The three GOPers voting with the Democrats included John Katko and Tom Reed of New York, and Brian Fitzpatrick of Pennsylvania.

A similar version of the bill was approved by the Democratic House in 2019, but it failed to pass in the Republican-controlled Senate. Passage in the Senate is again somewhat in doubt as the upper chamber is evenly split between the two parties, with Vice-President Kamala Harris (D-Calif.), who supports the proposal, to cast the deciding vote in the event of a tie.

The House debate got hot almost as soon as it started. Only a few minutes in, Rep. Sean Patrick Maloney (D-N.Y.) branded as “ridiculous” Republican claims that the bill represents a threat to religious freedom.

Maloney also argued that Republicans “believe LBGTQ are morally inferior,” and taunted the measure’s opponents for “their real argument, that is, they are pro-discrimination against gay people.”

Maloney’s angry outburst prompted Rep. Jim Jordan (R-Ohio), floor manager of the opposition ranks during the 90-minute debate to stand, to hold up a sheaf of paper and declare: “Here it is, on page 25. It says specifically, ‘The Religious Freedom Restoration Act (RFRA) of 1993 shall not provide a legal basis for a claim’ [against a discrimination charge].

“The founders said in the first right, in the First Amendment to the Constitution, you can practice your religion as you see fit. But right here in their bill today, the Democrats say ‘No you can’t.’”

Jordan’s citation from the bill text, however, didn’t change the tone of the discussion, as a few minutes later in the debate, Rep. Al Green (D-Texas), turned to the Republicans and shouted: “You used God to enslave my poor parents. You used God to segregate me in the schools. You used God to put me in the back of the bus. Have you no shame?”

Similarly, Rep. Mike Quigley (D-Ill.) declared near the end of the debate that the religious freedom arguments presented by the Republican opposition were “transphobia,” “homophobia,” and “hate.”

The 500-plus page bill redefines “public accommodation” in the Civil Rights Act of 1964 to include “any establishment” that provides a service, including churches, homeless shelters operated by religious groups, adoption agencies, and educational institutions associated with faith-based denominations and associations.

And, as Jordan pointed out, the bill explicitly sets aside a provision of RFRA that specifically protects the right of religious groups to conduct their activities and manage their affairs according to their beliefs.

House Judiciary Committee Chairman Jerry Nadler (D-N.Y.), manager of the bill’s supporters, responded to the GOP’s RFRA argument that he was a co-sponsor of the bill when it was approved by Congress. He said the Equality Act “does not contradict religious freedom, but it does enshrine equality, and that’s what they seem to be afraid of.”

Republicans repeatedly noted during the debate that the bill was brought to the floor for debate and final passage without any prior hearings in committees that would have allowed opponents and supporters to bring forward witnesses and evidence to support their arguments.

“Unfortunately, this is another bill which didn’t go through the committee process, or real debate. The judiciary committee should have had an opportunity to consider H.R. 5 in a legislative hearing,” Rep. Victoria Spartz (R-Ind.) said. “I am not sure why we even bother to have committees when we pass significant legislation without them.”

Following the vote, Rep. Mike Kelly (R-Pa.) issued a statement saying, “All people should be treated with respect and no one should face discrimination in their daily lives, but this extreme bill would erode our nation’s progress toward women’s equality and threaten religious liberty enshrined in the First Amendment.

“If enacted, it will have real-world consequences such as biological men participating in women’s athletics. It is shocking that Democrats think this is good for society and a political priority.”

Also after the vote, Kristen Waggoner, General Counsel for the Alliance Defending Freedom, a Phoenix, Arizona-based public interest advocacy group, said in an emailed statement: “The freedom to live peaceably according to our beliefs is a fundamental right, resting in our human dignity and codified by the First Amendment. Any legislation that hides behind ‘equality’ or ‘fairness’ but undermines these constitutional freedoms is misguided, at best, and hostile, at worst.

“The House has irresponsibly bypassed the committee process and curtailed debate over this sweeping and coercive legislation. In short, Congress has no business forcing every American to agree with a controversial government-imposed ideology on sexuality or be treated as an outlaw. We ask the Senate to reject this dangerous bill, for the good of all Americans.”

Prior to the debate, religious freedom advocates interviewed by The Epoch Times said the measure, if it becomes law, will put religious institutions at a serious disadvantage in federal and state courts when facing discrimination allegations.

“Equality Act would eviscerate the protection offered by federal law for those Americans who seek to live out their faith in their schools, businesses, and communities, relegating people of faith to lower-class status,” Mike Berry, General Counsel for the First Liberty Institute, told The Epoch Times. Berry’s public interest religious liberty law firm is based in Plano, Texas.

“Religious and nonprofit schools that violate the bill could lose their tax-exempt status and schools could lose accreditation—which means they could not accept student loans and many graduates would not be able to be accepted into graduate schools,” Liberty Counsel said in an analysis of the bill released Feb. 24.

Liberty Counsel also predicted in a separate statement issued Feb. 25 that passage would represent a serious blow to women’s sports, as protected by Title IX of 1972.

“Title IX was created in order to ensure that women had access to equal opportunities as men, including in sports. Now that is threatened as H.R. 5 ignores the biological differences between male and female and erases the unique talents and achievements of girls and women,” the Liberty Counsel analysis said.

“Allowing biological males who self-identify as ‘women’ to compete against biological females, puts women at a disadvantage and can cost female athletes the titles, records, and scholarships that are rightfully theirs and can even lead to serious sports-related injuries.”