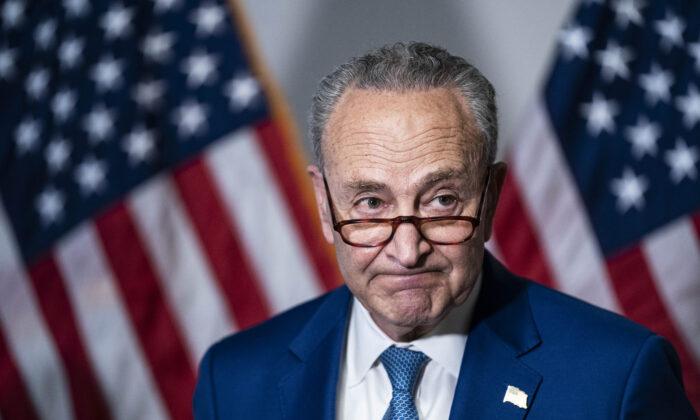 Since returning from their winter break, congressional Democrats and President Joe Biden have made a renewed push to approve election legislation. But despite Democrats’ claims that states are engaged in an all-out assault on voting rights, Democrats continue to lack substantial Republican support for any elections measure, and this situation is unlikely to change before November’s midterm elections.

The first indication that Democrats would be renewing their push for election reform came on Jan. 3 in a Twitter post from Senate Majority Leader Chuck Schumer (D-N.Y.).

“What happened on [Jan. 6, 2021] is directly linked to the one-sided, partisan actions being taken by GOP-led state legislatures across the country,” Schumer wrote.

Specifically, Schumer is referencing the moves by state legislatures to strengthen their own voting laws in the wake of the 2020 election. After that election, which was rife with statistical anomalies, many were left concerned about the integrity of U.S. elections.

To address these concerns, state legislatures across the nation have approved new election legislation that strengthens voter ID and absentee balloting requirements in addition to other reforms.

Since well before the 2020 election, Democrats have said these sorts of requirements disproportionately affect minorities. However, the Supreme Court addressed this question recently and ruled that Democrats’ claims were untrue.

In the case of Brnovich v. Democratic National Committee (DNC), the DNC argued that a new Arizona law that changed voter ID and absentee voting guidelines was meant to suppress the minority vote and was thus illegal under the Voting Rights Act (VRA). Arizona Attorney General Mark Brnovich, who has been eyed as a potential challenger to Sen. Mark Kelly (D-Ariz.) in 2022, argued that the DNC’s assessment was wrong.

The court sided with Brnovich, ruling that statutes similar to those in the Arizona law were permissible under the VRA.

Still, Democrats have continued to maintain the position that the Supreme Court is wrong and that the efforts by states to strengthen their voting laws constitute what many Democrats say are “new Jim Crow” laws.

Schumer’s Jan. 3 statement on Twitter made it clear that Democrats would be focusing on the issue once they returned from winter break.

“We can and must take strong action to stop this anti-democratic march,” he wrote.

Thus far, Democrats have two courses to meet this end.

The first involves revamping the Electoral Count Act of 1887 (ECA).

This law—approved 10 years after the end of the northern occupation of the south at the conclusion of the American Civil War—was intended to address electoral problems raised during the 1876 presidential election. During that election, several states sent competing slates of electors to Congress, leaving Congress scratching its head over which votes they should count. This constituted a veritable election crisis, and concerns were heavy that a solution wouldn’t be reached by Inauguration Day.

Ultimately, Democrat Samuel Tilden agreed to allow Republican Rutherford B. Hayes to take the victory, but only on the condition that Hayes would immediately remove military occupation forces from the south. Hayes agreed to do so, but the issues raised during that election still showed Congress that action was necessary to prevent a similar electoral crisis in the future.

In brief, the ECA left it up to states to work out such conflicts in the future. The ECA laid out the conditions under which Congress would arbitrate disputes, but this was mostly limited to situations where a governor had confirmed two competing slates of electors. Congress was also given the right to reject electoral votes over ministerial errors, such as a typo; over the ineligibility of a voted-for candidate to hold the presidency; or if the electoral votes weren’t “regularly given.”

Some Democrats have suggested that while revising the ECA would be less extensive than a new standalone election measure, it may also be seen more favorably with some Republicans, such as Sens. Mitt Romney (R-Utah), Thom Tillis (R-N.C.), and Roger Wicker (R-Miss.).

There’s some indication that this course could gain some Republican support. While speaking to reporters on Jan. 11, Sen. Susan Collins (R-Maine) indicated that she would be on board with such a proposal.

Still, the support of these sometimes-swing voters wouldn’t be enough to push an ECA reform over the finish line. Like all legislation in the Senate, an ECA revision would need to get a more than 60-vote threshold to avoid death-by-filibuster. This means that 10 Republicans would need to support the legislation.

And past experience makes this unlikely. Since the summer of 2021, Democrats have pushed through a slew of elections legislation, ranging from huge overhauls of elections that would put them entirely in the control of the federal government to smaller-scale compromise measures.

One such compromise measure, created with the help and input of Sen. Joe Manchin (D-W.Va.), won the support of Collins. But every other piece of legislation proposed by Democrats has faced unanimous opposition and filibusters by Republicans, and this track record makes it unlikely that Democrats can garner the support needed for a reworking of the ECA.

The second option that Democrats have been peddling is a revival of the “John R. Lewis Voting Rights Advancement Act” (H.R. 4).

H.R. 4, introduced during the summer of 2021 by Rep. Terri Sewell (D-Ala.), is less wide-reaching than other legislation that Democrats have proposed.

In contrast to the “For the People Act,” which would mandate that states allow felons to vote and which critics say would effectively legalize voting by illegal aliens, H.R. 4’s biggest change to voting laws would be to restore federal preclearance requirements initially laid out under the VRA.

Under the VRA, states that the federal government considered as having a “history of discrimination” were barred from changing their election laws without federal “preclearance,” or federal approval.

H.R. 4 would reintroduce this provision to respond to the Supreme Court’s 2013 decision in Shelby v. Holder. In that case, the Supreme Court ruled that the situation of minorities had changed so dramatically between the provision’s introduction in 1965 and 2013 that the “extraordinary measures” employed by the measure could no longer be justified, and the court thus struck the provision down as unconstitutional.

Speaking on the House floor, Sewell said that her legislation would “restore key provisions of the VRA that were gutted by the Supreme Court” and “would once again prohibit any state or jurisdiction with a history of discrimination from implementing any election changes without receiving preclearance from U.S. Department of Justice.”

Previously, this legislation was approved by the House, but faced death-by-filibuster in the Senate.

To overcome the objections of one-half of the nation’s elected senators, many Democrats are calling for the wholesale destruction of the filibuster, as this is the only way that Democrats can approve such an unpopular measure through the deliberative upper chamber. Technically, Democrats could do this. Under the “nuclear option,” Senate rules can be changed by a simple majority vote. However, this course has been one that senators from both parties have long been hesitant to use.

While one party is in control of the Senate, such a rule change would indeed give them significant leeway to approve legislation that would otherwise be unable to overcome a filibuster. However, once that same party finds itself in the minority, it will have practically no ability to stop the opposing party from approving legislation that it considers to be bad.

Sen. Kyrsten Sinema (D-Ariz.), who has in the past opposed making changes to the filibuster, made just such a point while defending the filibuster during an appearance on “The View.”

Sinema said the filibuster wasn’t a good or a bad thing in and of itself, but is nothing more than “a tool,” in that its value comes from “the way we utilize it.” Specifically, she called it a tool “for the protection of the minority,” and noted that Democrats have used it to stop Republican legislation just as often as Republicans have used it to stop Democrat legislation.

Also opposed to wholesale filibuster reform is Manchin, a longtime ally of Sinema.

In the aftermath of the 2020 election, when it became clear that Democrats would take the Senate in a surprise flip, Manchin took to Fox News to calm moderate and Republican fears over what the party would do.

Manchin noted during that appearance that Democrats could change the filibuster. But he noted that such a course would require the consent of all 50 Democrats and Vice President Kamala Harris. Manchin vowed that he wouldn’t be the 50th Democrat to vote for such a course.

Sen. Dianne Feinstein (D-Calif.) has also expressed lukewarm opposition to a filibuster change to approve voting legislation in the past. The long-serving Californian told Forbes that “if democracy were in jeopardy, I would want to protect it,” but said that she “[doesn’t] see it being in jeopardy right now.”

And these aren’t the only senators who have opposed a filibuster change in the past. Practically every Democratic lawmaker has, at some point over the past four years, expressed only tepid support for such a course, while many others have flat out opposed the proposal.

Thus, this second course also lacks the votes on both sides of the aisle, as it’s all but guaranteed that no Republican will aid Democrats in this endeavor.

Despite this renewed push for electoral reform, Democrats are unlikely to be able to make any significant changes to election law unless the situation on Capitol Hill transforms dramatically. Thus far, there has been no indication that such a transformation is imminent, especially as many Republican senators face tough reelection battles later in 2022.