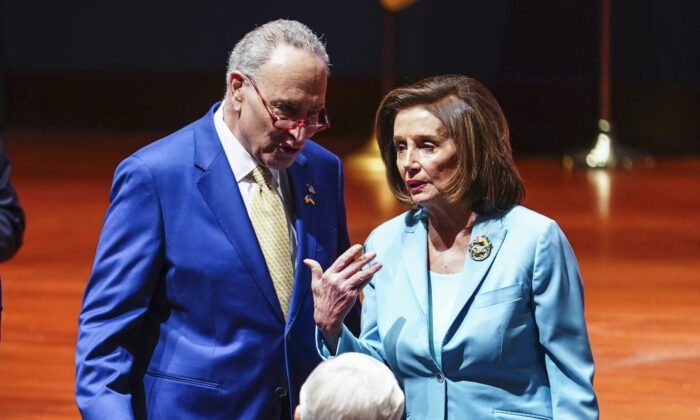 Democrats’ bill to codify the standards laid out in Roe v. Wade does not mention the word “woman,” despite their attempts to display the legislation as being designed to protect women’s rights.

Under the 1973 decision in Roe v. Wade, all 50 states—including over two dozen states with full bans on any abortion—have been required to allow the controversial procedure through at least the first trimester of pregnancy under the so-called “viability standard.” Republicans and pro-life activists have long criticized the decision as an infringement on states’ rights and have worked diligently to have the case overturned.

A leaked draft opinion published by Politico, and later verified as authentic by court officials, revealed that the Supreme Court (SCOTUS) is poised to do just that, leaving Democrats to work frantically to find a way to preserve the Roe standard.

As part of this effort, Senate Democrats are set to vote May 11 on the “Women’s Health Protection Act,” which would codify the standard. However, the bill has little chance of passing in the upper chamber, where it must overcome a 60-vote threshold to go to a floor vote in the Senate.

A different version of the bill was passed by the House of Representatives in September 2021 in a party-line vote, with Rep. Henry Cuellar (D-Texas), a pro-life Catholic, being the only Democrat to oppose the bill.

That bill stated that abortion services are a constitutional right, as decided by SCOTUS in Roe v. Wade, and that access to abortion “has been obstructed across the United States in various ways,” including by state laws.

It also stated that health care providers would be able to carry out abortions with virtually no limitations or requirements, a provision aimed at preempting new state laws, as well as superseding some current state laws restricting the procedure.

However, the legislation floundered in the Senate, where Republicans criticized it as being too radical. Even Sen. Joe Manchin (D-W.Va.), who supports the Roe standard, suggested that the bill went too far.

Now, with the threat of Roe’s repeal looming on the horizon, Democrats have attempted to soften the bill’s language.

But the new draft of the bill has raised eyebrows for its failure to include the words “woman” and “women,” despite Democrats’ attempts to present the abortion issue as a question of women’s rights.

Rather, the bill’s language covers any “person” who is pregnant.

The language of the bill conflicts with statements made by Democrats, who have described the issue as a women’s issue through gendered language like “women” and “mom.”

Rep. Pramila Jayapal (D-Wash.), leader of the 96-member Congressional Progressive Caucus, said in a May 2 tweet, “As one of the 1 in 4 women in this country who have chosen to have an abortion, I am outraged & disgusted by the reported draft SCOTUS opinion.”

“If tonight’s news is true, Michigan’s 1931 state law banning abortion would snap back into effect, making any abortion illegal in our state—even if the mom will die, or if she was raped by a family member. No exceptions,” she wrote on Twitter. “My poor mother is turning over in her grave.”

“Tomorrow, the Senate will vote on the Women’s Health Protection Act,” Sen. Tammy Baldwin (D-Wis.) wrote on Twitter. “If you support #RoeVWade and want it codified to protect the freedom and reproductive rights of women, let your voice be heard today!”

The Senate is set to vote on the legislation on May 11, but because it will need to overcome the Senate’s 60-vote threshold, the bill is all but doomed to fail due to GOP objections.