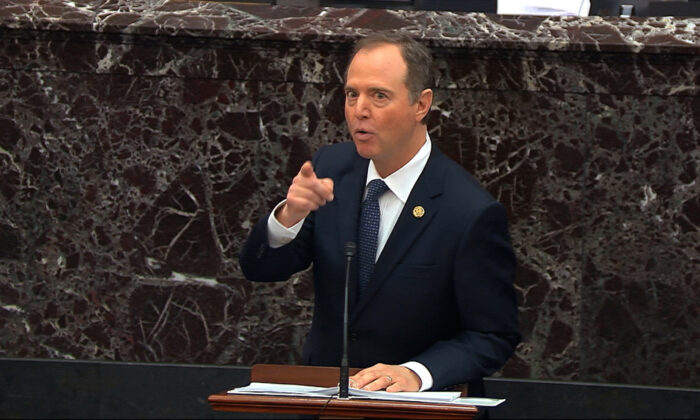 In this image from video, House impeachment manager Rep. Adam Schiff (D-Calif.) speaks during the impeachment trial against President Donald Trump in the Senate at the Capitol in Washington on Jan. 22, 2020. (Senate Television via AP)
Viewpoints

Since the election of President Donald Trump—or perhaps even before—the Democratic Party, assisted or led by the mainstream media, has been Russia’s best domestic ally.

Distaste for Trump by the Democrats and the media is so extreme, it’s almost as if they don’t realize that or don’t care.

It couldn’t be more obvious.

The objective of Russian intelligence—as it has been from the time of the czars onward—has been to sow discord via disinformation among their adversaries. It’s a lot cheaper and easier to do than the tedious game of spying. Just get your opponents to hate each other.

If you are unaware of how this works, read “Disinformation” by Ion Pacepa, the highest-ranking intelligence figure from the Eastern Bloc ever to have defected.

No one appears to work harder on Moscow’s behalf—consciously or unconsciously—than Rep. Adam Schiff (D-Calif.), whose nonstop lies about Trump–Russia collusion, followed by the nonsensical, interminable impeachment episode should make him a colonel in the KGB (or the FSB, to be more contemporary). In the old days, it would have won him the Order of Lenin—given in secret, of course.

The latest round of this endless disinformation, as reported by The New York Times, is a supposed intelligence leak that the Russians are at work once again sabotaging our election, trying to reelect Trump this time.

For some reason, we are to believe they prefer Trump to Sanders when it was the latter who took his honeymoon in the Soviet Union. Or maybe it’s Elizabeth Warren they fear. She did sound fierce in the latest debate. Maybe Putin doesn’t want her giving him what for the way she did Michael Bloomberg.

Actually, it’s simple. You don’t have to be John LeCarré or Graham Greene to see what’s going on here. The Dems and the media are so hungry for something, anything, to get Trump, the Russians don’t have to do much of anything.

It’s like chumming a school of starving catfish. A couple of easily overheard cellphone conversations or maybe a text message or two in Cyrillic, and off we go.

Putin and company must be laughing hysterically. They can hardly believe their luck. How much longer can this go on? (Good question.) They have no reason to stop or try a new tack as long as the Democrats cooperate.

And doubtless, they will. Given the way the election is shaping up, the Dems and their media friends will do anything they can to invalidate it, cry voter suppression, and whatnot. The FSB will be ready and willing to provide, not to mention a gaggle of freelancers in Novosibirsk or wherever.

And, if we are to believe The New York Times article by Adam Goldman linked above (who knows?), the president will then take umbrage, afraid that the Democrats will exploit the situation and give the Russians even more of the dissension they want.

My advice to POTUS, if he would like to defuse matters and put an end to the Democrats being the Russians’ inadvertent “besties,” he should just relax and make fun of the whole business instead of complaining.

As some readers will recall, a year or more ago, some Russian comics showed the way in a phone call to Schiff that had the California congressman desperately looking for nonexistent “kompromat” on the president.

It remains the best, and easily the funniest, political prank of our times. As a lesson in humility, they should play it again and again in front of the House Intelligence Committee.

Roger L. Simon, senior political columnist with The Epoch Times, is also an award-winning author and an Academy Award-nominated screenwriter. His latest book is “The GOAT.”