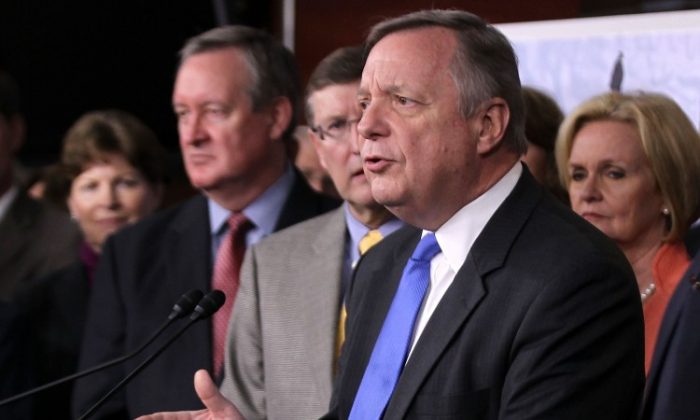 A group of Democratic and Democratic-aligned senators unveiled legislation on Feb. 1 that would make several changes to the 1887 Electoral Count Act (ECA), which Democrats hope will be more acceptable to some Republican moderates.

“As leaders on the Senate Rules Committee with jurisdiction over federal elections and members of Senate Democratic leadership, we have been working with legal experts and election law scholars to develop legislation that would modernize the framework of the Electoral Count Act of 1887,” King, Klobuchar, and Durbin said in a statement on the proposal.

Amid ongoing contention over potential fraud in the 2020 election, President Donald Trump tried to persuade Vice President Mike Pence to use his role under the original ECA to challenge the results in several state elections that posed the highest risk of widespread fraud. Pence refused, allowing Joe Biden to be confirmed as the president-elect by the Senate.

The updated ECA would change federal law to significantly lessen the vice president’s role over elections. The legislation would also significantly raise the requirements for members of the House or Senate to object to certifying election results.

The legislation would also narrow the list of potential objections lawmakers can make to certifying a slate of electors.

During the 2020 election, disputes over election results in various states continued well into December 2020. Under the ECA revision, future state-level election disputes would need to be resolved by a set deadline.

Through these changes, the new proposal would “[serve] as a foundational outline for key reforms that address the shortcomings of the 1887 law,” according to the trio of lawmakers.

A separate group of lawmakers, including swing-voting Sens. Mitt Romney (R-Utah), Joe Manchin (D-W.Va.), and Susan Collins (R-Maine) have spent the past several weeks working on their own draft of an ECA revision. Senate Minority Leader Mitch McConnell (R-Ky.) has also suggested that he may be open to an ECA reform.

“I think it needs fixing, and I wish them well in that effort,” McConnell told reporters when asked about the effort to revise the ECA. “I’d be happy to take a look at whatever they [come up with].

“I encourage the discussion because I think [the current ECA] is flawed.”

He also said these flaws are “directly related to what happened on Jan. 6.”

The “Stop the Steal” protest at the Capitol on Jan. 6, 2021, has been a focal point for many of the plan’s proponents, who have marketed the rally as a full-scale insurrection against the U.S. government.

Over the course of the 117th Congress, Democrats have made several efforts to radically revamp U.S. election law.

One of the most wide-reaching proposals the majority party has put forward was the For the People Act, which would have, among other things, forced states to allow convicted felons to vote—including convicts actively serving on probation or parole. Critics of the legislation, including Sen. Ted Cruz (R-Texas) and the Federation for American Immigration Reform, also argued that through its significantly weakened election security rules, the For the People Act would have effectively given illegal aliens the right to vote.

The effort, which had little chance in any event of making it through the 50–50 Senate, was killed after Manchin said he wouldn’t vote for the measure.

Since then, Democrats have put forward several other proposals to reform federal election laws, but these have thus far all been killed by Republican filibuster.

Republicans have argued that the measures were designed to unfairly benefit Democrats over Republicans, and only one of the measures, a compromise measure spearheaded by Manchin, received any Republican support. Manchin’s legislation won over swing-voting Sen. Lisa Murkowski (R-Alaska), but the measure also failed to meet the 60-vote filibuster threshold.

Enacted 10 years after the electoral crisis of the 1876 election, when states sent competing slates of electors to Congress, the original ECA laid out basic guidelines for electoral counting procedures moving forward. Effectively, the ECA told states that they would need to deal with electoral disputes on their own.

Congress would only get involved in electoral disputes under limited circumstances. For instance, if a governor certified and sent to Congress competing slates of electors, the ECA gave Congress the power to adjudicate the dispute.

If approved, either of the proposed revisions to the ECA would constitute one of the largest revisions to U.S. election law since the 1965 Voting Rights Act.