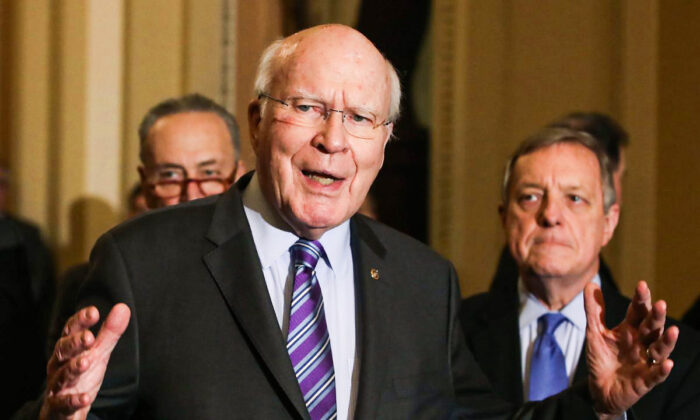 A coalition of 11 Democratic senators asked President Joe Biden in a Monday letter to take extreme steps to combat soaring gas prices, including banning the export of U.S.-sourced crude oil and drawing on resources stored in the nation’s Strategic Petroleum Reserve.

Since Biden’s inauguration, data from the U.S. Energy Information Administration shows that average gas prices have increased every month, shooting up from $2.42 per gallon in January to $3.384 per gallon in October.

These increased prices have been a rallying cry for Republicans against the administration in the past, with one coalition of Republicans calling on Biden to reverse his “anti-American energy policies.”

The signatories of the letter insisted that the Organization of Petroleum Exporting Countries (OPEC), which the senators allege has “purposefully manipulate[d] gas prices” by limiting the supply of oil, is responsible for the rising costs.

Still, the senators insist that, “as the United States work[s] to boost the development of clean and renewable energy over the long-term, we must ensure that Americans are able to afford to fill up their cars at the pump in the meantime,” echoing a similar statement made by the president at the United Nations climate change conference.

The senators emphasized the urgency of the situation, noting that gas prices are currently the highest that they have been since 2014 and have increased by $1 on average compared to this time last year.

“In our home states,” the letter continues, “high gasoline prices have placed an undue burden on families and small businesses trying to make ends meet, and have proven especially burdensome as our constituents continue to recover from the economic fallout of the COVID-19 pandemic.”

The senators concluded the letter with a plea that Biden take several actions to immediately lower consumer fuel prices. “In light of these concerns, we ask that you consider all tools available at your disposal to lower U.S. gasoline prices.”

One such tool, the senators said, is a “release from the Strategic Petroleum Reserve.”

The Strategic Petroleum Reserve (SPR), which began in the mid-1970s in response to a severe shortage of oil caused by an OPEC embargo, was created to ensure that such severe fuel shortages would not happen again in the future. Currently, around 610 million barrels of oil are sitting in wait at SPR facilities (pdf).

The SPR’s supply has rarely been drawn into. The U.S. government granted some of its oil reserves to Israel during the 1970s, and the SPR was also depleted after Hurricanes Katrina and Rita in 2005. Still, these uses remain rare, as the U.S. government has been hesitant to use the supply when not strictly necessary.

Aside from drawing into the SPR, the 11 Democrats also called for a temporary ban on U.S. oil exports.

“Continued U.S. exports … could be devastating to many in our states, contributing to higher bills for American families and businesses,” they warned.

The cause of the ongoing oil shortage has been disputed.

While Republicans and Democrats agree that collusion by OPEC is leading to a rise in prices, Republicans have alleged that the president’s own energy policies have contributed to the crisis.

Since taking office, Biden has distanced his administration from several energy policies endorsed by former President Donald Trump. A string of executive orders in the early days of Biden’s presidency reversed several Trump-era policies, fulfilling promises that Biden made on the campaign trail in 2020 that he would “transition [away] from the oil industry.”

To achieve these ends, Biden halted construction on the Keystone pipeline, and suspended new oil and natural gas leases on federal lands, among other executive actions.

These efforts, directed toward the goal of reducing U.S. emissions by 50 percent by the year 2030, have been met with both support and criticism, including criticism from Republicans who have called for an immediate reinstatement of Trump’s energy policies.

The White House has not publicly responded to the petition by these Democratic senators, but several on the list are high profile lawmakers, including Patrick Leahy, the sitting President Pro Tempore of the Senate, and Elizabeth Warren, who competed with Biden for the party’s nomination in the 2020 presidential campaign.