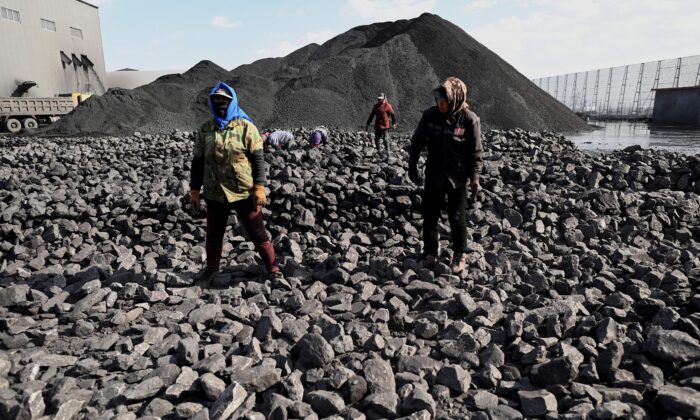 Workers sort coal near a coal mine in Datong, China's northern Shanxi Province on Nov. 3, 2021. (Noel Celis/AFP via Getty Images)
By Katie Spence

Environmentalists have captured the Democratic party and, in their push towards Net Zero, are aiding Russia and China, a senior fellow at RealClearFoundation, Rupert Darwall, says.

Furthermore, the push towards Net Zero is made possible by organizations like the Rockefeller Foundation, many Silicon Valley billionaires, intellectuals, the mainstream media, and the government, Darwall told The Epoch Times and NTD’s Paul Greaney in an interview. In his opinion, environmentalists now make up most of those in power and with money.

In the interview, which aired on NTD’s Fresh Look America on Oct. 12, Darwall said a prime example of environmentalists taking over the Democratic party, and monopolizing the money, is California.

There, billionaire environmentalists have instituted “an aggressive green agenda” that doesn’t negatively impact them but directly opposes the average California voters’ interests, he said.

“Voters, and particularly in the Central Valley, who endure stifling temperatures in summer, had to pay ruthlessly high prices to condition their homes. They don’t have beachfront properties that are cooled from the Pacific.”

Darwall added that because California is “essentially a one-party state,” voters can’t correct the “extreme environmental policies.” Plus, environmentalists use a version of McCarthyism to stifle opposition.

In the 1950s, U.S. Senator Joseph McCarthy accused thousands of innocent people and parties of disloyalty and allowing Communism to influence their lives and policies.

Darwall said environmentalists today use a similar tactic when they label anyone who disagrees with them as a “climate denier.”

“They know ‘denier’ is a very powerful term to be called. You may have seen a New York Times journalist interviewing the president of World Bank, and [the journalist asks] “are you a climate denier?’ It’s designed to chill debate. Not just chill it but prevent people questioning.”

If this progression towards Net Zero continues, Darwall said he knew who will win.

“China and Russia. I mean, basically, the opponents of the West, geopolitically from stepping back, but they’re the big winners from the West deciding to bring itself to its knees. I mean, no modern economy can function without cheap, abundant energy and fossil fuel derived energy.”

“We’re basically cutting off our legs. The pain will increase. People are blaming Putin for the terrible winter the Europeans are going to experience this this year. But the way I would put it is Net Zero is Vladimir Putin’s best ally.”

Darwall further added that not only is the West hurting itself and helping Putin, but it’s also engaging in a sort of “green imperialism.”

As mentioned above, the president of the World Bank had been attacked, specifically by Al Gore, Darwall said, because the World Bank was one of the “big providers of finance to Africa.”

“There are over a billion Africans, and they are energy starved. Africa is an energy-starved continent. And the effect of Western green policies is to freeze, as it were, African Development at a very low level.”

Darwall continued, “Grid-delivered electricity is the doorway to the modern world. If you compare the 19th century to the 20th century, the big change is electricity.

“For Africa to flourish and develop, it needs reliable, cheap, grid-delivered electricity. And that is what people like Al Gore and John Kerry are denying Africans.”

Darwall specified that people like Kerry and Gore are pursuing an agenda that geologically damages the West, its strategic interest, and the economic and social interests of less developed nations.

As a result, Darwall believed a political reckoning is coming to the West. He says that as gas prices and inflation continue to climb, voters will show their displeasure for extreme environmental policies and “vote for the other party.”

That benefits Republicans, as under Donald Trump, the United States was an energy superpower.

“In those four years he was president, America was an energy superpower. And now this energy superpower is going around to the Gulf, begging OPEC plus to increase oil production. It’s absolutely extraordinary.”

As for Europe, Darwall believes significant political changes will likely occur in Britain and other countries, but Germany is fully committed to Net Zero.

When asked what would happen if the West reversed its Net Zero policy and returned to producing oil and gas, Darwall replied, “That’s a catastrophic outcome for Russia. Because Russia is a natural gas oil exporting country and economy, and it really, it needs those foreign currency earnings.

“Its economy depends on it. So, it would be terribly bad. It would be awful for Russia. That’s why I say that Net Zero is Vladimir Putin’s best ally.”