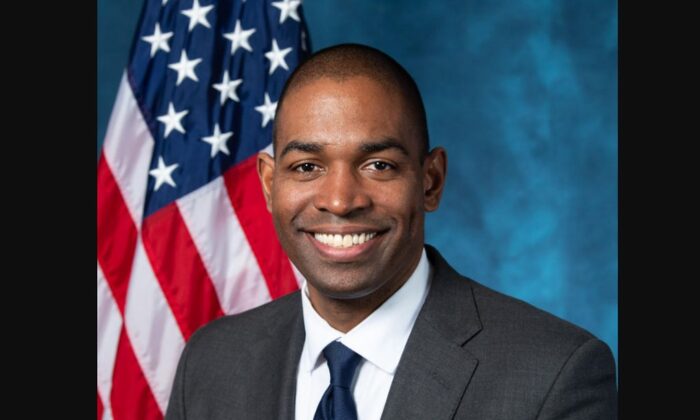 Rep. Antonio Delgado (D-N.Y.) formally gave notice during a brief pro forma session of the House of Representatives that he will resign his office on May 25.

Delgado’s retirement was announced weeks back, when Democratic New York Gov. Kathy Hochul tapped him as her lieutenant governor and running mate in the upcoming gubernatorial election. On May 25, Delgado will be officially sworn into the office.

“I hereby submit my resignation effective May 25, 2022, at 4 p.m. ET as United States representative from the 19th congressional district of New York,” stated the announcement read by the House clerk.

“New York needs an experienced leader with a history of getting things done,” Delgado said in a May 23 tweet. “I am more than ready to step into this role as Lieutenant Governor and work tirelessly, every day, to improve the lives of New Yorkers!”

The relationships he has built up with members of his district, Delgado added, “have served as my source of inspiration in the most challenging of days—and there have been some challenging days.

“Congress often instilled in me awed admiration and profound respect, and yet, being home—in New York—is where I have undoubtedly felt most fulfilled and energized. Connecting with people, working to deliver real solutions in daily life. That’s where I’m most impactful.

“It is with these experiences in mind that I can’t help—I simply cannot help—but welcome with open arms the opportunity to connect with communities all across this amazing state,” he concluded.

In a May 3 Twitter thread, Hochul applauded Delgado’s track record and explained her reasons for nominating the relatively unknown congressman.

“I am proud to announce I am appointing Congressman Antonio Delgado, an outstanding leader and public servant, as Lieutenant Governor of New York,” Hochul wrote. “I look forward to working with him to usher in a new era of fairness, equity, and prosperity for communities across the State.”

“With Antonio Delgado by my side serving as Lieutenant Governor, we will both make history—and make a difference,” Hochul’s thread concluded.

“Having won competitive primary and general elections for Congress, Representative Antonio Delgado is a battle-tested campaigner who has the experience to serve New Yorkers and the work ethic to get our party’s message out to voters, unite communities and lift up Democratic candidates statewide,” Hochul added in a separate statement.

While the move to retire may come as a boon for Delgado’s political aspirations, it comes as another tough blow to Speaker of the House Nancy Pelosi (D-Calif.), whose already thin majority in the House has been drained away by retirements ahead of the 2022 midterms.

At the beginning of April, Rep. Filemon Vela (D-Texas) also stepped down before the end of his term, instead choosing to pursue a career with Aim Gump—the nation’s largest lobbying firm.

Dozens of other Democrats have stuck around to finish their terms, but have also said they will not seek reelection in a midterm season expected to go heavily in Republicans’ favor.

At the time of publication, over 30 Democrats have said that they will not run again in 2022, depriving Democrats of much-needed incumbent advantages. Most prominently, House Budget Chairman John Yarmuth (D-Ky.)—the only Democrat lawmaker sent to Congress by Kentuckians—announced early in the 117th Congress that he would step down at the end of his term.

“Antonio Delgado is the most recent House Democrat to call it quits,” the NRCC wrote. “Delgado is seeking the fastest exit from his doomed reelection bid to join Gov. Kathy Hochul’s corrupt administration.”

NRCC Spokeswoman Samantha Bullock added, “Antonio Delgado was smart and got a jump on the job market before he and the rest of his House Democrat colleagues lose this fall.”