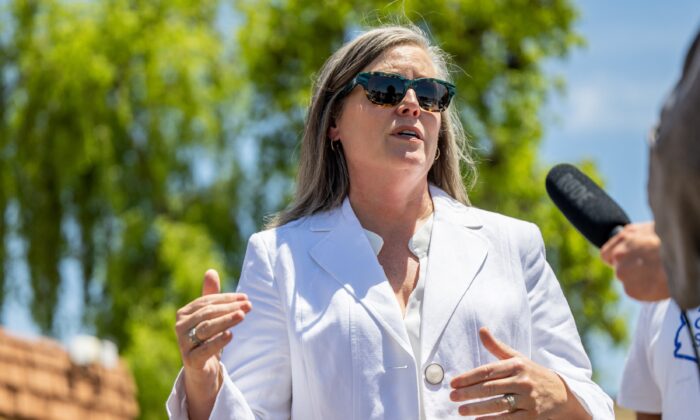 Arizona Secretary of State Katie Hobbs, a Democrat, is officially refusing to participate in an upcoming debate against Kari Lake, who is also vying to be Arizona’s next governor.

Hobbs’ campaign announced the refusal in a Sept. 2 letter to the Citizens Clean Election Commission, which is hosting the Oct. 12 debate.

The refusal stems from displeasure with how the commission ran primary debates. Hobbs’ campaign pointed to news articles that called the GOP primary debate “pure chaos” and having “near-constant interruptions.”

“For weeks, Arizona was ridiculed as clips of the GOP primary debate circulated on social media. As a candidate and as governor, Sec. Hobbs will never participate in something that will make Arizona the butt of late-night TV jokes and national ridicule. She has too much respect for the people of Arizona,” Nicole DeMont, the Hobbs’ campaign manager, wrote to the commission.

The campaign has been trying to work with the commission to figure out an improved format for the general debate but the commission would only agree to one modification, for better enforcement of time limits.

Instead of a debate, the campaign wants each candidate to conduct a 30-minute “town hall-style interview” with Ted Simons, a PBS host who has been a debate moderator.

“Each candidate would have one minute to make opening and closing statements, as in the original proposal. Mr. Simons would then have full license to conduct his interview and ask questions of his choosing,” DeMont said.

The commission, which was established through an act passed by voters in 1998, is aimed at educating voters, making sure candidates don’t have improper funding, and hosting debates.

Lake, a former television anchor who is the GOP nominee for governor, criticized Hobbs.

“Hobbs is so terrified that I might bring up the fact that she is a twice-convicted racist, and that her racism cost Arizona taxpayers nearly $3 million,” Lake said in a video statement.

A jury awarded $2.75 million to a black woman who alleged racial and sex discrimination by Hobbs, who was at the time the Arizona Senate minority leader.

Hobbs has apologized for “the real harm” that she caused the woman and her family.

“I made it unbelievably easy for her,” Lake added. “She picks the date, the time, the moderator. She even had the chance to write all of the questions. But she would rather hide from the voters and let [George] Soros and other dark money groups pour millions of dollars in attack ads against me.”

Liberal billionaire Soros has funded Hobbs in the past.

Arizona’s current governor is Republican Doug Ducey. He is prevented by term limits from running again.

Update: This article has been updated with a comment from the Clean Elections Commission.