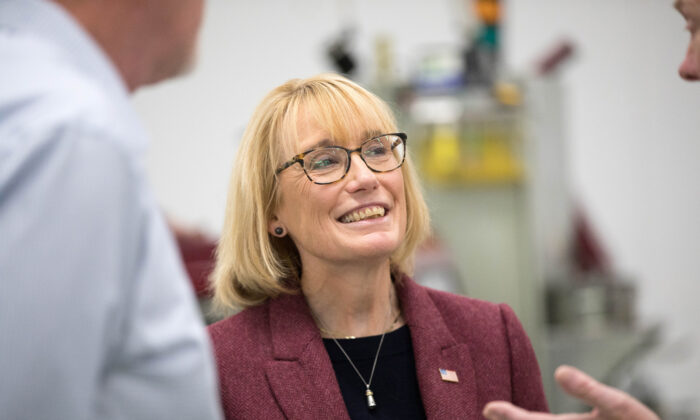 New Hampshire Democrat U.S. Sen. Maggie Hassan has won one of the most heavily watched races in the nation, clinching a comfortable victory over Republican challenger Don Bolduc.

According to the Associated Press, Hassan secured 55.1 percent of the vote,  comfortably beating Bolduc who scored 42.9 percent.

Earlier in the day, those who believed in her chances of beating Bolduc stood for hours holding campaign signs. One of them was Donna McCay, Chairman of the North Hampton Democratic Party. She began at 7:30 a.m. and was still out greeting voters well after dusk just outside North Hampton’s K-8 school, not far from Hassan’s Exeter hometown.

Bolduc, a retired Army Brigadier General, held dozens of town halls as part of his bid for U.S. Senate, while Hassan did very little campaigning.

Various polls showed the race as neck-and-neck in its final weeks. Republicans watched the race intently with high hopes that the political newcomer would add strength to the anticipated red wave to replace veteran Washington Democrats with Republicans.

Hassan’s narrow win harkens back to 2016 when she was elected by a 0.14 percent margin or what represented only 1,014 more votes than her opponent, then-Republican incumbent Kelly Ayotte, also a former state prosecutor.

Hassan is one of several influential female U.S. senators and congresswomen from New England. They include Sens. Jeanne Shaheen (D-N.H.), Elizabeth Warren (D-Mass.), and Rep. Annie Kuster (D-N.H.). They are all Democrats like the group of Washington female lawmakers known as The Squad made up of Reps. Ilhan Omar of Minnesota, Alexandria Ocasio-Cortez of New York, Rashida Tlaib of Michigan, and Ayanna Pressley of Massachusetts.

In her campaign against Bolduc, Hassan deemed him an extremist for saying the 2016 presidential election was stolen. After the overturning of Roe v. Wade, Hassan also labeled Bolduc as a dictator who would use his authority to tell women what they should do with their bodies, based on his staunch anti-abortion views.

Despite Bolduc’s standing as a decorated war veteran, Hassan remained popular among veterans, having sponsored numerous bills aimed at improving health care and benefits for them.

Her ability to pull off a win with relatively little campaigning could at least in part be due to her willingness to step outside party lines. Recently, in a debate with Bolduc, she said that President Joe Biden should answer for the botched withdrawal from Afghanistan. New Hampshire has for a long time had a sizable bloc of registered voters that don’t align with either party. In this election, it was said to be around 41 percent.

A third candidate in the race, libertarian Jeremy Kauffman garnered 2 percent of the votes, which some Republicans feared would tilt the close race in favor of Hassan.