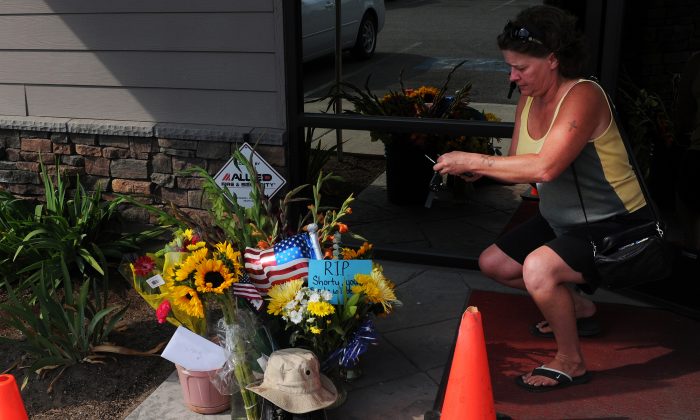 Lill Duncan takes a photo on Aug. 22, 2013, of a memorial for Delbert Belton, an 88-year-old World War II veteran who was beaten to death, in Spokane, Wash. (AP Photo/The Spokesman-Review, Tyler Tjomsland)
US

Delbert Belton, an 88-year-old WWII veteran, was allegedly beaten to death by two teens in Spokane, Wash., on Wednesday night. The beating occurred Wednesday, though he died Thursday in hospital. His death has griped the attention of the nation—a focus spurred in large part by Twitter activists, including actor James Woods, and perpetuated by the trending #DelbertBelton hashtag.

Many comments on Twitter have focused on how this crime might affect racial tensions, as the two teen suspects are African American. Police Chief Frank Straub said the attack appears to be motivated by robbery, though he could not give details on what was taken.

Belton’s neice, Pam Hansen, thinks Belton—who was called “Shorty” by friends, as he was just over 5 feet tall—was targeted for his size and age.

“He was very active and everybody liked him,” she said. “He’d never think about harming another person. … He was defenseless.”

One teen was arrested, and the other suspect is still at large. Police have publicly identified the second suspect, Kenan D. Adams-Kinard, even though he is a juvenile, because he remains a danger to the community.