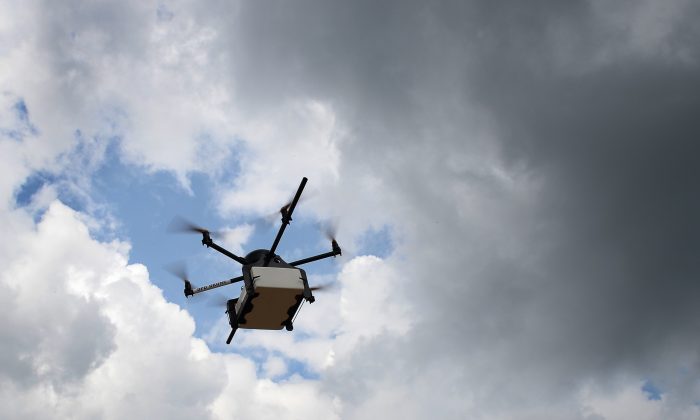 Geopost drone flying in Pourrieres, southeastern France, during a presentation of a prototype of a package delivery drone, on This picture taken on September 28, 2015. (BORIS HORVAT/AFP/Getty Images)
Tech

Defense Department Seeks Drone That Vanishes Without a Trace

The Icarian Sea, located within the Mediterranean, is named after Icarus, who according to Greek mythology fell into the sea after he flew too close to the sun and his wings of wax melted. Icarus is synonymous with over-confidence and recklessness, but occasionally his story is referenced for something more literal.

On Friday, DARPA, the research arm of the Department of Defense, posted a solicitation calling for manufacturers to create a drone that can, like Icarus’s wings, melt away and disappear. The agency has committed $8 million to the ICARUS, or Inbound, Controlled, Air-Releasable, Unrecoverable Systems.

The drone must melt, evaporate, or disintegrate so that the largest remnant is smaller than 100 micrometers in length after just four hours.

ICARUS builds on DARPA’s Vanishing Programmable Resources (VAPR), which seeks to build electronics systems that can vanish on command, which provides a few advantages both in a military and humanitarian context. “Transient” drones prevent military technology from falling into enemy hands, and can’t be used as a clue to track and follow the delivery recipient, which can be critical when supplies are being delivered to snipers or special operations teams.

ICARUS is scheduled to last 26 months, and is divided into two stages. At the end of 14 months, prototypes that aren’t necessarily made of transient material will be tested. At the end of the program, the prototypes are expected to be transient.

The drones sought by DARPA are for delivering small quantities of emergency supplies like medicine and batteries, and have their wingspan capped at 3 meters (about 10 feet). The drones are expected to drop a 3-pound payload from high altitudes.

When DARPA says vanish, they mean it quite literally. The drone must melt, evaporate, or disintegrate so that the largest remnant is smaller than 100 micrometers in length, or 0.0039 inches, after just four hours. Camouflaging the material or allowing it to be removed in other ways is considered a failure under that criterion.

The program provides an exemption for nontransient guidance systems in the drone as long as they’re smaller than a tennis ball, as that component is being developed under VAPR.

Transient electronics is a technology that’s also being researched in medicine, where doctors are looking to create therapeutic and monitoring implants that can dissolve after a period of time.

In the medical implants, the transient components are made up of the same silicon and magnesium found in other electronics, but thin enough that they’ll dissolve in a few days or less when in contact with water and bodily fluids, with their “lifespan” determined by the thickness of protective layers of silk.

Three years ago, researchers at the University of Illinois built “temperature and strain sensors, photo-detectors, solar cells, radio oscillators and antennas, and even simple digital cameras” out of transient material.

FAA App Tells You Where You Can, and Can’t, Fly Your Drone

As a category, transience falls across a spectrum, with transient material being defined as that which disappears too quickly to make a traceable impact. Most of the materials that fall under the nontransient and nonbiodegradable category will disintegrate eventually. John Rogers, a researcher at the University of Illinois who spearheaded the development of transient electronics, told Nature magazine that the average silicon wafer will dissolve after a thousand years.