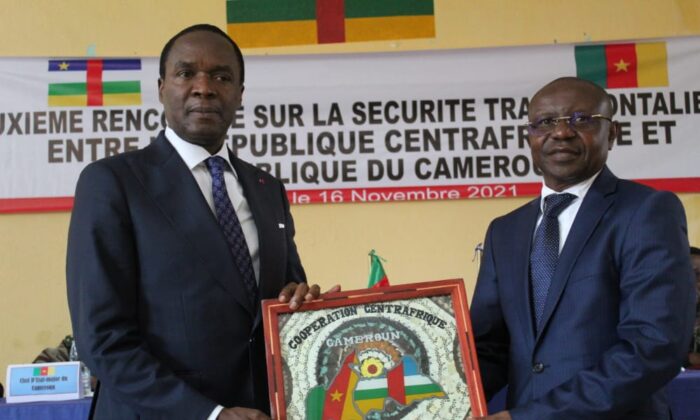 Cameroon and the Central African Republic (CAR) have formed an alliance through their defense ministers to address the major crime hub in the scrubby savannah and semi-tropical border areas between the two African countries.

The large border areas linking Cameroon, the CAR, and Chad are increasingly becoming one of the world’s unknown crime hubs, according to a top conflict resolution expert in Cameroon.

“Armed groups and criminal gangs usually have a free ride along this border,” Emile Sunjo, senior lecturer of international relations and conflict resolution at Cameroon’s University of Buea, told The Epoch Times in an email.

Some observers have called the region “ungoverned territories” or simply the Congo Basin’s “Triangle of Death“—owing to illicit trade and the proliferation of small arms and light weapons.

“The porous and unpoliced nature of the border makes it extremely difficult for any serious attempts to ensure security,” Sunjo said. “The complex nature of the security threats along the border with rebels and armed gangs mingling with refugees and citizens makes it difficult to properly identify the perpetrators of the insecurity.”

Sunjo referred to a cross-border security meeting between the defense ministers of Cameroon and the CAR in the Central African Republic town of Bouar on Nov. 15 and Nov. 16.

Rameaux-Claude Bireau, CAR minister for national defense and army reconstruction, and Joseph Beti Assomo, Cameroon’s minister delegate to the presidency in charge of defense, said in a joint statement that they’ve agreed to “boost exchanges in the areas of training, intelligence, and the fight against cross-border crime and other types of threats.”

But security experts, including Sunjo, have picked holes in their resolve.

“Cameroon and the Central African Republic are doing this in complete isolation of other [regional] member states. It creates the impression of the existence of a sub-group within the sub-regional scheme,” Sunjo told The Epoch Times.

“The main source of insecurity in the Central African Republic and Cameroon, but also in other African countries, is bad governance. If we can for once encourage the putting in place of strong institutions that are responsive to the needs of the citizens, we will then begin to solve the numerous security crises. What is currently being done is simply treating the symptoms and not the root causes of the disease. The root causes lie in the corrupt and weak systems we have maintained since independence.”

Since gaining independence in 1960, the CAR has had a checkered history of coups d’état and has been torn by religious conflicts in the past couple of years.

In 2013, Seleka—a Muslim-dominated coalition of rebel groups from the north, which ousted former President Francois Bozize—became embroiled in a conflict with the “Anti-balaka,” a resistance network of Christian self-defense militia. The aftermath saw armed groups conclude myriad peace agreements, even as they continued to fight each other and launch attacks on the civilian population. The latest agreement, sponsored by the African Union and signed in February 2019 by the government and 14 armed groups, raised hopes for peace.

Cameroon has been struggling since 2013 to push back on the incursions of the Nigerian-based terror group Boko Haram along its northern borders. Adding to that threat, Cameroon has also been battling a separatist revolt in its northwestern and southwestern regions since 2016.

Cameroon and the CAR are thus two bedfellows bound by a common security threat, according to Suh I. Fru Norbert, lecturer in the Department of Political Science and Comparative Politics at the University of Buea.

“Comparatively, [the] Cameroon–Central African Republic land border distance is relatively shorter and from that standpoint, [insecurity] is feasibly controllable,” Norbert told The Epoch Times in a text.

During the recent cross-border security meeting, the defense ministers of Cameroon and the CAR restated their leaders’ resolve to band together and face growing insecurity along their common border.

Close to 300,000 Central African refugees are currently living in Cameroon. In 2017, Cameroon partially closed its border with the CAR due to security concerns. Rebels from the CAR often cross the border and infiltrate into Cameroonian refugee camps—sometimes entering into Cameroon’s hinterland and allegedly obtaining civil status documents and posing as Cameroonians, according to Sunjo.

“This is a significant security threat,” Sunjo told The Epoch Times.

“There are already stories of them engaging in criminal activity in cities like Douala using motorbikes. It is difficult to say exactly what the Cameroon government should do, but for starters, the ease with which these Central African rebels and civilians obtain civil status documents could be checked by enforcing a stricter policy on these.”