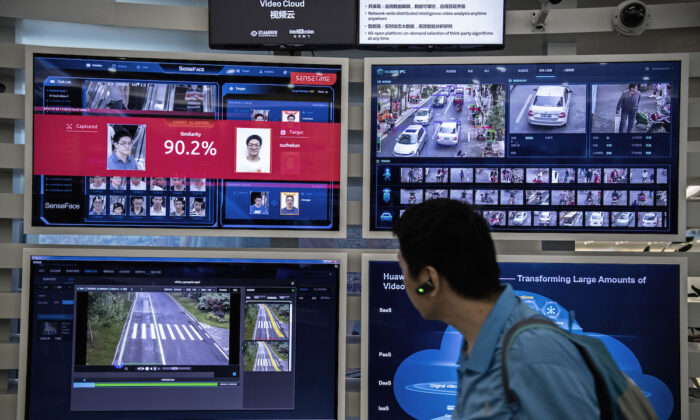 A display for facial recognition and artificial intelligence is seen on monitors at Huawei's Bantian campus on April 26, 2019, in Shenzhen, China. (Kevin Frayer/Getty Images)
US-China Relations

Decoupling From China’s Economy ‘Is the Future’: Analyst

Andrew Thornebrooke
Reporter
Andrew Thornebrooke is a reporter for The Epoch Times covering China-related issues with a focus on defense, military affairs, and national security. He holds a master's in military history from Norwich University.
View profile
Follow
and Gary Bai

U.S. political leadership must work with the private sector to decouple critical technology development from mainland China, according to one expert.

“One of the key vulnerabilities that we’re becoming more and more aware of is the degree to which Wall Street firms and American banks and investment companies continue to see China as this great market or this great investment opportunity,” Arthur Herman, a senior fellow at the Hudson Institute, a Washington-based think tank, told EpochTV’s “Forbidden News.”

“Decoupling from China is the future, and we need to establish timelines by which that is possible. We need to explain that both to private companies like Apple, for example, but also to Wall Street.”

Hawkish lawmakers and strategists have increasingly called for decoupling from communist China, wherein U.S. economic and research interests would be severed entirely from the nation. Such action is necessary to prevent the use of U.S. research and finances from fueling the continued exportation of the Chinese Communist Party’s authoritarianism, they say.

Achieving that decoupling would require a great amount of untangling with regard to U.S. supply lines, however, and Herman believes that political leadership should immediately begin working with the private sector to make that happen.

“How do we distance ourselves from dependence upon supply chains, manufacturing facilities, and investment in American industry and companies?” Herman asked. “How do we divest ourselves from those kinds of connections, in order to both build our modern high-tech arsenal so that it’s safe and secure and reliable in our hands?”

With that in mind, large U.S. tech corporations and investment firms have continued to invest heavily in China, regardless of the regime’s use of forced labor and its policy of co-opting private data for military purposes.

Nevertheless, Herman believes that U.S. corporations will ultimately work for America’s benefit if political leadership works to explain the severity of the situation to them.

“Then I think companies and executives will come around and realize that they have a hugely important role to play in the development of the future arsenal of democracies and in advancing high tech so it benefits everyone.”

That new “arsenal of democracies,” a play on the phrase originating from U.S. World War II-era industrial dominance, is a reference to Herman’s belief that the United States needs to lead the Western world in becoming the globe’s preeminent creator of next-generation technologies, such as quantum computing devices.

Whoever guides the emergence of such a technology will likely also guide the future shape of the international order.

“In quantum computing, the United States still enjoys a lead, I would even say a comfortable lead because we’ve got major companies like IBM and Microsoft and Intel and Google pursuing that avenue in the development of quantum technology,” Herman said. “And although the Chinese are sprinting fast to catch up, they just don’t have right now the kind of spread of private initiative and know-how that the United States is able to enjoy in that area.

“In the area of quantum communications, however, I have to say the United States lags behind and the Chinese have understood the strategic as well as the technological significance of having instantaneous hackproof networks as a way in which to protect data and networks.”

Herman noted that China launched the world’s first quantum communications satellite in 2016 and that its efforts to gain dominance in that field were tied directly to its ambitions for global hegemony.

Still, there’s a deeper problem at work, which drives Herman and others to push for decoupling from China’s communist regime. That’s the fact that U.S. companies are supercharging the regime through their work in mainland China.

This is because Chinese security laws dictate that any data gathered or stored within its borders must be offered to Chinese authorities if it’s considered a matter of national security. Moreover, the regime’s policy of dual-use, wherein every civilian technology is expected to also serve a military function, means that even the most rudimentary technologies created there could unexpectedly wind up in a military role.

One example of this was a touch screen developed by Google, which was subsequently proposed to be used to improve the targeting screens of Chinese fighter jets.

“What we’ve seen is the unfortunate result of that [corporate] mentality has been that many of our best and brightest technology companies have been very willing to work with China on these technologies,” Herman said.

“We’ve seen [companies] also work with [China] on technology, scientific, and research and development projects in ways that don’t take into account the degree to which China wants to achieve with these technologies. And what the United States and these companies themselves want to achieve are two completely different and even contradictory things.”

To that end, he said, U.S. political leadership needs to promote a change of consciousness in the U.S. business class and encourage a proactive understanding of national security in product development.

Therefore, he said, if the United States were to succeed in developing a 21st-century arsenal of democracies and lead the West in the development of advanced technologies, it would have to effectively tap into the private sector and integrate it with national security priorities.

Then, Herman hoped, a more free and just international order could be secured.

“The arsenal of democracies for the 21st century, I think, can stand as a landmark event, both in the history of the United States, but also in the history of freedom and its endless struggle against tyranny and totalitarianism.”