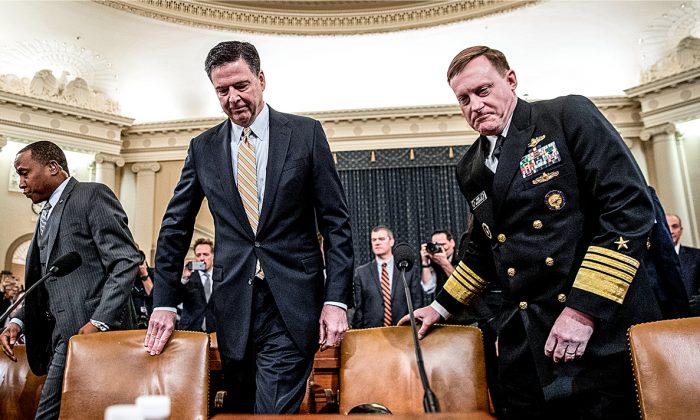 Former Director of the FBI James Comey (2nd L) and Director of the NSA Michael Rogers on Capitol Hill on May 20. A FISA Court report details how communications of Americans were unlawfully monitored by U.S. spy agencies, and that some of the communications were passed to contractors by the FBI. (DREW ANGERER/GETTY IMAGES)
US News

A recently declassified, top secret court report shows that the Obama administration monitored the communications of American citizens. The report says the administration concealed its abuses, violated the Constitution, and illegally shared this spy data.

The 99-page report was released by the U.S. Foreign Intelligence Surveillance Court (FISA Court), which oversees requests for surveillance warrants. The report’s contents were filed on Sept. 26, 2016, and March 30, 2017. It was marked top secret, but was declassified on April 26.

“This is a very serious Fourth Amendment issue,” the report states, and notes the Obama administration’s surveillance activities using the National Security Agency (NSA), and its failures to disclose such information previously, showed “an institutional ‘lack of candor.'”

The Obama administration had been carrying out this unlawful surveillance for years and heavily increased the scale of its surveillance in 2016.

“This is the sort of thing that would make Richard Nixon blush,” said Chris Farrell, director of investigations at the conservative watchdog group Judicial Watch, in a recent video. He added, “President Obama … has abused and misused the National Security Agency in a way that no one ever even pondered before.”

He said, “This is an abuse of the Constitution and an illegal act that has no parallel, no par, in American history.”

The Obama administration only disclosed its abuses to the FISA Court on Oct. 24, 2016, two weeks before Donald Trump was elected. The court then learned about the administration’s “non-compliance” on procedures for NSA surveillance regarding searching for personal information on Americans.

The report notes, “The full scope of non-compliant querying practices had not been previously disclosed to the Court,” and it details the process of uncovering how deep the unlawful surveillance went.

In a friend-of-the-court brief submitted to the FISA Court, Richard Hutchison of the Landmark Legal Foundation called for the court to “to exercise its authority” to consider “exceptional matters,” and issue orders to “protect the administration of justice, including an order to direct a full investigation into the leaking of surveillance activity,” based on the findings outlined in the report from the FISA Court.

The brief states that according to media reports, “during the last year of the prior administration, law enforcement and intelligence officials sought, and eventually obtained, authorization from this Court to eavesdrop on then or former Trump campaign officials; continued monitoring the individuals even when no evidence of wrongdoing was said to have been found; then relaxed the NSA rules to allow evidence to be shared widely within the government.”

It states the administration then “rushed to collect and then distribute intelligence information collected to numerous federal agencies, increasing the likelihood that certain information, including the identities and conversations of private U.S. citizens, might be leaked to the media.”

Close to 1 in every 20 of the NSA’s searches through upstream internet data was targeting Americans, according to reports by John Solomon and Sara Carter for Circa. The writers also received internal, classified reports relating to the issue.

The searches for data on Americans violates U.S. surveillance laws, according to the FISA report.

“Upstream” collection refers to data intercepted by the NSA as it is being transmitted through data routes between computer networks. The FISA report states that close to 9 percent of the NSA’s “internet collection” is from upstream data.

The searches for data on Americans violates U.S. surveillance laws, according to the FISA report. Under U.S. law, it says, the NSA can only target people “reasonably believed to be located outside the United States,” and it must “prevent the intentional acquisition of any communication as to which the sender and all intended recipients are known at the time of the acquisition to be located in the United States.”

In other words, the NSA is not allowed to intentionally spy on Americans; and even when searching for data in other countries, it is not permitted to knowingly use keywords that will reveal data on Americans.

The report states, “The Oct. 26, 2016 notice informed the court that NSA analysts had been conducting such queries in violation of that prohibition, with much greater frequency than had previously been disclosed in the court.”

The NSA is not allowed to intentionally spy on Americans.

After some investigation, it states, “the problem was widespread during all periods under review.”

The court then expanded its investigation to include other time periods and found the violations had been ongoing. It notes that the violations were not caused by computer errors and that searching on some of these databases requires analysts to “opt-out” of Section 702 surveillance authorities when searching through upstream internet data.

Section 702 is part of the Foreign Intelligence Surveillance Act, which, according to an NSA fact sheet, outlines “procedures for targeting certain persons outside the United States other than United States persons.” The procedures are in place to avoid illegal surveillance of U.S. persons.

The FBI disseminated raw information received from the surveillance documents, according to the FISA report.

It states “the FBI had disclosed raw FISA information, including but not limited to Section 702-acquired information,” and notes this was discovered in a Department of Justice oversight review on March 9, 2016.

The section on the FBI on page 83 of the 99-page report is heavily redacted. If the FBI received Section 702 information, this suggests the information was on U.S. citizens and intercepted by the NSA from foreign communications. Being “raw” data, it could have unlawfully revealed the names of the U.S. citizens.

The fact that the FBI spread the reports correlates with accusations from President Donald Trump that intelligence agencies had illegally spied on members of his team, then illegally spread these reports with the names revealed.

It adds that certain contractors “had access to raw FISA information on FBI storage systems” and that this “went well beyond what was necessary to respond to the FBI’s request.”

It notes that the Obama administration “has not explained” how its providing of raw information to the FBI contractors was not a violation. It states the FISA Court is “nonetheless concerned about the FBI’s apparent disregard” for these rules and “whether the FBI may be engaged in similar disclosures of raw Section 702 information that have not been reported.”

The illegal surveillance is part of a broader system of abuse. Farrell noted the Obama administration mobilized other government branches for political motives, such as using the IRS to suppress political rivals and similarly politicizing the Justice Department and other government bodies.

The findings also support allegations that the Obama administration was illegally spying on the Trump team and U.S. government officials.

The findings also support allegations that the Obama administration was illegally spying on the Trump team and U.S. government officials.

And it corroborates similar claims that have been lodged against the NSA and other U.S. intelligence agencies.

Dennis Montgomery, a former contractor for the NSA and CIA, left his post with 47 hard drives and more than 600 million pages of information, which he claimed exposed illegal surveillance of judges, politicians, and nearly anyone of power in the United States.

After receiving immunity, Montgomery turned this information over to the FBI more than two years ago, with the help of Larry Klayman, founder of Freedom Watch, a conservative political advocacy group.

Klayman said in a recent interview on the Chicago-based “Franklin Raff Show” that the information showed “everyone from the Chief Justice of the Supreme Court, to other Justices, to hundreds of judges, to Donald Trump, to me—anybody who was anybody—was subject to this government surveillance by the intelligence agencies, the NSA, and CIA.”

After turning the evidence over to the FBI, under then-Director James Comey, Montgomery testified on his claims under oath, and “Comey sat on this for over two years, he buried this investigation of perhaps the biggest scandal in American history,” Klayman said.

Montgomery had claimed previously that the surveillance he played a direct part in under the NSA and FBI included monitoring 17 of Trump’s businesses, including the Trump Tower, Trump’s family members, and even Trump himself.

The illegal surveillance of Americans may confer political power on unelected bureaucrats.

Klayman noted that by spying on U.S. officials, judges, and businessmen, the intelligence agencies under Obama could have been collecting data that could be used for blackmail. He alleged that in his own attempts to alert lawmakers, he found politicians didn’t want to go after intelligence agencies, since the agencies have access to information on everybody. Through this, he said, “the agencies own them.”

“The intelligence agencies now, the people that run it, are more powerful than the president of the United States,” he said. “They can make or break people at any time.”

Similar claims have been raised about the intelligence agencies and the so-called “deep state” of powerful unelected elites, particularly regarding the stream of leaks to the press used to smear the Trump presidency.

CNN reporter Dana Bash discussed the deep state’s leaks against Trump in a May 16 video, stating, “What this president has done—his first 100-plus days, even before he came into office—is pick fights with the intelligence community and now the law enforcement community.”

Bash added, “So we know that they talk about the deep state; well, these are communities that have a lot of loyalty within, and know how to get back, even if you’re the president of the United States.”