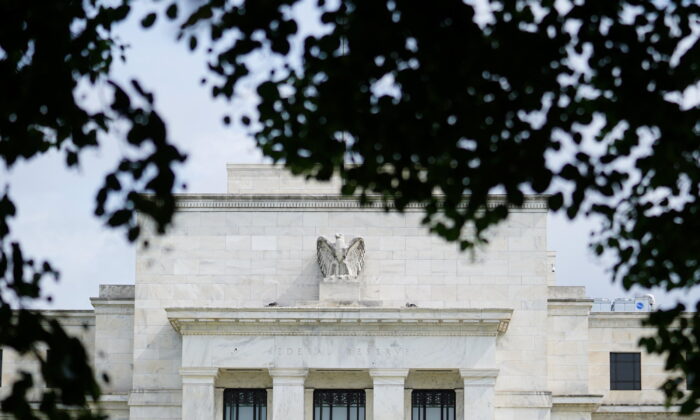 The exterior of the Marriner S. Eccles Federal Reserve Board Building is seen in Washington, D.C., on June 14, 2022. (Sarah Silbiger/Reuters)
Business Columnists

Debt—and Why the Fed Is Trapped

The massive debt levels provide the single most significant risk and challenge to the Federal Reserve. It is also why the Fed is desperate to return inflation to low levels, even if it means weaker economic growth. Such was a point previously made by Jerome Powell:

“We need to act now, forthrightly, strongly as we have been doing. It is very important that inflation expectations remain anchored. What we hope to achieve is a period of growth below trend.”

That last sentence is the most important.

There are some important financial implications to below-trend economic growth. As we discussed in “The Coming Reversion to the Mean of Economic Growth”:

“After the financial crisis [of 2008–09], the media buzzword became the ‘new normal’ for what the post-crisis economy would be like. It was a period of slower economic growth, weaker wages, and a decade of monetary interventions to keep the economy from slipping back into a recession.

“Post the ‘COVID crisis,’ we will begin to discuss the ‘new new normal’ of continued stagnant wage growth, a weaker economy, and an ever-widening wealth gap. Social unrest is a direct byproduct of this ‘new new normal,’ as injustices between the rich and poor become increasingly evident.

“If we are correct in assuming that PCE [Personal Consumption Expenditures price index] will revert to the mean as stimulus fades from the economy, then the ‘new new normal’ of economic growth will be a new lower trend that fails to create widespread prosperity.”

As shown, economic growth trends are already falling short of both previous long-term growth trends. The Federal Reserve is now talking about slowing economic activity further in its inflation fight.

The reason that slowing economic growth, and debilitating inflation, is critical for the Fed due to the massive amount of leverage in the economy. If inflation remains high, interest rates will adjust, triggering a debt crisis as servicing requirements increase and defaults rise. Historically, such events led to a recession at best and a financial crisis at worst.

The problem for the Fed is trying to “avoid” a recession while trying to kill inflation.

Recessions Are an Important Part of the Cycle

Recessions are not a bad thing. They are a necessary part of the economic cycle and arguably a crucial one. Recessions remove the “excesses” built up during the expansion and “reset” the table for the next leg of economic growth. Without “recessions,” the build-up of excesses continues until something breaks.

In the current cycle, the Fed’s interventions and maintenance of low rates for more than a decade allowed fundamentally weak companies to stay in business by taking on cheap debt for unproductive purposes, such as stock buybacks and dividends. Consumers have used low rates to expand consumption by taking on debt. The federal government increased debts and deficits to record levels.

The assumption is that increased debt is not problematic as long as interest rates remain low. But therein lies the trap the Fed faces.

The Fed’s mentality of constant growth, with no tolerance for recession, has allowed this situation to inflate rather than allowing the natural order of the economy to perform its Darwinian function of “weeding out the weak.”

The chart below shows total economic system leverage versus gross domestic product (GDP). It currently requires $4.82 of debt for each dollar of inflation-adjusted economic growth.

Over the past few decades, the system has not been allowed to reset. That has led to a resultant increase in debt to the point that it impaired the economy’s growth. It is more than a coincidence that the Fed’s “not-so invisible hand” has left fingerprints on previous financial unravellings. Given that credit-related events tend to manifest from corporate debt, we can see the evidence below.

Given the years of ultra-accommodative policies following the financial crisis of 2008–09, most of the ability to “pull forward” consumption appears to have run its course. This is an issue that can’t, and won’t be, fixed by simply issuing more debt, which, for the last 40 years, has been the preferred remedy of each administration. In reality, most of the aggregate growth in the economy was financed by deficit spending, credit creation, and a reduction in savings.

In turn, this surge in debt reduced both productive investments and the output from the economy. As the economy slowed and wages fell, the consumer took on more leverage, decreasing the savings rate. As a result of the increased leverage, more of consumers’ income was needed to service the debt.

A Long History of Terrible Outcomes

After three decades of surging debt against falling inflation and interest rates, the Fed now faces its most difficult position since the late 1970s.

The U.S. economy is more heavily levered today than at any other point in our history. Since 1980, debt levels have continued to increase to fill the income gap. Bigger houses, televisions, computers, etc., all required cheaper debt to finance it.

The chart below shows the inflation-adjusted median living standard and the difference between real disposable incomes (DPI) and the required debt to support it. Beginning in 1990, the gap between DPI and the cost of living went negative, leading to a surge in debt usage. In 2009, DPI alone could no longer support living standards without using debt. Today, it requires almost $7,000 a year in debt to maintain the current standard of living.

The rise and fall of stock prices have little to do with the average American and their participation in the domestic economy. Interest rates are an entirely different matter. Since interest rates affect “payments,” increases in rates quickly negatively affect consumption, housing, and investment, which ultimately deters economic growth.

Since 1980, every time the Fed tightened monetary policy by hiking rates, inflation remained “well contained.” The chart below shows the federal funds rate compared to the Consumer Price Index (CPI) as a proxy for inflation. The current bout of inflation is entirely different, and as the Fed hikes interest rates to slow economic demand, it is highly probable that it will over-tighten. History is replete with previous failed attempts that created economic shocks.

The Fed has a tough challenge ahead of it, with very few options. While increasing interest rates may not “initially” affect asset prices or the economy, it is a far different story to suggest that they won’t. There have been absolutely zero times in history the Federal Reserve began an interest rate-hiking campaign that did not eventually lead to a negative outcome.

The Fed is now beginning to reduce accommodation at precisely the wrong time. To the point:

Such are the essential ingredients required for the next “financial event.”

When will that be? We don’t know.

We do think, however, that the Fed will make a policy mistake as “this time is different.”

Unfortunately, the outcome likely won’t be.