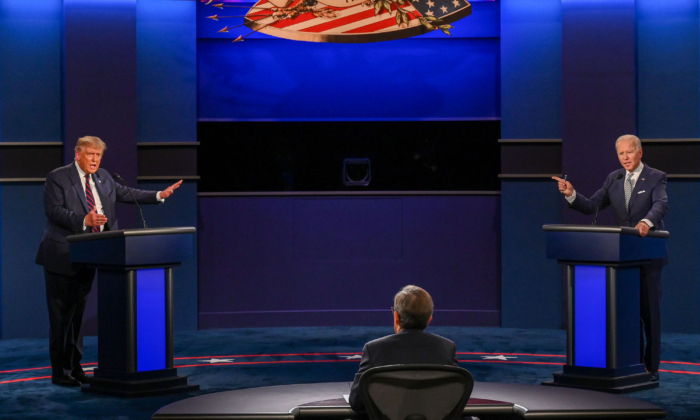 President Donald Trump and former Vice President Joe Biden squared off in a contentious debate on a range of issues, including the COVID-19 pandemic, riots, unemployment, the Supreme Court, and mail-in ballots.

During the debate, both candidates sharply attacked one another, with Trump attempting to tie Biden to the “radical left” wing of his party and frequently noting that the former vice president is a career politician with a 47-year career.

But the event was punctuated by interruptions and talking over one another. Fox News’ Chris Wallace, who moderated the debate, also frequently sparred with the president over his responses.

“Would you shut up, man?” Biden said to Trump at one point, calling him “unpresidential.” Later on, he cut Trump off again and said, “Will he just shush for a minute?”

Biden graduated “either the lowest or almost the lowest in your class,” Trump said after Biden remarked that said the president should become “smart” with the COVID-19 pandemic.

Biden attacked Trump’s handling of the CCP virus pandemic, saying the president “waited and waited” to act when the CCP virus spread in the United States. Biden then said Trump should “get out of your bunker and get out of the sand trap and go your golf course to the Oval Office” to come up with a bipartisan plan to save people.

“I’ll tell you Joe, you could never have done the job that we did. You don’t have it in your blood,” Trump said in response.

Later, Biden criticized how the economy is performing under the Trump administration.

Trump also criticized Biden’s refusal to comment on whether he would attempt to expand the Supreme Court to have more justices if Amy Coney Barrett is confirmed to the Supreme Court following former Justice Ruth Bader Ginsburg’s death.

When the debate moved on to race relations, Biden alleged that Trump is trying to use “everything as a dog whistle to try to generate racist hatred, racist division.”

Trump then asserted that Biden’s work on a federal crime bill in 1994 treated black people “about as bad as anybody in this country.” And later he said that riot-hit cities like Minneapolis are back under control but in other places such as Portland, Democrats refused to allow federal agents there.

“We believe in law and order, you don’t,” Trump said, adding that Democratic-run cities are run by radical leftists “and they’ve got you wrapped around their finger, Joe.”

He then pointed to Democratic-run cities such as New York City and Chicago seeing a spike in crime, murders, and shootings, adding that Biden would destroy the suburbs if he was elected.

“He wouldn’t recognize a suburb unless he took a wrong turn,” Biden said, while again accusing Trump of using racist terminology.

Biden responded by that most law enforcement officers are “good people” but there are “bad apples and … they have to be sorted out.”

“China ate your lunch,” Trump said, saying that Biden’s son had questionable business practices in China and Russia while Biden was the vice president.

A report from the Republican-controlled Senate Homeland Security Committee detailed Hunter Biden’s business ties in China and his position while he sat on the board of Ukrainian gas firm Burisma Holdings, which has long been accused of corruption.

Biden told Trump that the claims were “totally discredited.”

“My son did nothing wrong with Burisma,” Biden added, claiming that Trump’s position has been “discredited by everyone.”