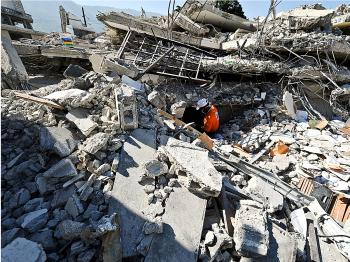 RESCUE: A rescue worker searches for survivors among the ruins of a collapsed building in Port-au-Prince on Jan. 18. (Jewel Samad/AFP/Getty Images)
International

Jasper Fakkert
Editor-in-Chief, U.S. Editions
Jasper Fakkert is the Editor-in-chief of the U.S. editions of The Epoch Times. He holds a Bachelor's degree in Communication Science and a Master's degree in Journalism.
View profile
Follow
biggersmaller
Print
Six days following the disastrous earthquake which hit Haiti, the death toll is estimated to be up to 200,000. Few survivors have been recovered from the rubble and aid efforts are still struggling to reach those in need.

"The further away we get from the event, the more difficult and challenging it is to find people alive," said Tim Callaghan, senior regional adviser for USAID during a press briefing. "Obviously the government of Haiti will determine when the recovery phase ends.”

According to the U.N., 3 million people are in need of food, water, shelter, and medical assistance. So far only 250,000 ready-to-eat food rations have been distributed.

The World Food Program has appealed to leaders around the world to donate 100 million ready-to-eat meals.

Haiti's already poor health and infrastructure situation, such as a lack of water, and sanitation systems, has brought additional challenges to the rescue operations in the Western Hemisphere’s poorest nation.

“We are seeing the difficulties that arise when disaster strikes an already disastrous public health situation," said Margaret Chan, director-general of the World Health Organization in a press release.

The damage done to the main port of the country as a result of the earthquake, as well as the main roads and airport, have limited the distribution of aid.

"The aid is coming in—we're getting it out—there's just not enough of it yet,” said secretary of state, Hillary Clinton, in an interview with NBC on Monday. “Because we don't yet have the distribution networks, nor do we have the port open so everything you see is either coming in by air and the airport has one runway."

According to Col. Buck Elton, commander of special operations command Haiti, so far there have been 600 takeoffs and landings at the airport. Immediately after the earthquake the airport had no electricity, no communications, and no support.

On Monday the daily capacity was increased to 100 aircraft per day. Around 1,760 American citizens have been airlifted out of Haiti in airplanes leaving the country.

The main port of Port International de Port-au-Prince is expected to be back in use in two to three days.

Besides air, supplies have arrived by road from neighboring Dominican Republic, which has served as an aid corridor.

Reports of looting, violence, and lawlessness on the streets of Haiti's capital Port-au-Prince continue as desperation for food and water among the population grows.

"There are some—I have heard of some sporadic sort of situations, security situations, and we're obviously monitoring that very closely, working with our military colleagues," said Callaghan.

U.N. Secretary-General Ban Ki-moon called on Monday for an additional 1,500 police officers and 2,000 troops to be deployed in Haiti to reinforce the 9.000 strong U.N. peacekeeping forces already present in Haiti.

Security forces have been deployed to escort humanitarian convoys between Port-au-Prince and the Dominican Republic and the northern ports of Haiti as well as preventative measures for a deteriorating security situation.

Leogane was close to the epicenter of the earthquake that struck the island on Jan. 12, and about 37 miles from Port-au-Prince. Around 80 percent to 90 percent of the buildings are reported to be damaged according to a U.N., EU, and World Food Program joint assessment.

After searching for survivors among the collapsed buildings in the capital, teams from the U.K., Qatar, and Iceland were among the first to arrive in Leogane in search of survivors.