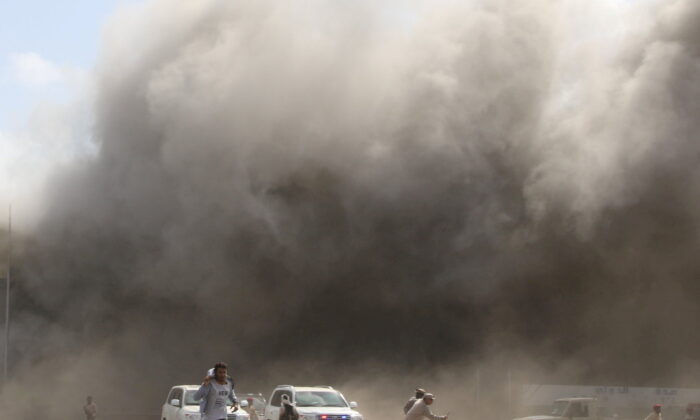 The war in Yemen will have cost roughly 377,000 lives by the end of 2021, with the vast majority of the casualties being children, according to a new report from the U.N. Development Programme (UNDP).

The Nov. 23 UNDP report comes as a coalition of lawmakers led by Sen. Rand Paul (R-Ky.) moves to block the sale of about $650 million in arms to Saudi Arabia. The war in Yemen has been described as a proxy fight between the Iranian-backed Houthis and a Saudi-supported coalition of Arabs.

The report states that this conflict will have caused approximately 377,000 deaths by the end of 2021—up from an estimated 233,000 deaths as of 2019. It cites the Armed Conflict Location and Event Data Project, which compiles its figures by combing through hundreds of local media reports and other sources.

“These deaths are overwhelmingly made up of young children who are especially vulnerable to under and malnutrition,” the report reads. “In 2021, a Yemeni child under the age of 5 dies every nine minutes because of the conflict.”

According to the report, nearly 60 percent of the deaths are due to issues associated with lack of access to food, water, and health care. The Saudis have blockaded Yemen since 2015 in an attempt to deprive the Houthis of resources.

Earlier in November, the Biden administration approved the sale of $650 million in arms to the Saudis, including 280 air-to-air missiles and 596 missile launchers, as well as other weapons and associated training and support. The administration stated that the sale is for defensive weaponry, but others have suggested that the weapons can be used to support the Saudis’ starvation-inducing blockade of Yemen.

Supporters of continued U.S. support for the Saudis say that it’s necessary to counter Iranian influence in the region. The Obama administration reportedly began supporting Saudi Arabia in the war in 2015 to “placate the Saudis” over the Iran deal being negotiated at the time.

However, critics say that the war has been long, bloody, and indeterminate. Paul introduced a joint resolution in the Senate to block the sale on Nov. 18, calling for an end to U.S. support for the war.

“A message needs to be sent to Saudi Arabia that we don’t approve of their war with Yemen,” Paul said when announcing the resolution. “By participating in this sale, we would not only be rewarding reprehensible behavior, but also exacerbating a humanitarian crisis in Yemen.”

“The war in Yemen is a humanitarian tragedy, and U.S. participation in this war remains undeclared by Congress,” Lee said on Nov. 18.

Lawmakers are also considering a provision in the 2022 National Defense Authorization Act (NDAA) that would end U.S. support for the Saudi Arabia-led coalition in the Yemen conflict. The House has approved this provision, and the NDAA is currently being considered by the Senate.

The drive to end U.S. involvement in the Yemen war has largely been steered by Democrats, with only 11 Republicans backing the House NDAA provision.