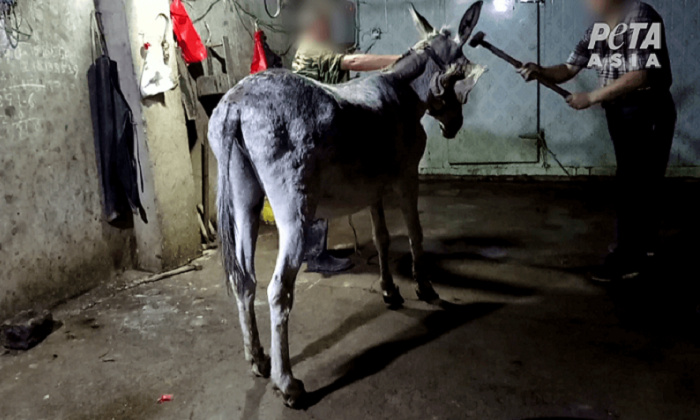 A still image from the video showing workers killing a donkey for its skin in China. (Photo from People for the Ethical Treatment of Animals)
China

Graphic video footage of donkeys being slaughtered in China released by an animal rights group has further exposed the effects of the country’s booming demand for a traditional medicine called ejiao.

The video, released by People for the Ethical Treatment of Animals (PETA), shows donkeys being bludgeoned with a sledgehammer before having their throats cut.

“Donkeys as young as 5 months old have been bashed in the head and left to endure a slow, agonizing death, all for an ingredient,” said PETA President Ingrid Newkirk via statement which likewise condemned the overall treatment mete out to the animals before their slaughter.

The ingredient that Newkirk was referring to is ejiao which is derived from boiling down donkey skins. Today, the gelatin product has become a popular cure-all amongst the rapidly expanding middle-class Chinese and can also be found in beauty products, food and beverages.

PETA said with ejiao demand being so high, other animals such as horses, pigs, and cows are now being used to create a fake version of the product.

To watch the PETA Asia video expose click here. But be warned, it is graphic.

But the release of the animal rights group’s video comes at a time of growing concern from abroad about China’s demand for donkey skins.

UK charity Donkey Sanctuary said in a report published earlier this year that “there used to be around 11 million donkeys in China but the number has dropped to 6 million in the last 20 years.”

The charity said what is occurring is unsustainable and has global consequences with China sourcing donkey skins from other Asian nations, the Middle East, Africa, and South America.

“What was once exclusive to ancient emperors has now become a luxury 21st-century product, promoted, sold and delivered on a global scale,” said Donkey Sanctuary’s report.

“As a consequence, between four and ten million donkeys will need to die every year in order to meet the demand for ejiao – a demand that is unsustainable, whilst simultaneously causing mass-scale suffering to donkeys and risking the livelihoods of millions of people who depend on them,” said the report.

The report that said global supply has struggled to keep up with China’s demands, leading to high prices and widespread claims of fraud.

“Such high levels of demand by the Chinese market are undoubtedly fueling global reports of poor donkey welfare, theft and a sudden increase in the purchase price of donkeys,” said the report.

We have released a global survey to help map the devastating trade in donkey skins – can you help? >> https://t.co/gtAi5W42nm pic.twitter.com/e0iKxWESKm

The extent of Chinese demand for donkey has upset local rural economies in many developing nations. In response, nine African nations have banned donkey skin exports.

Due to Chinese buyers, the cost of a donkey in Kenya has trebled in the past year, reported The Guardian as one example of the impact of China’s demand.

Some countries have closed down Chinese-funded slaughterhouses but unregulated “bush slaughter” facilities have been multiplying across Africa, Asia and South America, reported the British broadsheet.

“These issues can’t be ignored – the donkeys’ welfare and their real value supporting people’s livelihoods is at risk,” concluded the Donkey Sanctuary’s report.