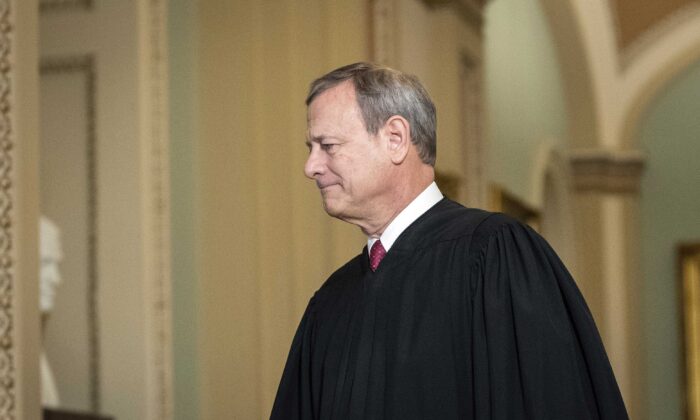 Chief Justice John Roberts is said to see defending the Supreme Court as an institution as pivotal to his role on it.

On its face then, the court’s silence some two months after Roberts announced an investigation into what he termed an “egregious breach”—the assault on the institution of the court that was the leak of the draft Dobbs opinion that would prevail, returning the question of abortion to its rightful place within the states—is itself an egregious breach.

As The Associated Press recently reported, the court is at present mum on whether it’s still even investigating the leak, as well as on a host of other basic questions about the probe.

There were already glaring outstanding questions regarding those few elements of the investigation to which we were privy.

For example, we don’t know why the marshal of the Supreme Court was particularly well-equipped to lead it, nor the resources the marshal was bringing to bear.

We don’t know what the probe entails, or entailed, beyond the fact perhaps that rankled staff at the court leaked that it was asking of clerks that they provide cell phone records and sign affidavits in connection with it, and that reportedly the marshal obtained electronic devices “from some permanent employees who work closely with the justices.”

We do not know whether the court will publicly announce the findings of its investigation in whole or part—starting with who the leaker was—nor the punishment the leaker will face, and the steps the court will take to ensure such a leak never happens again.

Now, the universe of people who could have obtained and leaked the opinion—the leaker described as “a person familiar with the court’s proceedings” in the Dobbs case—is small.

If the court does not by now know who leaked the opinion, it would seem to constitute a breathtaking display of incompetence.

If the court does know who leaked the opinion, yet for whatever reason is sitting on its findings, it would seem to constitute a breathtaking display of politics.

That’s because, on the merits, the silence is indefensible.

What could be of greater import to the institution’s integrity and credibility than to demonstrate that it will stop at nothing to, and with great haste, find and bring to justice an individual who would so grievously undermine the court’s ability to do its most basic duty: deliberate, discreetly and insulated from political pressure and intimidation.

Silence on the leak probe only compounds the error of not ruling expeditiously in the wake of the leak, which fueled what else but a campaign of political pressure and intimidation up to and including threats to the life and limb of the judges.

Does the chief justice, so attuned to public opinion about the court, think the probe can be cast as some kind of internal matter to be handled privately, and made to fade into the ether?

Do the findings implicate one or several justices, and as such, is the chief justice unsure how to proceed with the public?

The longer he remains silent, the greater the speculation will grow. Surely the chief justice does not think promoting such speculation is in the interest of the Court as an institution.

Or could it be that the Roberts court’s silence is representative of the fact that the chief justice’s understanding of protecting the Supreme Court as an institution differs from ours?

Roberts’s past attempts to protect the court as an institution can be seen in his rewriting of Obamacare as a tax, lest President Barack Obama’s signature achievement be properly rendered unconstitutional; his failed attempt to split the baby in issuing a similarly tortured Dobbs concurrence, while also failing to flip Justice Brett Kavanaugh toward his position and away from that of Justice Samuel Alito; and in the overarching “incrementalist” approach reflected in many of his rulings, whereby Roberts eschews hewing to the law if, in his view, the results would be too practically jarring, or not deferential enough to precedent, no matter how wrongheaded.

For the purported institutionalist, the chief justice’s continued silence on the Dobbs probe will perpetuate the damage of the “egregious breach” the longer it persists.

It strains credulity to think that after two months, the court would still be in a posture of neither confirming nor denying anything about an investigation that it already announced, and one of the utmost importance.

This is about more than meting out justice to an individual for a single act.

That act was, in Roberts’s own words, a “betrayal of the confidences of the court”—a singular blow against this most hallowed of institutions.

When is the chief justice going to act like it?