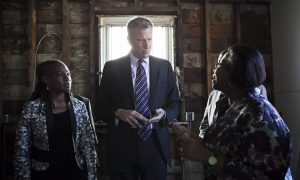 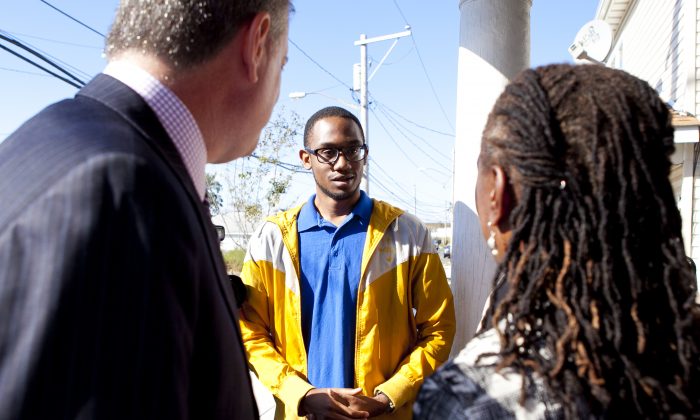 NEW YORK—Facing an avalanche of questions Monday about the city’s failing Sandy housing recovery plan, Build It Back, the mayor said he plans a complete review of the recovery work inherited from the previous administration.

Epoch Times reported last week that Build It Back has gone through nearly $10 million in funds since its launch in June, according to the city’s Sandy Tracker, but has not rebuilt a single home.

Also Monday, City Council member Mark Treyger, chair of a new council committee on recovery and resiliency, held a separate press conference to say that his committee would also be looking closer at Sandy recovery programs.The committee will hold a hearing on Build It Back in March.

De Blasio said, as he has in the past, that he wants to use the Sandy recovery as a chance to help low-income city residents.

“Some of the communities that were affected have been—you know, in many ways—neglected for decades,” said de Blasio at Staten Island Borough Hall after a closed-door meeting with Borough President James Oddo and other Staten Island elected officials. The mayor’s office declined requests for details about the meeting.

De Blasio said he will have a full recovery plan “in coming weeks.”

“I don’t think at this moment we have a clear starting point for that public discussion, and that’s our responsibility to put forward,” said de Blasio.

“This is not just about addressing fervent and immediate issues, it is also a transformative moment,” he added.

He also said he’s on a sharp learning curve.

“Build It Back—I’m still learning, and that will be part of our plan,” he said, adding, “The public deserves to know what our priorities are.”

The $50.22 million contract of the Philadelphia-based company administering Build It Back, The PFM Group, will also be scrutinized.

“We’re setting our own framework of how we want to proceed, our own personnel, and then we’re going to announce that,” said de Blasio in an answer to an Epoch Times reporter’s question about PFM. “So certainly any contracts in the process will be reviewed as part of that.”

Build It Back’s Director Kathryn Mallon recently announced her resignation, and the new director has yet to be announced.

Earlier in the day at City Hall, an alliance of labor unions and environmental and policy groups called on de Blasio to fix Build It Back.

The Alliance for a Just Rebuilding released a report Monday detailing problems with Build It Back, and issued a set of four recommendations on how the mayor can address them.

The alliance suggested that the mayor direct officials at city agencies to expedite the distribution of Sandy recovery funds, and fix issues with the application process.

The alliance and Treyger are also calling on de Blasio to reopen Build It Back to accept more applications. According to Make the Road New York, a community organization, Spanish-speaking renters affected by Sandy who called 311 were not consistently referred to Build It Back. In addition, the alliance states in its report that many New Yorkers did not know about the program before the registration period finished.

De Blasio visited the Bennett household in Far Rockaway, Queens, during his campaign in September of last year.

“That day Mayor de Blasio made a promise to my family and my community that he would right some greater wrongs by creating a pathway to rebuild and lift our neighbors out of poverty through the Sandy rebuilding process,” Bennett Bennett, the son in the household, said.

The Bennetts have since spent their retirement funds, their savings, and their daughter’s college fund in order to rebuild their home—only to be told that they have to elevate it to meet new building codes.

During his campaign for mayor, de Blasio promised to turn the Sandy rebuilding effort into job opportunities for people in the affected areas. The Alliance for a Just Rebuilding is keen about the mayor’s promise, and his greater agenda of tackling inequality in New York City.

The alliance report gives suggestions for how the mayor can use Sandy funds to reduce inequality, which include creating high-paying jobs, building affordable housing, and improving resiliency in public housing projects—all in line with promises de Blasio made on the campaign trail.