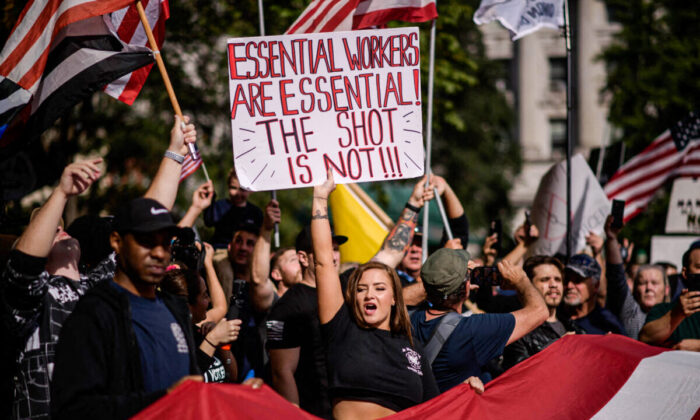 New York City Mayor Bill de Blasio said he expects to see a rise in vaccinations among municipal workers in line with his mandate, telling reporters that the “human reality” is city employees will decide to get the shot rather than face unpaid leave.

De Blasio made the remarks during an Oct. 28 press conference, on the eve of a looming Oct. 29 deadline for municipal workers to receive at least one dose of the COVID-19 vaccine, with no testing opt-out, or face being sent home without pay starting Monday, Nov. 1.

Thousands of municipal workers took to the streets in protests earlier in the week after de Blasio announced a sweeping mandate in the prior week requiring the entire municipal workforce to get vaccinated, with no testing option.

Asked by a reporter at Thursday’s press conference whether he was having any second thoughts about the mandate given the likelihood that some police, fire, and sanitation workers would rather quit or go on leave rather than get the shot, the New York mayor replied in the negative.

De Blasio referred to past experience with health care and education workers who were required to get the COVID-19 vaccine by early October.

“Look at the pattern, look at what happened with the health care workers. Everyone said, oh God, there’s going to be horrible dislocation. There was not. And we ended up with 95 percent of them vaccinated,” he said.

“Department of Education, tremendous worry what would happen. It is almost as if there was no transition whatsoever. We went right into the new reality. Ultimately ended up with 96 percent of school employees vaccinated,” de Blasio said.

As of Oct. 27, around 86 percent of New York City’s 378,000 municipal workers had received at least one dose of the vaccine, according to de Blasio’s office. The rates among first responders are estimated to be lower, with around 65 percent of firefighters and some 80 percent of EMS members vaccinated, according to updated figures de Blasio provided on Thursday.

In the face of opposition to the mandate, thousands of firefighters protested at the mayor’s residence on Thursday, raising concerns of walkouts and retirings. On Wednesday, New York Fire Department (FDNY) Commissioner Daniel Nigro said as many as 20 percent of the city’s firehouses could close on Monday and around 20 percent fewer ambulances would be on the roads due to staffing shortages, The Gothamist reported.

“Response times could double or triple. We have no idea what’s going to happen. Fires are gonna grow. Heart attack victims—we’re gonna be unable to reach in time. People stuck in elevators may be stuck in elevators for hours,” Andrew Ansbro, the President of the Uniformed Firefighters Association, told The Gothamist. “The basic services of the city are about to come to a near screeching halt.”

Asked at Thursday’s presser about the prospects for dismissal of those municipal workers who refuse to comply with the mandate, de Blasio said he hoped it wouldn’t come to that, but added that this was a possibility.

“What we’ve said from the beginning is our goal is not to fire people,” he said, adding that the city has the right to fire people for non-compliance.

“The consequence, which is profound, is not getting a paycheck,” he continued. “But the goal here is certainly not to see anyone leave City service, but get to a resolution and move forward.”

It comes as a recent Kaiser Family Foundation poll found that 37 percent of unvaccinated workers would quit their jobs if their employer required that they either take weekly COVID-19 tests or get vaccinated.