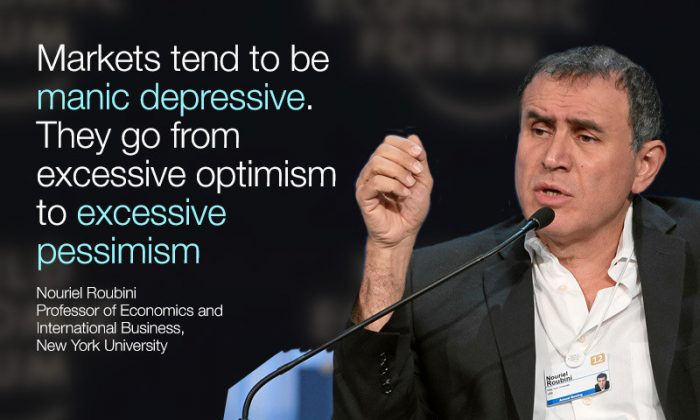 The theme of the meeting this year is “Mastering the Fourth Industrial Revolution,” which the WEF characterizes as follows: “A fusion of technologies that is blurring the lines between the physical, digital, and biological spheres.”

Inspite of this theme, the forum did not get around talking about China, which seems to be stuck somewhere between the second and third industrial revolution. However, in the discussion, the analytical lines of economist Nouriel Roubini, International Monetary Fund managing director Christine LaGarde, hedge fund manager Ray Dalio also got blurred.

Roubini said: “A year ago [markets] were believing in this rhetoric of the Chinese government, that China could achieve a soft landing, that it could maintain growth at 7 percent, that the Chinese were a bunch of ‘super-heroic technocrats’ who can do no wrong. But now they’re going to another extreme, saying that policy-makers are incompetent.”

The truth is probably somewhere between both extremes, he said yesterday: “My view for the last few years on China is that we will have neither a hard or soft landing. I would say China is going to have a bumpy landing.”

He may be right in his bumpy analysis although one could argue markets are finally waking up to the fact that Chinese GDP data is a product of the imaginations of the political planners and that there are real problems the central planners in Beijing cannot sort out.

Christine LaGarde on the other hand, is banking on the markets to sort things out in China: “Having a certain degree of volatility is OK. The market sorts out things eventually. There should be an acceptance that there will be volatility.”

One thing is for sure, the more Roubini’s central planners let the market into China, the more volatility there is going to be.

The founder of Bridgewater Associates Ray Dalio seems to have completely forgotten about how the economic machine works according to his own definition when he said this: “We’re going through a cyclical adjustment, and that will last maybe two or three years. It comes at a bad time for the rest of the world … but we’ll get past this. A bad year in China is going to be a great year in any other country.”

Dalio is spot on when he says credit is the most important element in the business cycle. But if he looked at how credit expanded in China and went into worse than useless projects, he would not say a bad year in China is a good year anywhere else.

Then we have Jiang Jianqing, the chairman of the Industrial and Commercial Bank of China who said: “China is still the locomotive of the world economy, accounting for a quarter of global growth.” Aside from the fact that China is not growing anywhere near the official 6.8 percent, China is also not adding to global growth because of its trade surplus, in fact, it is taking away growth from other countries.

One person who wasn’t at the Davos meeting was Crispin Odey, founder of Odey Asset Management. He is one of a few hedge fund managers who see the problems in China for what they are and bets against the Davos China story. He writes in his latest letter to investors:

“China’s problems are going global. The authorities will not be able to solve their four bubbles—in housing, the bank lending market, the stock market and their own currency—with current policies. This is a $29 trillion problem area and current policies can only exacerbate overproduction and further price falls in anything connected with Chinese output. Ultimately the currency will have to fall and by at least 30 percent.”