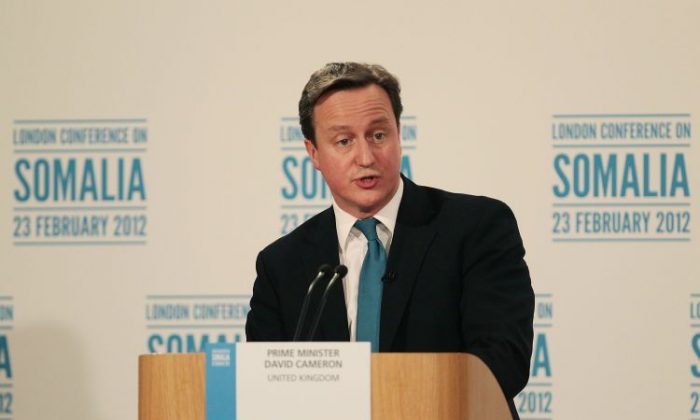 British Prime Minister David Cameron speaks to reporters during a press conference at the Foreign and Commonwealth Office in London as part of the London Conference on Somalia, Feb 23. (Peter Macdiarmid/AFP/Getty Images)
Europe

After British Prime Minister David Cameron visited the Sept. 11, 2001, memorial last week, he said that the U.K. is recommitted in the fight against global terrorism, but said pure military action is not the only solution.

“We’re never going to solve it just by military might, or the might of the U.S. in particular, on its own,” Cameron said in remarks delivered at New York University on Thursday.

Terrorism, he said, needs to be dealt with, with a multifaceted approach instead of just militarily.

“We need to combat terrorism with all the resources we’ve got, with the smart power, with the aid budget, with the diplomacy, with political moves, with bringing together and forming great networks and alliances,” Cameron said.

Adding further, he said, “Britain has a lot to offer on that front.”

Cameron stressed that there will never be enough military power to deal with the problem as a whole.

“If you take the example of Somalia, of course you’ve got to defeat [al-Shabab]. … But in Somalia, you’ve got a country where young people have no prospects, no hope,” he said, citing regional famines and divisions throughout the country in the wake of several civil wars. Because of all this, Somalia is a place “where people are better off becoming pirates than trying to work in the proper economy.”

To tackle longstanding social issues in Somalia and other countries that are said to have large networks of terrorist operatives, the British prime minister suggested humanitarian aid, diplomacy, and other options to deal with armed militant groups in the region.

Cameron recently held a conference in London with leaders of Somalia, United Nations Secretary-General Ban Ki-moon, and other Western leaders, including State Department Secretary Hillary Clinton, to push for a centralized government in Somalia. The group of delegates said they would pledge more aid and train troops in the country if the current administration in Mogadishu can form a permanent government.

“I described the intervention as necessary, legal, and right, but maybe I should have added a fourth word, which was achievable,” Cameron said. “We knew that, actually, we had the military power to achieve what was necessary, to allow the Libyans to try and take control of their own country.”

Britain along with France were the strongest proponents of imposing a no-fly zone over Libya supported by airstrikes and were among the most active members of the coalition once the airstrikes began a year ago, on March 19, 2011. The mission had received criticism several times after civilians were killed in the airstrikes.