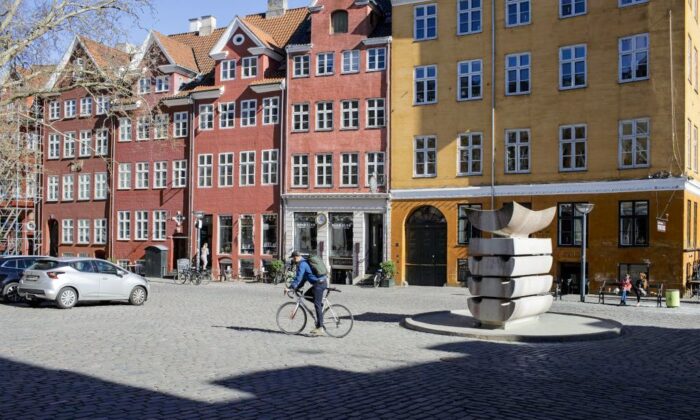 People are seen at the Graabroedre square in Copenhagen on April 22, 2020 (Thibault Savary/AFP via Getty Images)
WORLD

Coming a month after Denmark removed all COVID-19 restrictions, the top Danish health official warned that the country may be locked down again if more people aren’t vaccinated.

“Even though we are at an incredibly high level … if we are to keep Denmark open, then we must have more people to get the vaccine,” Minister of Health Magnus Heunicke told Danish channel TV2, adding that new shutdowns could be likely in the near future.

In September, Danish authorities in the highly vaccinated Scandinavian nation ended the last of its pandemic-related restrictions as health officials there said COVID-19 is no longer a “critical threat to society.” Denmark appeared to have been the first European Union nation to issue such a declaration.

However, Heunicke’s comments this week to the broadcaster suggest that authorities are weighing their options. To date, approximately 75 percent of the Danish population is fully vaccinated, but data provided by the country’s health ministry shows that cases have been rising in recent days with more than 1,000 daily cases of COVID-19 over seven days.

“We knew there would be an increase this fall. But it is no secret that that increase has come pretty quickly already here in the month of October,” he said, according to an English translation.

Heunicke said that Danish health authorities previously stated they “will not hesitate to intervene if the need arises,” adding that “we have a very, very large support from the population to be vaccinated.”

“We have been promised, so to speak, by health authorities that when we had the vaccines … we got rid of restrictions and shutdowns,” Geertsen told TV2.

Denmark was one of the very first European nations to impose a lockdown in March 2020 and forced the closure of many businesses and schools. Throughout the course of the pandemic, like others, the country has relaxed and tightened lockdown measures.

On April 21, Denmark also became one of the first countries to implement a COVID-19 vaccine passport system. At the time, Danish Council on Ethics had requested that the vaccine pass be used for the shortest time possible and protect private information.

Earlier this month, Denmark said it joined Sweden and Finland in restricting the usage of Moderna’s COVID-19 vaccine for younger age groups. However, Danish Health Agency later told news outlets that its “recommendations have not changed,” appearing to rescind the previous order.