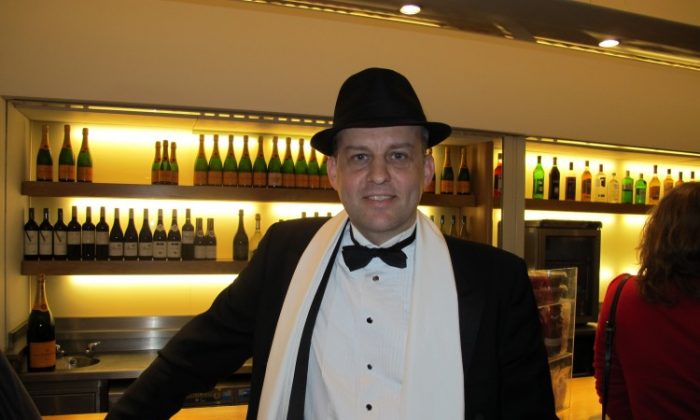 David Armes, an insurance underwriter with Lloyds of London, also attended Shen Yun with his wife. (The Epoch Times)
News

LONDON—The director of a Danish consultancy flew to London from Denmark especially to catch the evening performance of Shen Yun at the London Coliseum, on Saturday, Apr. 14.

Morten Vesterager, who previously saw the show in Aarhus, Denmark, in 2009, said that it was “a unique opportunity to discover an ancient part of Chinese culture”.

He particularly enjoyed watching the story-based dances, which the company is known for. “It’s the spiritual elements that are amazing to me,” he said. “The lotus dance was a wonderful surprise.”

Lotus Leaves features dancers with “unique full-circle fans [that] sway like lily pads in the wind, evoking scenes of a flowering lotus garden in the summertime,” according to the Shen Yun programme book.

New York-based Shen Yun Performing Arts International Company has played to four full-houses at the London Coliseum so far, and will perform once more on Sunday, Apr. 15.

James Phillips, a construction manager, saw Shen Yun with fiancee Virginia. He said the show was excellent and outstanding. “I can fully appreciate the dedication [that went into the] performance,” he said.

Shen Yun Performing Arts’ mission is to revive the 5,000 years of China’s divinely-inspired culture, according to the company’s website. Each performance features a blend of classical Chinese dance, and folk and ethnic dance, as well as songs and a full orchestra that combines Eastern and Western instruments.

Mr. Pearson, a retired advertising professional, attended the show with his wife. He was impressed with the scope of the performance and Shen Yun’s ability to bring the long history of Chinese culture to a Western audience.

“What [Shen Yun is] combining is the best of all worlds, because you’re showing dance, you’re showing opera, and even the orchestra, which is the traditional instruments,” he said.

David Armes, an insurance underwriter with Lloyds of London,also attended the show with his wife and expressed his enjoyment of watching Shen Yun. “I think the singing is absolutely superb. The dance is brilliant, and the costumes are really vibrant,” he said.