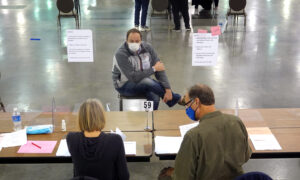 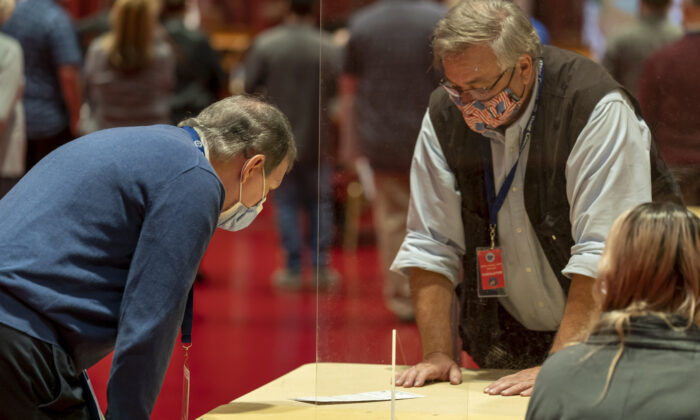 A representative for President Donald Trump (L) looks over a ballot during the presidential recount for Dane County in Madison, Wis., on Nov. 20, 2020. (Andy Manis/Getty Images)
Wisconsin

“However, we still need a few hours to reconcile the numbers and complete paperwork,” he said on Twitter.

Before the recount, Democratic presidential nominee Joe Biden had 260,157 votes to President Donald Trump’s 78,789 votes, according to unofficial results from McDonell’s office. Biden was ahead statewide by about 20,000 votes.

At stake are Wisconsin’s 10 electoral votes.

Dane and Milwaukee counties started recounts on Nov. 20, after the Wisconsin Elections Commission approved a partial recount request from Trump’s campaign. The campaign paid $3 million for the recounts in the two counties.

Trump wrote on Twitter on Nov. 28 that the recount “is not about finding mistakes in the count, it is about finding people who have voted illegally, and that case will be brought after the recount is over, on Monday or Tuesday.”

“We have found many illegal votes. Stay tuned!” he said.

Milwaukee County finished its recount on Nov. 27. The end result there was Biden gaining a net 132 votes.

“I promised that this would be a transparent and fair process, and it was,” Milwaukee County Clerk George Christenson told the Journal Sentinel.

Several legal matters are ongoing in Wisconsin with regard to election results.

One group filed an emergency petition asking the Wisconsin Supreme Court to block the certification of election results because of alleged irregularities. In a response filing on Nov. 27, state election officials said the petition made arguments that rest “on the flimsiest of legal and factual bases.”

Another lawsuit filed last week also seeks to block the state’s certification of election results, arguing that all ballots cast via drop boxes are illegal and should be discarded.