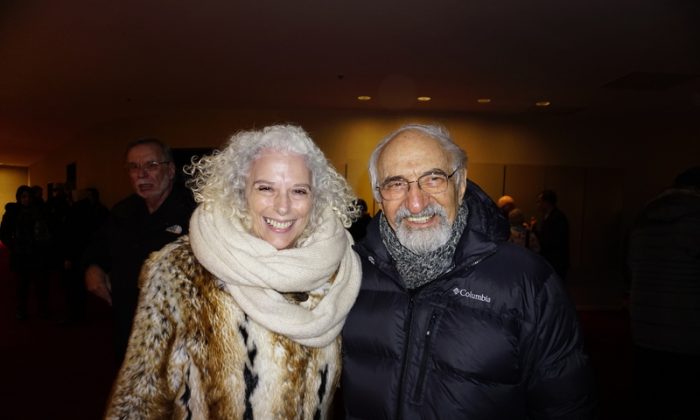 Jake Garfield (L) and Mark Abed after a performance by Shen Yun Performing Arts at David H. Koch Theater at Lincoln Center, on the afternoon of Jan. 10, 2015. (Pamela Tsai/Epoch Times)

NEW YORK—Jake Garfield can be proud of her artistic accomplishments. She has created jewelry for 25 years, inspired by Japanese Kumihimo loom braiding, while also maintaining a career as a jazz and modern dancer.

But Shen Yun Performing Arts has filled her with new inspiration. She attended the New York-based company’s performance at the David H. Koch Theater at Lincoln Center on Jan. 10. Shen Yun focuses on classical Chinese dance, an art form with a history of thousands of years.

Ms. Garfield said Shen Yun “shows the beauty of the human spirit and the mystical spirit.” She admired the graceful movement of classical Chinese dance.

While this dance form includes jumping and leaping, turning, and flipping, it also includes hundreds of exquisite movements and postures, according to the Shen Yun website. The website explains: “Even though many of these poses might look very simple, they actually require the perfect coordination of every part of the body.”

Ms. Garfield was also struck by the “flowing and elegant” costume design and overall display. She hopes to incorporate this style into her jewelry design.

Mark Abed, a network designer with AT&T, accompanied Ms. Garfield. He was also amazed by the brilliant display: “The colors—wow! What color combinations!”

What impressed him most was the performance’s “flow of beauty and grace.”

“I would say that it shows women as truly beautiful,” Ms. Garfield said.

“And men when they were really men!” rejoined Mr. Abed.

“You better go and see it, because you can’t describe it!” Mr. Abed said. “You can’t get that experience without being there!”